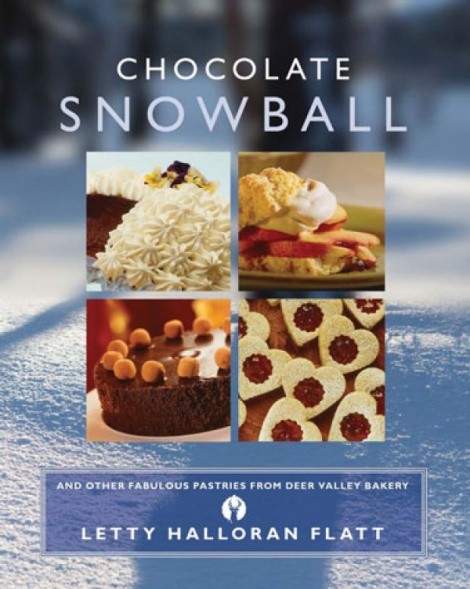 Though some ski enthusiasts have to trade living a few years frugally for the chance to spend that time carving turns on Utah’s famous snow, self-proclaimed ski bum Letty Flatt is the ultimate success story. Flatt catapulted from ski patrol to a position as Deer Valley’s head pastry chef—a position she’s held since 1988—and later as a dessert-cookbook author, all while skiing several days a week.

“Somewhere along the line, I got it in my brain I could write a cookbook,” Flatt says. “I got to write the recipes and decide which we’d print, then test them. ... That was the best part.” The large-scale batches she makes for the resort—such as her 700 daily jumbo cookies—don’t transfer to a home kitchen; modification was necessary. In 1999, Chocolate Snowball and Other Fabulous Pastries From Deer Valley Bakery was released. Flatt says. In late 2010, a second edition was released in paperback that included new recipes.

The chapters’ order mimics a bakery day—starting with bread-baking, moving through breakfast pastries and cookies, then cakes, ice creams and sorbet, followed by “Odd Stuff.” A baking day is like a ski day, says Flatt, who rated each recipe like a ski run, indicating difficulty, from Beginner to Double Black Diamond. “A new baker might choose more gentle ‘slopes’ to start with,” she says. One chapter covers high-altitude baking—Deer Valley’s lowest lodge rests at an altitude of 8,000 feet—although the recipes are written and tested for sea level.

The Chocolate Snowball, the classic resort dessert and her book’s namesake, while always delicious, is no longer her favorite: “I love fruit deserts and fruit tarts. My favorite is blue-cheese brust with Zinfandel poached pears,” she says. Away from the slopes and the kitchen, catch Flatt reading from and signing her new paperback on Feb. 12.