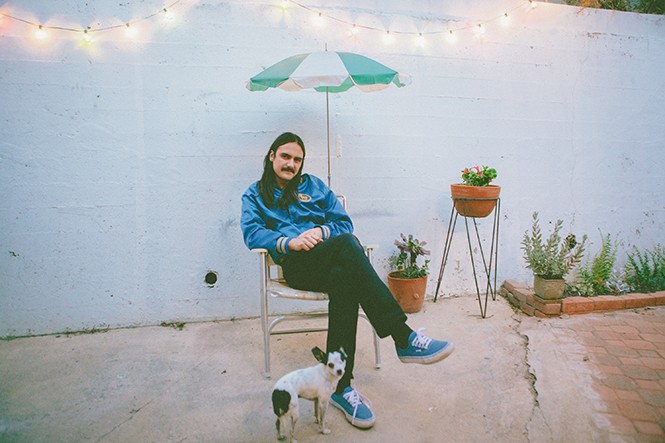 Michael Rault's new album came together in a very circuitous way. Begun in the Toronto apartment from which he was eventually evicted, then honed in his cousin's Montreal living room, It's a New Day Tonight was ultimately completed at Brooklyn's iconic Daptone House of Soul Studios.

Working with Daptone's producer and head engineer Wayne Gordon, Rault found more than just a welcoming atmosphere in which to record; Gordon and crew were so impressed by Rault's elaborate power pop arrangements and lush "guitarmonies" that they decided to sign Rault and release It's a New Day Tonight on Daptone's rock-focused Wick Records spinoff.

"I was battling against the limitations of my home studio setup during the making of It's a New Day Tonight, so working at Daptone was quite a bit more relaxing," Rault says. "I've always been into arranging, but working with Wayne was eye-opening in the sense of hearing the ideas I had in my head translated properly on the playback."

Recorded live to tape with minimal modern editing and patching techniques, the album snaps and crackles with '70s-inspired soul, raw drums and sumptuous strings, mixing with multi-part vocal harmonies and the layered guitars Rault has become famous for. That has translated well, Rault says, to the five-piece live show he's constructed for his current tour. Three guitar players cover the elaborate guitar arrangements, while Rault switches between six-string, 12-string and even piano for a few songs. "We've also come up with ways to approximate the string sections from the record, and we're singing three-part harmonies," Rault adds. "It's really fun. We've gotten an intricate arrangement out of a relatively small group of people, covering a lot of ground from the album while letting it become its own thing for the live show."

Rault acknowledges the steep learning curve required to reach that point, however. "I don't write or read music, so when I sat down to figure out how many parts to cover, it wasn't just a matter of me giving everyone charts. I had to make videos of me playing, give them to the band, and then go over them together. That was quite a challenge." Laughing, he adds, "You can see why they invented a system of music notation for situations like this."

It's less about the precision than the feeling with Michael Rault's music, however. The lyrics on It's a New Day Tonight run through themes of sleeping, dreaming and somnambulism, which in turn connect somewhat with his 2015 album, Living Daylight. Rault admits that lyrics used to come last in his creative process, and he tends to rely on a subconscious approach to writing them, often waiting until they bubble to the surface.

"If I see some patterns, I'll explore them more consciously," he says. "There was a lot of space between Living Daylight and It's a New Day Tonight, and the fact that the titles flow into each other was a coincidence. But that's one of the most interesting things about writing songs and records—sometimes themes and concepts pop up without you thinking about it, and these underlying threads start popping up that maybe you didn't intend to put there. There's a cohesion that maybe you didn't even attempt to create."

A similarly serendipitous occurrence also punctuates the sound of It's a New Day Tonight. Rault used a Heathkit pedal to create the fuzzed-out guitar that opens "Sleep with Me" and appears on other songs throughout the record, but he didn't come by the pedal easy. He first used a third-hand one in his hometown of Edmonton, Alberta, back in 2013 when he recorded Living Daylight, and he scoured eBay for years trying to find a replica.

After starting the recording sessions for It's a New Day Tonight at Daptone in 2017, he and producer Gordon swung into a music shop one afternoon, and there was another Heathkit, right in the window. The owner of the store tried to dissuade Rault from buying it, telling him it was worthless, but Rault persisted. "Maybe that reflects the luck that goes into everything," Rault laughs. "That was really weird and serendipitous. Even though I was excited to find the pedal, I was slightly freaked out, too. I hadn't seen one since I made the last record, and then all of a sudden it shows up while I'm walking down the street in Brooklyn."

Rault raves about both his time recording at Daptone and the support they've given him to pursue his dream. "The fact is, I went down there just to record, and after they heard my demos they decided to sign me and release the album," he says. "I didn't have a label, I didn't have management, and I knew I not only had to write and arrange the songs, but I had to figure out the logistics of everything, too. Having their resources was a huge shot in the arm, and it'll be nice to know I have them in my corner when I start the next record."

Another nice thing to know? That Rault and his band will have the ability to make it to their Salt Lake City show on time. The only other appearance they've made in the city came in 2016, when they were supposed to open for Whitney at Diabolical Records. "It's the only time ever that our band has been late," Rault says with a laugh, "so we ended up playing after Whitney for a much smaller crowd. We're excited since we only have to drive from Las Vegas this year to play a show actually at the time we're supposed to play it."