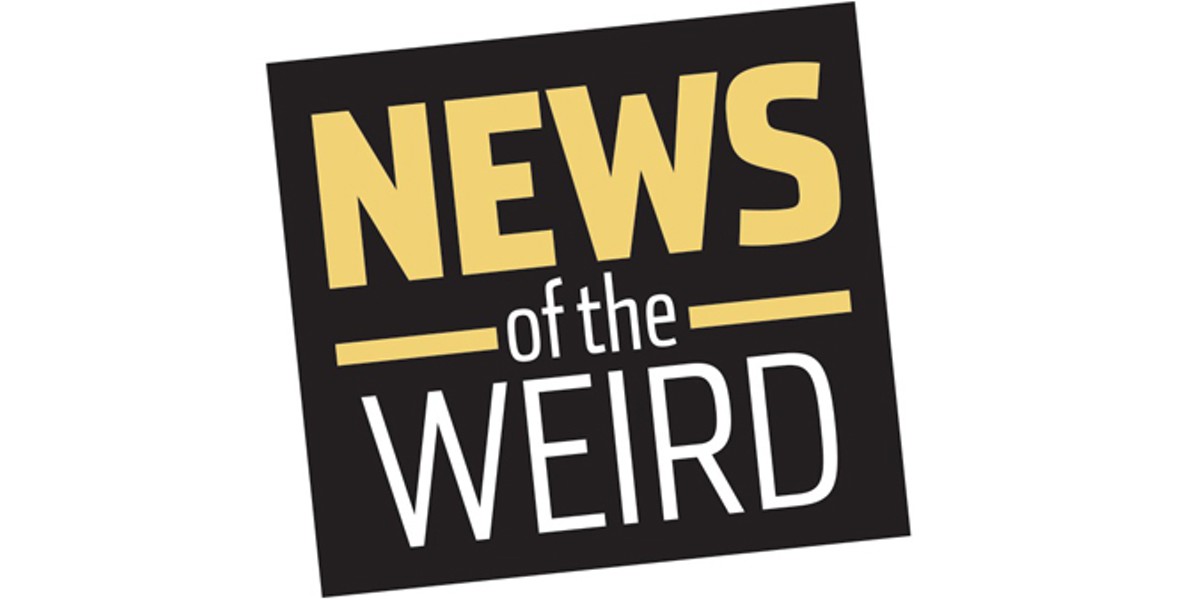 Democracy in Action
While "democracy" in most of America means electing representatives to run government, on Nov. 8 voters in San Francisco decided 43 often vague, densely worded "issues" that, according to critics, could better be handled by the professionals who are, after all, elected by those very same voters. Except for hot-button issues like tax increases or hardened legislative gridlock, solutions on these "propositions" (e.g., how certain contractors' fees should be structured, which obscure official has primary responsibility for which obscure job, or the notorious proposition asking whether actors in the taxpaying porno industry must use condoms) would be, in other states, left to elected officials, lessening voter need for a deep dive into civics.

Police Report
The police chief of Bath Township, Ohio, acknowledged the overnight break-in on Oct. 10 or 11 at the University Hospitals Ghent Family Practice, but said nothing was missing. It appeared that an intruder (or intruders) had performed some medical procedure in a clinical office (probably on an ear) because instruments were left in bowls and a surgical glove and medication wrappings tossed into a trash can (and a gown left on a table).

• A 35-year-old man was detained by police in Vancouver, British Columbia, in October after a home break-in in which the intruder took off his clothes, grabbed some eggs and began preparing a meal. The homeowner, elsewhere in the house, noticed the kitchen commotion and the intruder fled (still naked).

• Ashley Basich, 49, was arrested in Cheyenne, Wyo., in October and charged with DUI after police found her, late at night, using an industrial forklift to pick up and move a van that she explained was blocking her driveway. Problems: She works for the state forestry department and had commandeered a state-owned vehicle, she had a cooler of beer in the forklift and was operating it while wearing flip-flops (OSHA violation!), and the van "blocking" her driveway was her own.

• Though most Chicago Police Department officers get no more than five civilian complaints in their entire careers (according to one defense attorney), CPD internal records released in October reveal that some had more than 100, and, of 13,000 complaints over 47 years in which police wrongdoing was conceded, only 68 cases resulted in the officer actually being fired (although the worst police offender, Jerome Finnigan, with 157 complaints over two decades, is now in federal prison).

Compelling Explanations
Two men in rural Coffee County, Ga., told sheriff's deputies in November that they had planned to soon attack a science-research center in Alaska because peoples' "souls" were trapped there and needed to be released (or at least that is what God told Michael Mancil, 30, and James Dryden Jr., 22, causing them to amass a small, but "something out of a movie" arsenal, according to the sheriff). The High Frequency Active Aural Research Facility, run by the University of Alaska Fairbanks, has long been a target of conspiracists, in that "the study of the earth's atmosphere" obviously, they say, facilitates "mind control" and soul snatching.

Well, Of Course!
Motorist Luke Campbell, 28, was arrested near Minneapolis in September and charged with firing his gun at several passing cars, wounding one man (a bus passenger)—explaining to a bystander that shooting at other vehicles "relieves stress."

• Briton Mark Wright, 45, caught with illegal drugs taped to his penis following his arrest for burglary, told Newcastle Crown Court in September that he had "hidden" them there to keep them secret from his wife (perhaps identifying one place that she no longer visits).

Leading Economic Indicators
Paula D'Amore claimed she deserved a discount from the $7,400 "delivery room" charge for the April birth of her daughter at Boca Raton (Florida) Regional Hospital—because the baby was actually born in the backseat of her car in the hospital's parking lot. (Nurses came out to assist D'Amore's husband in the final stages, but, said D'Amore, only the placenta was delivered inside.)

People With Issues
A 49-year-old man was partly exonerated by a court in southern Sweden in September when he convinced the judge that he had a severe anxiety attack every time he received an "official" government letter in the mail (known as "window envelopes" in Sweden). Thus, though he was guilty of DUI and several other minor traffic offenses while operating his scooter, the judge dropped the charge of driving without a license because the man never opened the string of "frightening" letters informing him that operating a scooter requires a license.

Least Competent Criminals
Jacob Roemer, 20, was arrested in Negaunee Township, Mich., after a brief chase on Oct. 29 following an attempted home invasion. The resident had confronted him, chasing Roemer into the woods, where a State Police dog eventually found him lying on the ground unconscious and bloody, after, in the darkness, running into a tree and knocking himself out.

Recurring Themes
The most recent case in which an unlucky cannabis grower came to police attention occurred in Adelaide, Australia, in August when a motorist accidentally veered off the road and crashed into a grow house, collapsing part of a wall. Arriving police peered inside and quickly began a search for the residents, who were not at home.

• The latest market price for a coveted automobile license plate is apparently the equivalent of $9 million—the amount paid by Dubai developer Balwinder Sahni at government auction recently for plate number "5."

Readers' Choice
For not the first time in history, a fire broke out this year in a hospital operating room caused by the patient's passing gas during a laser procedure. The patient at Tokyo Medical University Hospital, in her 30s, suffered burns across her legs in the April incident, which was finally reported in the Japanese press in October when the hospital completed its investigation.

The Passing Parade
Asher Woodworth, 30, was charged with misdemeanor traffic obstruction in the Portland, Maine, arts district in October as he stood in a street after covering himself with branches of evergreen trees. A friend described Woodworth as a performance artist contrasting his preferred "slow life" with the bustle of downtown traffic.

A News of the Weird Classic (January 2013)
Anthony Johnson, 49, was convicted in October (2012) in Hartford, Conn., of stealing an improbably large amount of money—as much as $70,000 a weekend, off and on for five years—by crawling on the floor of darkened theaters and lifting credit cards from purses that movie-watching women had set down. The FBI said Johnson was careful to pick films likely to engross female viewers so that he could operate freely, and that he was often able to take the cards, leave the theater, and make cash-advance withdrawals from ATMs before the movie had ended.