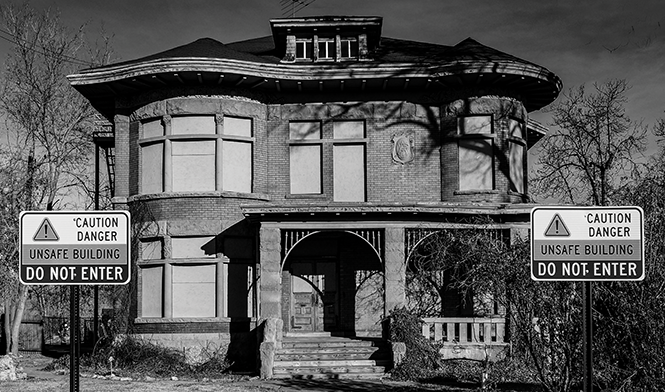 Nick Bagley, a professional medical photographer, combined his passions for photography and exploring abandoned places for a new book titled Abandoned Utah, which combines images from his journeys with information about those places' history. Bagley spoke with City Weekly ahead of an author event this week at Weller Book Works.

CW: What is about abandoned places that fascinates you?
My Mom kind of has similar interests, and we'd go on walks. There'd be some cool building, and she'd go over and look in the window. As I got older, I met other people who are into it too, and you realize you're part of this community. It's about the mystery, I guess. When I go into these buildings, it's like you're trying to explore the past.

CW: You relocated to Utah from the East Coast. Did you start researching ahead of your move to find out if Utah had the kind of places you liked exploring?
I didn't move here with that even in the back of my brain. I liked to ski, and I got a job offer. But I got really into the abandoned stuff a few years after I moved out here. It was an afterthought, but a happy afterthought.

CW: How long did the process of developing the book take?
I was fortunate. I didn't even submit a book proposal; the publisher saw my photos, and asked if I wanted to be part of this series. So it was just a year-and-a-half. ... But I'd like to do a book on [the abandoned places in] each state in the United States. I have a lot of bucket-list places I'd like to go.

CW: Do you do your research about the places you visit before you go, or does the visit lead to the research?
It's kind of a mix of both. A lot of times, I go and take the photographs, then when I sit down to write about it, I find out more. But even when you go in, it's still a mystery. It's natural for the human mind, when they go in a creepy place, to wonder. Hollywood has a lot to do with it; I'll go into some of these places, and it's like right out of Universal Studios. If I were in the movie, I'd expect something creepy to come from around a corner.

CW: Your photographs are a mix of color and black & white. What determines which format you choose?
A lot of it just has to do with the colors of the buildings. A lot of these places aren't really colorful anymore. If I see an abandoned house in a field, it's going to look so much spookier and intriguing in black & white. On a blue-sky day, I'm going to want to use color. But a lot of it has to do with the vibe, and how I feel while I'm there.

CW: It seems like abandoned places really become a history of economic decisions, of places that have been left behind because they weren't of value anymore.
That's one of the really curious aspects of every place I go. Especially if I don't research, and just find something, you wonder, what happened here? In some places, the mines didn't necessarily run out; it was World War II and they had to shut them down so people could go fight, but when they returned, they weren't profitable enough to reopen.

CW: The way you write about your visits to many of these places, it's clearly somewhat dangerous. Is there a thrill-seeking component to this interest?
It's a hundred percent part of it. A lot of these locations are relatively safe, but then you go into the abandoned mine shafts and stuff like that. I can't recommend that to people, especially if you don't know where you're going. ... I always let at least two or three people know [where I'm going]. Then there are times when I'm on my way and find something else and take a detour, and I don't have cell service, and it's like, oh well.

CW: A lot of these photos are full of graffiti at these abandoned places. What do you think the appeal is of leaving art in a place where almost nobody is likely to see it?
The people you see [tagging] billboards want the attention; the people in the basement of a building, they're doing it for the pure art aspect. I've talked to a few of them. There's people that are in it for a pure art form, in a place where they're not going to get harassed.

CW: What do you hope people get out of the book?
I want people to get out and start doing things, even if it's not necessarily what I'm into. With the pandemic and stuff, people got stuck at home and stuck in their minds, so I try to encourage people to get out and create their own adventure.