School’s in session every month at Desert Edge Brewery. 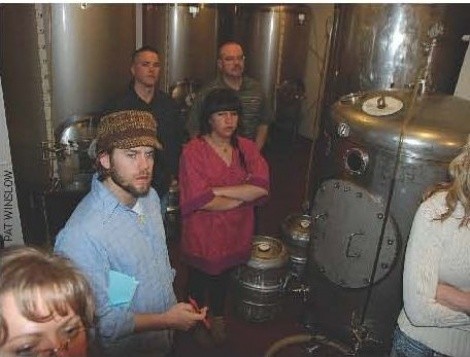 Meet the teacher: Brewmaster Chris Haas begins every morning with eight beers. OK, there’s a difference between tasting (on the clock) and drinking (off the clock). Either way, Haas’ charisma, jocularity and love of all things beer make him the perfect professor. “I don’t just like drinking beer, I like drinking a lot of beer,” Haas tells his 18 pupils during the Desert Edge Brewery Beer School, held on the first Thursday of each month.

The class started in spring 2002 and has been floating along like beer bubbles ever since. The one-evening instruction involves a guided brewery tour, sampling eight beers—four house and four seasonals—and a perfectly paired, four-course meal.

Haas, Desert Edge brewmaster since 1999, answers as many questions as his students ask, only stopping to drinker, taste—the current libation. Questions range from the specific and usually normally confusing to layman quaffers—sterilization concerns and yeast shelf-life— to talk of the basic “brew-haha.” After about 45 minutes, he leads the group back into the restaurant for the carbonated session of the class. While comprehensive and well-rounded, it’s mostly about understanding beer profiles and each person’s beer likes/dislikes, thereby making a microbrew drinker out of anyone. The beers are served from lightest to darkest, with students tasting eight in total. Additionally, the food courses, paired with every two beers, are made especially for Beer School and are never the same.

First, the light Backcountry Cream Ale has subtle barley and caramel flavors— perfect for a spring day. Then, the Happy Valley Hefeweizen finishes clean without much backend. Haas notes the grassiness from Mount Hood hops. These two beers were paired with grilled vegetable and spinach salad, served with a warm, sundried tomato vinaigrette.

Unlike their Czech counterparts, most American pilsners taste like angel tears, but Haas delivers with the full-bodied Pub Pils—described as having a pronounced sulfur and grassy smell, pleasant bitterness and slight hoppiness. Next, the Red Butte Bitter is an unfiltered ale, smelling of good soil; it’s rich and earthy with a sweet, stocky, hop flavor and “tastes like smelling a rose stalk,” says hop-lover Haas. “I want to make sweet love to Horizon hops.” The second dish was poppy seed-studded seared ahi with cucumber-jalapeno relish and ginger-mango coulis.

The drinks keep coming. “If you’re keeping track, you haven’t had enough,” says Haas, jokingly. The house Utah Pale Ale is a typical Northwestern pale with a floral bouquet. Then, the brown, seasonal Inversion Ale, with its in-house-smoked malts, was served. These two brews were paired with prosciutto-wrapped shrimp with artichoke tapenade and watercress. “No more questions! I have to drink!” Haas says. He then begins fielding questions by bouncing around the room, his voice unable to project over the noisy clamor.

Porters are a weakness for microbrew lovers. It’s the nighttime beer, a beer for lovers, a dessert beer. The seasonal Powder Shot Porter’s smokiness and sweetness hits all the right notes. But, the richness of Latter Days Stout paired with stout-barbecued baby-back ribs with white bean ragout and caramelized kale brought it all home. At Beer School, everyone leaves feeling both educated and buzzed.

A word of advice, however: Make plans to enroll sooner rather than later, since there’s a Beer School wait-list. Even without advertising, Desert Edge’s Beer School often books out for months.