Desert Noises’ new album was inspired by the open road 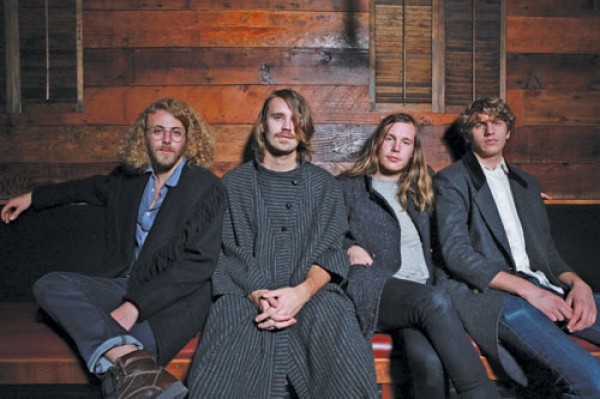 The first sound that emerges from Desert Noises’ new album, 27 Ways, isn’t a guitar chord or a drumbeat. Instead, it’s a wave crashing onto a beach, placing the record far away from Utah, the home of the rock/Americana band’s four members. After being on the road for most of the past couple of years, Desert Noises couldn’t help but be influenced by the experience when creating these new songs.

But 27 Ways isn’t just about traveling on literal highways leading toward the horizon. The title also speaks of the many metaphorical roads that people encounter in life, and the difficult process involved with choosing the right direction to strike out in—and accepting the consequences that follow.

In the 27 Ways track “Angels,” Desert Noises frontman/songwriter Kyle Henderson sings, “Played 27 ways to get out of town today,” a line he says is “supposed to represent the many different paths that you can go on, and the important part is to actually choose one and go for it. Because there’s so many different ways that you can go, I think people get stuck in just not choosing something, not taking the courage to actually get off the ground and go somewhere.”

In 2011, before he founded the Provo-based band, Henderson found himself at such a frustrating crossroads. “I felt stuck there for a long time and just wasn’t being honest to my heart of what I really wanted to do, and then finally just got the courage to say, ‘Hey, I’m just going to try this,’ ” he says. Putting Utah—as well as loved ones and the familiar Mormon culture he and his three bandmates grew up in—in his rearview mirror to tour and pursue music was “a lot of work and a lot of effort, and I don’t regret a moment of that, even though it was a very hard decision,” he says.

Henderson and the rest of Desert Noises—Tyler Osmond (bass), Brennan Allen (drums) and Patrick Boyer (lead guitar)—began recording 27 Ways in June 2013, while simultaneously crisscrossing the West to keep up with a rigorous touring schedule. “It was all a blur, a lot of it,” Henderson says. The album was released in March with Los Angeles-based label SQE.

27 Ways mostly sticks to catchy rock built around energetic guitar riffs and strong vocal harmonies, but surprises with moments of psych-rock (“Elephant Bed”) and slide-filled blues (“Dime In My Pocket”) as well. The album’s diversity is a product of “four guys that listen to different music their entire lives and they come together to play music,” Henderson says. “You get a little bit of everything.”

But the most significant influence on 27 Ways was the band members’ experience of spending so much time away from home and encountering an ever-changing landscape while on tour. The album is propelled forward with wanderlust-fueled energy, which contrasts with the often homebound feel of their 2011 debut full-length, Mountain Sea, written before Desert Noises left Utah.

All the experiences they had while on the road, Henderson says, “all those stories come out in the songs, in one way or another. Whether it’s the feeling of being somewhere else or meeting somebody, meeting new friends, all that, or sitting on the beach in North Carolina … it all plays a huge part in the picture.”

In addition to nodding to Desert Noises’ travel adventures—as heard, for example, in the ocean sounds in “Grandma Looks,” reminiscent of that beach—the personal songs on 27 Ways also delve into the sacrifices Henderson made when he formed the band, as well as the ongoing efforts taken by the foursome to balance their touring lives and home lives.

Henderson’s past unhappiness and heartfelt yearning to find his passion and true self is especially apparent in the lyrics of “Run Through the Woods”: “Wanted to be understood/ Tried in this town, but I couldn’t scream anymore at the voices inside of my head.” The track “Wild Trains,” he says, is about “getting home from tour and not really knowing what to do, and having these relationships fall apart or become better. …”

If Henderson’s songwriting is any indication, the days of hiding his true emotions are far behind him. On 27 Ways, he says, “I was trying to be honest with myself and honest with the experiences that I’ve had or the feelings that I’ve had, and not hold anything back, even if it was maybe not something somebody wants to hear, or maybe not something that I want to express. But I think it came out either way.”