Some are near mythical, but ice-climbing routes do exist in southern Utah. 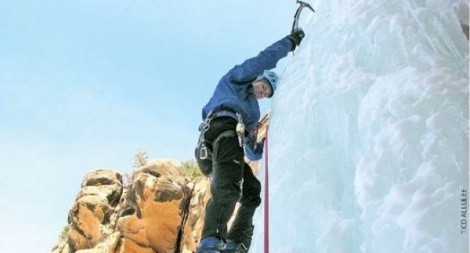 Ice climbing is a bizarre activity by any account: Strap several long, sharp steel points to various parts of your body and cast off into an ephemeral sea of sculpted shapes, using power and technique to scratch your way up. But eventually, routes tend to diverge into two categories: enjoyable, if not particularly engaging, outing; and white-knuckle, death-fall potential, gasping-for-air struggles.

Luckily, Utah has a different twist on ice climbing. Sinking a tool into crystal-clear ice that’s encasing a cactus, while looking out over buttes and sand, is a pretty unique experience among ice routes.

Ice in the desert is an anomaly. The conditions necessary for ice big and solid enough to climb are generally not found in the hot and arid climate of the American Southwest. But many Utah deserts are high enough to be consistently cold, and there is often enough water draining from the high mountains into canyon country to support large ice flows. Several areas in the southern deserts have ice routes of varying reliability—from routes that you can count on climbing every year to near-mythical flows that need rare and specific climatic conditions to appear. Many desert ice routes can be thin and difficult to protect, so skill and experience are important.

Joe’s Valley, near Orangeville, has by far the most reliable ice in the desert. Though Joe’s Valley is perhaps better known as a world-class bouldering venue, ice routes here were pioneered by Doug Coats and company as early as 1987. The Blackhawk and Castle Gate formation sandstone here lies at a relatively high altitude—between 7,000 and 9,500 feet—giving the ice a long and consistent season, with routes beginning to form in late November and lasting until spring. Most of the action happens in Straight Canyon, near the reservoir, where the routes can be seen from the road and usually have a beaten trail to their base, making for easy route assessment access. For those who want very long routes, look near Slide Lake, where routes form up to 1,000 feet long.

With lower temperatures and altitude, routes near Moab are harder to find. Many routes here don’t form every year, needing significant snow and extended cold to make an appearance. There is a route in Rill Creek Canyon that forms many years, and several flows of varying thickness appear in Castle Valley on the Porcupine Rim. The aptly named Icebox Canyon, on River Road (Route 128), has shorter bits of ice and the potential for longer ones. Ice in these canyons is fairly uncommon and generally thin; don’t expect thick, easily protectable routes. The north-facing walls on Kane Creek road occasionally form enough ice to climb, though these drips rarely touch down. Lowering down on a top rope is a good idea for those rabid enough to want to climb such features.

Rarer still are the legendary ice routes near Zion National Park in the southwest of the state. While there is much more water here than in other desert areas, the temperatures are rarely cold enough for water to freeze. Cascade Falls, east of Cedar City, starts at a high altitude and flows into the northern section of Zion Canyon. A hard cold snap can see climbable ice form on this stream. The northern part of Zion National Park, Kolob Canyon, is at a much higher altitude and tends to catch and hold more snow than Zion Canyon. This wild and less visited area is home to several short ice flows far from the parking lot, which adds another layer of gravity to any ice-climbing endeavor. Here, the bold will find longer routes, gorgeous panoramas and solitude.

More information about the routes, directions and info on other more conventional ice climbing in the mountains of Utah can be found in David Black’s Ice Climbing Utah (Falcon Publishing 2000).