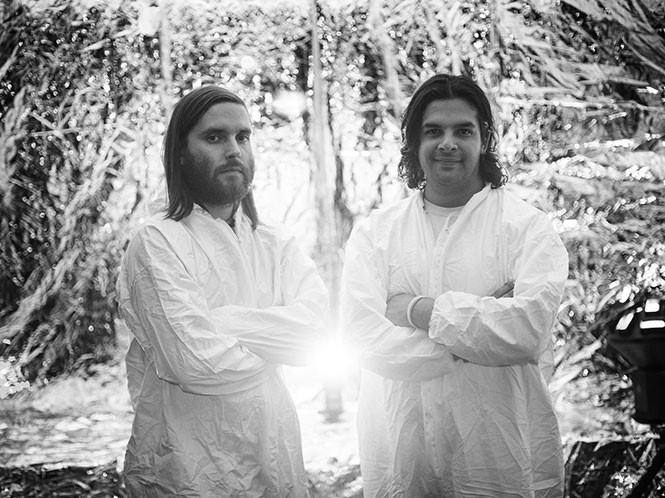 True to their name, the duo of Joshua Faulkner and Daniel Romero—Conquer Monster—is dominating the indie electronica scene in Utah. Through their combination of keyboards, synthesizers, audio gadgetry, old-school video game tech and a relentlessly fun live multimedia show, the group has become a must-see local act.

The project originally started in late 2010, when Faulkner teamed up with Rion Buhler to create sci-fi electronica heavily informed by the VHS era. The duo released an eponymous debut EP in October 2011, with Romero joining the group soon afterward. After some experimentation trying to work with a singer, Buhler left to pursue other interests. A duo once more, Conquer Monster got to work in earnest.

In January 2013, the pair began working on what became their 2015 album, Metatransit. Faulkner says they "wanted to make a concept album about a sci-fi dystopian future." While outlining a story that would help guide their songwriting, "we realized that making a comic book would be the perfect visual guide through the album."

The duo worked with Joshua Omen and Chris Black from Black Omen Comics to piece together a visual complement to the album—the comic book series Purge Worlds. The narrative follows the intergalactic adventures of a cybernetic assassin seeking to avenge the death of his partner.

Since Metatransit's release, the band's been performing as much as possible, scoring gigs with acts like Young Galaxy, D9, Laura Lamn and S2 COOL, and frequently collaborating with local favorites New Shack and Seve vs. Evan. The band's performances are hyperkinetic geek-fests.

Initially, Faulkner put guitar straps on his keyboards so he could play them like keytars, and be free to move around onstage, but says it "didn't work very well." Now the shows are simpler, incorporating science fiction-themed video projections—and keeping their instruments on stands, so Faulkner and Romero can dance around and have fun.

Conquer Monster plans to ride Metatransit's momentum and work with Black Omen Comics on a second issue of Purge Worlds, as well as a video game based on the comic. In the long term, they plan to release an eight-bit remix of Metatransit, and a possible EP with a yet-to-be-named Utah County band. In the meantime, they're crushing audiences, touring from the Rockies to the West Coast and playing both the Utah Arts Festival and Craft Lake City.

Portions of this story appeared online in March 2016 as part of the Gavin's Underground blog series on http://CityWeekly.net">CityWeekly.net