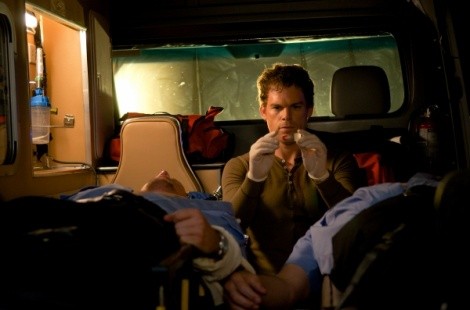 Season Premiere: It’s a year later, and Dexter (Michael C. Hall) has been pretty prolific for a single-father serial killer with a day job—he’s even on the hunt at his 20-year high school reunion. Season 6 has been preceded by all kinds of hype as a back-to-basics Dexter reset with religious “avenging angel” overtones (Edward James Olmos and Colin Hanks surface early as a mentor/protégé team who kills in the name of Christ), but, just as importantly, the humor is back (just one example: The aforementioned reunion is comedy gold). Lab letch Masuka (C.S. Lee) gets more screen time and his own subplot; newly promoted sis Deb (Jennifer Carpenter) is as foul-mouthed and twitchy as ever; Dex has a run-in with an octogenarian serial killer; and, best of all, the story-sucking union of LaGuerta (Lauren Valez) and Batista (David Zayas) is forked, over and done. Now quit bitching about Season 5 already.

Series Debut: Transitioning from serial killers to international terrorism, Homeland stars Claire Danes as a covert CIA operative who receives a disturbing tip from an informant in Baghdad: “An American prisoner of war has been turned.” Months later, a presumed-dead Marine sergeant (Damian Lewis) is rescued from Iraqi confinement after being missing for eight years; within days, Sgt. Brody’s an American hero and flag-waving symbol for the War on Terror—but is he really part of an impending attack on U.S. soil? All clues point to “Yes,” otherwise there would be no show beyond Danes acting like an obsessive lunatic whose own boss and mentor (Mandy Patinkin) barely believes her. Likewise, Brody’s wife (Morena Baccarin) suspects something’s awry, but she’s distracted by her own guilt for sleeping with his Marine buddy during the years Brody was “dead.” Homeland falls somewhere between 24 and Strike Back on the Terrorism-as-Infotainment scale: good for news junkies, but probably deadly dull for anyone who thinks Al Jazeera is the weekend weatherman.

Season Premiere: When last we left HBO’s most underrated little (heh) series, endowed man ’ho Ray (Thomas Jane) and ersatz pimp Tonya (Jane Adams) had reconciled and decided to jump back into the male-prostitution business, now with the public front as a “Wellness Center for Women” and without ball-busting partner Lenore (Rebecca Creskoff). Vindictively, Lenore has taken on a younger, hung-er stud (Stephen Amell) to compete directly with Ray—Hung is still more about economics than erotica (though there’s still plenty of that, too). Unlike HBO’s other returning series tonight, the flat How to Make It in America, Hung manages to find both the comedy and the heart in destitute times. Detroit hasn’t been this funny since Robocop.

American Horror Story
Wednesday, Oct. 5 (FX)
Series Debut: Two conclusions after watching the pilot of American Horror Story: 1. Showrunner Ryan Murphy has some seriously dark weirdness to work out after three seasons of Glee, and 2. The Walking Dead won’t be the scariest show on TV this fall. Dylan McDermott and Connie Britton headline a killer cast (which also includes Jessica Lange and Frances Conroy) as a couple who moves across the country with some heavy marital baggage and a teenage daughter (Taissa Farmiga) to Los Angeles into—what else?—a haunted Victorian. The setup is familiar, but the execution, from the deliciously Grindhouse-style opening and closing credits to the slowly stacking creepiness and tension in between, makes for the best horror movie no one’s made in years. At least, for the first episode, which is all FX has provided so far—let’s see if American Horror Story can sustain the intensity until Christmas.