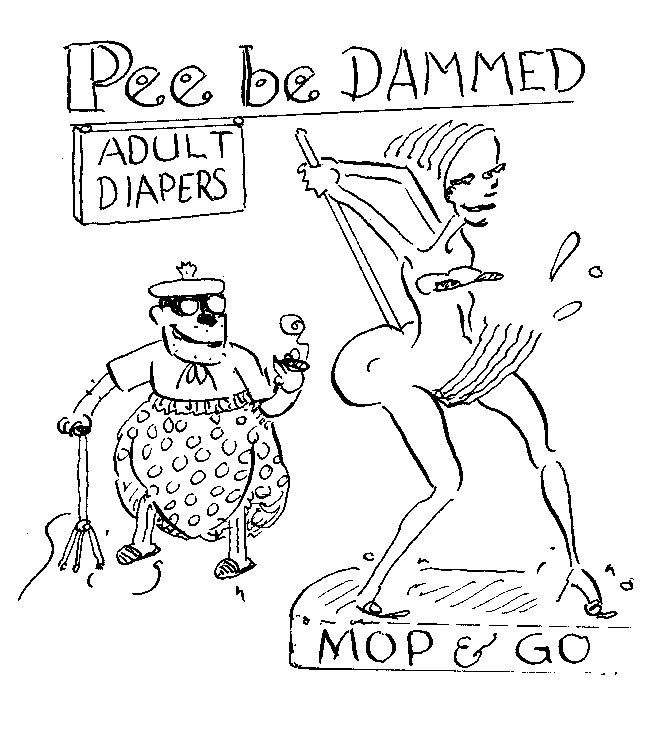 Incontinence products seem to be everywhere these days. When did the first diapers specifically for adults become commercially available?

If they aren't everywhere yet, they will be soon. The bladder-control biz expects to waterproof more geezers than tots within the decade, as birth rates dip and the baby boom grays still further. Adult incontinence soaked up $1.8 billion in profits last year, and the market could grow nearly 50 percent by 2020. Pretty good for a business that not so long ago could hardly get anyone to admit they needed its product.

Whether caused by childbirth, strenuous exercise, traumatic injury, or just plain aging, incontinence is nothing new, and ancient medical tomes reveal that folks have always sought means of keeping their downstairs dry. The Ebers Papyrus, an Egyptian text from 1550 B.C., discusses the condition and methods for treatment: for men, external urine-collection devices; for women, vaginal inserts to provide compression. Over the following three-plus millennia, doctors mainly refined these concepts rather than improved on them, unless you call the 18th-century penile clamp an improvement.

Meanwhile, babies had been going about their business as babies will, and parents had been using all manner of materials to keep their children's output in check. By the end of the 1800s, mass production of the basic diapering elements—fabric squares and safety pins—was well underway. Cloth diapers would remain the norm for decades until WWII shook things up. Women working the home-front assembly lines began using diaper services rather than washing their own, and with cloth in as short supply as time was, various inventors contributed to the evolution of the disposable diaper as we now know it. While the boys were heading home from overseas to breed a record number of Americans, Johnson & Johnson was developing what would become the first disposable diapers mass-marketed in the United States.

The fighting may have ended in 1945, but the Cold War was just beginning, and so was the space program. NASA learned the hard way that astronauts have the same biological needs as anyone else when Alan Shepherd wet himself while waiting for the Freedom 7 launch in 1961. At this point America's astronauts were all men, meaning urine could thereafter be easily collected in a bag or via a sheath-tube-pouch arrangement, while a larger bag attached with adhesive took care of number two.

Once NASA started putting women in orbit, though, the differences in female plumbing required new gear. The zip-up trunks first issued were soon replaced with Maximum Absorbency Garments, treated with sodium polyacrylate to absorb liquid, and these proved so effective male astronauts started wearing them too. Space-shuttle astronauts got three—one for launch, one for re-entry, and one because you never knew what might happen in space. NASA super-diapers entered the pop-cultural consciousness in 2007, you'll recall, when former astronaut Lisa Nowak, arrested in Orlando for an alleged attempt to kidnap a woman she apparently viewed as a romantic rival, reportedly told police she'd worn them so she could make the drive to Florida from Houston nonstop.

But that's all fine and good for astronauts—what about poor old grandma back on earth? Commercially available adult incontinence products were slow to arrive, in part because the embarrassing nature of the ailment made marketing a tricky task. Procter & Gamble—makers of Pampers, long the undisputed champ in babies' disposables—introduced Attends Incontinent Briefs in 1978, but these wound up being sold mainly to hospitals.

A new kid in diaper-town would change all that. The same year Attends made their debut, Kimberly-Clark began manufacturing Huggies, the first true competitor to Pampers. In 1983, they launched Depends and aggressively went after the mass market P&G hadn't managed to attract. The trick: to overcome the stigma that still clung to the condition using TV ads—some depicting older people remaining defiantly active, others relying on the powerful spokesperson the company found in actress June Allyson. Their gambit proved successful, with Kimberly-Clark commanding nearly half of the adult-incontinence market today.

No medical condition is too embarrassing to talk about on the tube in 2016, and Kimberly-Clark's recent campaigns have capitalized on this new frankness. The Depend line has also grown to include sleeker, more fashion-friendly incontinence underwear, now modeled by younger (and presumably continent) actors and athletes to show how undetectable they are. There's never been a better time to be a style-conscious senior with a decreasingly cooperative bladder.

For baby boomers, the expansion of the incontinence industry serves as a fitting bookend to their generational saga. They were the first kids to be regularly swathed in disposables, after all, and the ever-upward march of commercial diaper technology has taken place almost entirely in their lifetimes. Montage directors may choose to focus on civil rights and Vietnam and Buffalo Springfield, but the story of the U.S. baby boom is just as much one of stinky plastic diapers.