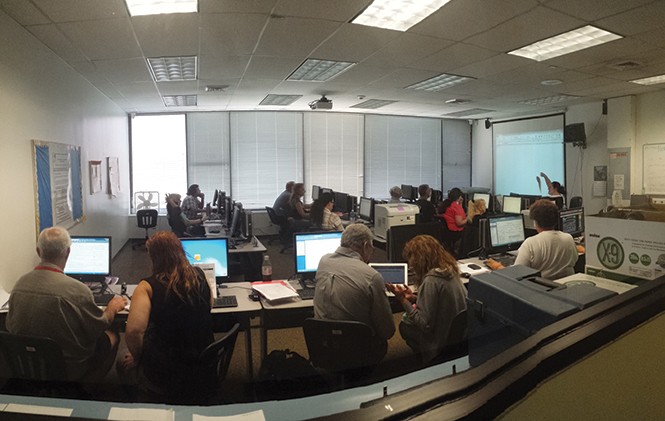 Lisa Kendall owns a laptop computer, a tablet and has access to the Internet. But when it comes to basic word-processing skills like cutting and pasting sentences, altering font sizes and creating a résumé, Kendall is stumped.

"I have all kinds of stuff, but it was the basic skills," says Kendall. A month ago, she began taking free computer classes offered through Salt Lake County's Community Access to Technology (CAT) program. "Now we know how to cut, copy and paste. For me, it's been a huge asset."

Kendall is one of the thousands of people who county officials say utilize the CAT computer labs each year. And on the morning of June 22, she was among a dozen people—including senior citizens, a pair of Mormon missionaries and two children—who tapped away on computers at the Central City Recreation Center. But the program, plagued by waning use, was cut by the Salt Lake County Council on June 23. On June 30, the labs at the Central City, Northwest and Redwood recreation centers will be closed.

A report given to the county council on June 2 shows that the four CAT labs, which have a $273,637 operating budget, were underperforming. The report, citing broad Internet access and sweeping changes to technology, calls the program "obsolete," and notes that the money could be better spent elsewhere.

But a few CAT employees, some of whom opted to leave early, told county leaders that the program was worth saving—a sentiment that seemed to resonate with some council members.

Councilwoman Jenny Wilson said she wanted to spare the program because it benefits an underserved population for a relative bargain. And, contrary to contentions that few residents would be impacted by the closure, Wilson said, "I see 3,500 people impacted by this program."

As a compromise, the council urged staff to analyze whether a shortfall in services occurs after the closures. If there is a gap, a fix could be created in next year's budget.

Aldrich and several others affiliated with the CAT program spoke in favor of its survival at a County Council meeting on June 18.

Since 2013, the CAT program has been administered through the county's Department of Aging & Adult Services—a poor fit, according to CAT employees who say the program aligns more closely with library services.

Becky Kapp, director of the Department of Aging and Adult Services, says CAT is being eliminated in part because it provides duplicative services. For instance, she says help with résumés and job-interviewing skills can be obtained through the state of Utah's Department of Workforce Services, and computer access is available at libraries.

But proponents of the CAT program say that libraries are ill equipped to provide the wide variety of classes that CAT offers. Additionally, computers are often in high demand at libraries, and time limits are enforced.

"Try interviewing somebody for immigration forms in an hour, or filling out a Department of Workforce Services form that's 16 pages," says Dorothy Owen, who retired from the county in 2014 as a social services grant coordinator, and among other duties, helped link up nonprofits with the CAT program. "You can't just find any old place to do some of this stuff."

The document presented to the county council seemed bent on ending CAT, saying that the program "is producing no effective return on investment and that changes in technology have created greater access for Internet access and training, effectively rendering this program obsolete." CAT supporters, however, say sheer numbers cannot adequately measure the success of a program utilized by a wide variety of people for many different reasons. In addition to computer access, in 2014, an income-tax assistance program offered in CAT labs processed nearly 3,000 tax forms.

The county's report says the program served 3,559 residents in 2014, but the computers sat idle for three of every four hours they were available.

In addition to cuts in hours—which some CAT employees say inevitably led to cuts in participation—CAT's woes can be traced to marketing, says Anabel Olguin, who worked at the Central City location until being told on June 8 that her position was being eliminated.

Chad Zipprich has been teaching computer classes at the Central City location for the past five years. He says his lab is filled with people all day. In the morning, older folks use the lab. By noon during the summer, it's filled with children. All the while, he teaches courses to whomever wants to partake.

"This is a resource that's going to be missed, I'll tell you that," says Zipprich, who on a recent morning was preparing to teach a course on PowerPoint. "It just doesn't make any sense why they're cutting this. It's crazy."

Update: Hours after axing its Community Access to Technology program (CAT), the Salt Lake County Council on Tuesday night changed direction, narrowly voting to keep the program running through the end of the year.

The program, which includes three computer labs that operate at the Northwest, Redwood and Central City recreation centers, was slated for closure so that the $273,637 allotted to the labs could be redirected to a new senior center in Midvale. A portion of the funds also would have gone to hire a data analyst for the county.

At its 1 p.m. meeting, the council voted to shutter the program under the condition that county staff monitor whether or not the needs of those who use the lab could be met by other programs.

Later in the evening, after City Weekly’s press deadline, Councilwoman Jenny Wilson, a Democrat, says the council voted 4-3 along party lines to let the program continue for at least three months while a “retooled” program is formulated for 2016.

Wilson says that it's extremely rare for the council to reverse a vote as it did on Tuesday.

“The Democrats are fully in support of the mission of the program, which is to support underserved populations with training and access to technology,” Wilson wrote in an email. “We are working today with Mayor McAdams’ staff to determine operations for the next few months.”