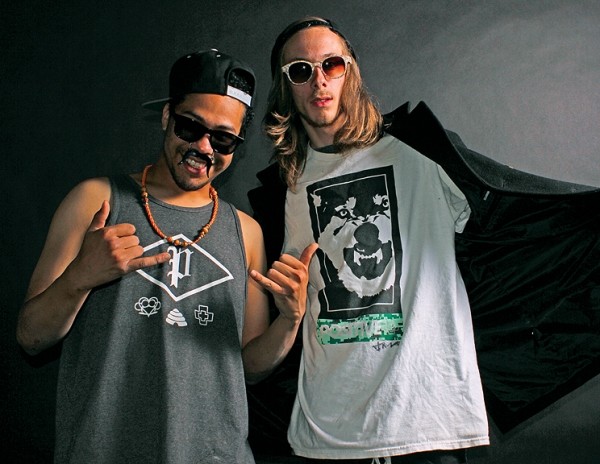 Though there are exceptions, it usually takes a substantial amount of time to become a worthwhile and entertaining rapper, one who is unique and not just a fusion of his influences—if you don’t believe me, go listen to early Black Hippy tapes. And that’s why Salt Lake City-based Dine Krew’s freshman EP, Dine and Dash, released Oct. 26, requires our immediate attention.

For the most part, Dine Krew has opted out of exhausted, regional clichés. There are no over-the-top nods to the beauty of the Wasatch, or to pawn shops on State Street. Instead, emcees Harrison Montgomery and Shelby Washington replace focused subject matter with off-the-cuff flow, hushed style and mellow tone.

“Piccolo (the main producer on Dine and Dash) will give us a beat and we’ll discuss some ideas, and really just play off the sound and vibe more so than the topic,” Washington says.

This willingness to rap with the beat structure, as opposed to over it, is arguably Dine Krew’s best attribute. On the 2 1/2 minute ballad “The Greater Neutral,” a sample of an exhausted man’s voice comes through in the beginning, saying, “I still can’t sleep. Days go on and on. They don’t end.” It’s a lush beat filled with chimes, a riffing guitar and bells that crescendo in the background. Guest producer Zerkseez lets it ride for a full minute until the man’s voice cuts back in with, “Loneliness has followed me my whole life. Everywhere. In bars. In cars. Sidewalks. Stores. Everywhere. There’s no escape.”

At first, the track feels like a dreamy RZA instrumental, but Harrison interjects at the very end, complementing the sample’s train of thought by rapping, “In a world full of flames you only burn one lighter, short gasps of air in between the gunfire. Umm, I, uuuh, I froze up a bit, into nothingness, a bad call from the umpire.”

The album somehow pulls off the bizarre feat of being refreshing and sleepy at the same time. Its only missing piece is the mixing and mastering. The levels are all over the place throughout Dine and Dash and the mics are often too high or too low—but it doesn't really matter. The production is beautiful, and Washington and Harrison convince you that what they’re doing belongs in the same breath as jazz-heavy artists like Chicago’s All Natural or the Typical Cats. The only difference is Dine Krew takes it further and comes across as less corny.

“I rhyme when I sleep, call me the subconscious merchant,” spits Harrison on the track “Most Living on What’s Hyped.” Dine Krew’s sound is tough to nail down, but what’s certain is that this is raw, locally manufactured experimental rap in its purest form.

“Listen to it at night,” said Washington via a Facebook message a few weeks back. I laughed when I read this, but he’s right. The album explores the depths of late-night streams of consciousness, artful narratives, weed-smoke tangents and inspiration from the 4 a.m. glow of a Macbook.

Of course, much of the credit can be handed to their producer, Andrew Auman, aka Piccolo. Though local beatsmiths Zerkseez and Rightstar also contributed to Dine and Dash, it’s Piccolo’s penchant for thumbing through obscure samples that pairs best with Washington and Harrison’s melodic flights of fancy. On the track “Bap Boom,” Piccolo shows his prowess, chopping up a moody, atmospheric orchestra sample while lacing it over a dusty, clip-clopping drum kit. The result is Washington and Harrison exchanging watery raps like a pair of drifters passing a canteen in a Spaghetti Western.

Though the members of Dine Krew are all 22 years old and Dine and Dash is their first release, it reeks of studied backpackers who spent the past two decades combing over B-sides of Heltah Skeltah, Wu-Tang and Dungeon Family. “This is just something we do naturally,” Washington says. “I was raised on Quest and Public Enemy. We might be the last generation to be raised on good rap.”