Dining | Cliff Notes: Does a new chef, new menu and new GM add up to a new Mayan Adventure? 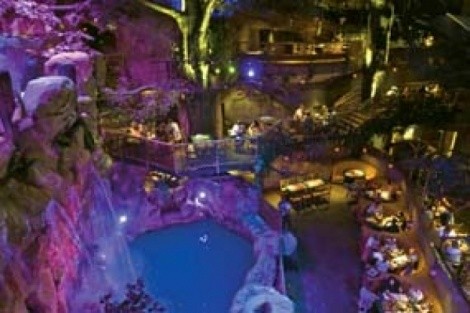 “Ted, your Mayan adventure is ready to begin!” And with those words—the manner in which customers at Mayan Adventure restaurant are told their tables are ready—I followed my host into the inner sanctum, something I never thought I’d be doing again. The last time I wrote about The Mayan—shortly after it opened in 2000—I swore I’d never return. I absolutely loathed the food, the service, the ambience and just about everything else about the place.

So why on earth would I come back? Well, I do try to be fair to restaurateurs—even guys like Larry Miller. And so, when I heard that Michael Smith, the new Mayan GM, and a new “masterful” executive chef, Dorian Kidd, had arrived on the scene to turn this restaurant around, I thought it only fair to give them a second look. After all, a recent review in About.com gave The Mayan four stars. The Mexican cuisine, which used to consist of Taco Bell-quality burritos, enchiladas and tacos, was now, I was told, “authentic and fresh.” Hey, why not? This might even be fun. So we piled the family into the car and headed to Jordan Commons.

In case you haven’t heard, the Mayan Adventure is a Disney-esque dining experience. As I wrote in my first Mayan review, the place reminds me a lot of a Denver restaurant I used to visit called Casa Bonita. Apparently, it reminded the folks at Casa Bonita of their restaurant, too; they sued Larry Miller in 2000 for violation of intellectual property rights and unfair competition for stealing their concept, which includes cliff divers. According to a Larry H. Miller spokesperson, the case was later dropped.

Now, I have nothing against cliff divers. I just don’t want them splashing water on me during dinner. As we nibbled on a yummy pork empanada appetizer (four shredded pork and sweet potato-stuffed empanadas for $6.95), young “Mayans” began banging on drums up on the faux 30-foot cliffs. They were adorned with what may or may not have been Mayan body markings—check with your local anthropologist or tat artist—as well as headdresses and loincloths. They also looked awfully tall and white to me for Mayans, even in the dark, cavern-like lighting of the sprawling three-level theme park. There was a brief story about a Mayan corn princess or goddess—I couldn’t quite hear it with the sound of rumbling earthquakes, waterfalls, exotic birds and volcanoes going on around us—and then suddenly the Mayans launched into a dinnertime diving competition.

I wished I had an Olympic-style scorecard. They were good. They were very good. But not as good as the Queso Especial ($6.50), a generous bowl of melted Monterey Jack, queso blanco and cotija cheeses, along with refried beans and fresh pico de gallo for dipping. The tortilla chips at The Mayan seem to be homestyle, a little thicker than typical, and are perfect for scooping up that killer queso. The leftovers tasted terrific reheated the next day.

Unfortunately, our batting average with Mayan entrees was only about .500—great for baseball, not so great for dining out. Tortilla-crusted shrimp ($16.95), in which the shrimp coating is made from crunchy tortillas crumbs, sounds better than it was. First, the so-called “jumbo” shrimp were in fact large shrimp at best, butterflied then coated with tortilla crumbs and fried until tough and tasteless as a Mayan sandal. What should have been an appealing side dish of fresh warm spinach with slices of sweet onion was so salty that I couldn’t eat it. When I mentioned the salt factor to my server, her response wasn’t to fetch me a new, unsalty, spinach salad but rather to say, “Yeah, that happens in the kitchen sometimes!” FYI, the Mexican rice and refried beans at The Mayan are equally dreadful.

Everyone liked the fajita tortilla bowl, a big deep-fried tortilla filled with nicely flavored medium-rare slices of tender flat-iron steak with sweet onions, roasted poblano peppers and black beans ($13.95). Another hit—and my favorite dish of the evening—was the beef machaca chimichanga ($11.95). For those of you who haven’t spent much time in Arizona, where I believe the chimichanga originates, it’s essentially a deep-fried burrito. In this case, it’s a large flour tortilla stuffed with very tender, juicy, shredded top round steak, which is first stewed in salsa then cooked with Monterey Jack. It’s not exactly a diet dish, but, oh, my Lord, is it tasty! Even I, a cilantro-hater, loved the cilantro-lime crema which accompanies both the chimichanga and the pork empanada appetizer.

The Mayan was out of fish tacos, which we’d hoped to try. “We couldn’t get any tilapia,” explained our server. I was going to suggest they try Smith’s or Albertsons, or maybe fishing around the lagoon next to our table, but instead ordered the wild Alaskan salmon ($16.95) since the server—who was from Alaska—said “I know salmon and this is the best salmon I’ve had outside of Alaska!” Well, I’ve never been to Alaska, but I’ve eaten few salmon dishes less memorable than this thin filet of bland, overcooked fish, cilantro pesto coating notwithstanding.

On the way out the door, I spotted a menu of nightly specials we’d not been informed of, including Ancho citrus shrimp, Mayan rotisserie chicken pot pie and homemade pineapple fritter. Maybe I’ll give those dishes a try when I return to Mayan Adventure—in another eight years.