Dining | DV OD: For a foodie weekend at Deer Valley, too much was just right 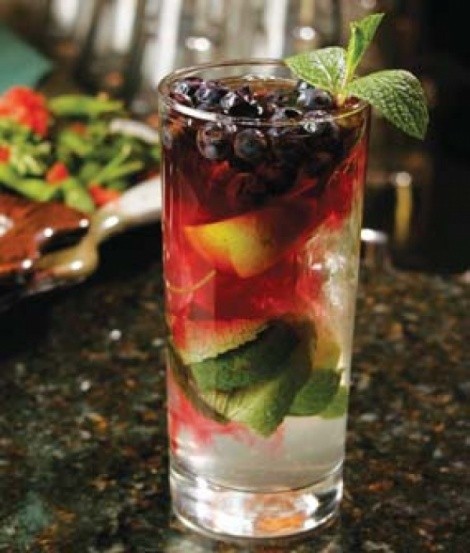 I could diet and detox for the next month and probably not undo the damage I did during three fun-filled days at Deer Valley Resort this month. I think I’ve finally found my food and wine intake limit.

It goes without saying that I could never afford to visit Deer Valley for three days of eating, drinking and skiing on my own. My visit to the No. 1-ranked ski resort in North America was courtesy of the Deer Valley marketing/PR mistresses—Erin and Emily—who invited a gaggle of media types up for a weekend designed to showcase the resort, and especially its fine culinary fare. It’s no secret that I’m a fan of the longtime chefs at Deer Valley, some of whom have been on board since the resort opened in 1981. Still, it had been too long since I’d had the opportunity to dine at Deer Valley hotspots like Royal Street Café, Seafood Buffet and Fireside Dining, so I loaded up my skis and an overnight bag with warm jammies and headed east.

First stop: Deer Valley’s Fireside Dining ($50 adult/children $26), where the resort’s director of food and beverage, Julie Wilson, joined our group for dinner. Congratulations to Wilson are in order, by the way, for earning a Lifetime Achievement Award from Salt Lake magazine at the publication’s dining awards last month. Wilson is one of those Deer Valley employees who has been part of the team since Day 1, ably assisted by newer talented employees like Carolina, our brilliant Brazilian server. Fireside Dining at Empire Canyon Lodge is a four-course affair, with each course served from one of the stone fireplaces at the lodge. Begin anywhere you like, but it makes sense to head first for the Swiss raclette, which is melted onto individual plates right over the fire. To accompany raclette, there are steamed new potatoes, cured meats like prosciutto and bunderfleisch, house-marinated pearl onions, cornichons, crunchy fresh-baked baguettes and even mustards and chutneys made from scratch in the Deer Valley kitchens.

Having successfully gotten my cholesterol headed northward on raclette, I ventured to a second fireplace where veal and mushroom stew, chicken and tomato fricassee and fire-roasted quail were being served. I had all three, then slow-roasted leg of lamb along with Deer Valley’s amazing take on macaroni and cheese: penne pasta and mushrooms in a creamy gruyere sauce spiked with pancetta. Wilson had chosen lively Barbera d’Asti and Gavi wines from Italy to accompany our meal, which was punctuated with a cozy sleigh ride courtesy of Jack, our chaps-clad driver. Finally, at fireplace No. 4, I loaded up on biscotti and assorted fruits to dip into my trio of fondue sauces: caramel, chocolate and white chocolate Grand Marnier. Nothing beats chocolate-dipped pineapple.

When Saturday morning rolled around, I couldn’t imagine eating again. But, hey, I’m a professional, so a launched into a delicious helping of eggs Benedict at Snow Park Lodge, sprinkled with almonds. My cholesterol at this point must have been Guinness World Records-worthy, so I set out for three hours of skiing before lunch, hoping to offset at least a little of the damage of eggs Benedict with rich, silky hollandaise.

For lunch, we found ourselves at Sunset Cabin, just off the Birdseye ski run at mid-mountain. Sunset Cabin is geared for private parties of 15 or more, a cozy little spot where cheese fondue (gruyere and ementhaller cheeses with white wine, garlic and kirsch—and, yes, more cholesterol) is the name of the game, served with traditional accoutrements and not-so-traditional offerings such as Cristiano Creminelli’s truffle-infused salami. Well, OK … maybe I’ll have just a little splash of Riesling with that. Florian Cosma, our affable Romanian host, made the Sunset Cabin experience a truly enjoyable one.

At Deer Valley’s Seafood Buffet ($60 adult/children $32) on Saturday night, I promised myself that I’d eat light. And indeed, for the first hour or so, I limited myself to a couple dozen oysters on the half-shell, a mess of stone crab claws, steamed tiger shrimp, King crab legs and the occasional dollop of spicy ahi tuna from the sushi bar. But, by my third glass of Russian River Pinot Noir—hey, I’m not driving!—I found myself sucked into the hot food stations where I just couldn’t resist roasted prime rib with natural jus, steamed New Zealand clams, scrumptious ribs with a bourbon barbecue sauce and cilantro lime glaze, and honey-soy glazed blue nose bass with heavenly ginger sauce. Luckily, I’d saved just enough room for a plateful of executive pastry chef Letty Flatt’s raspberry truffle brownie, chocolate snowball, apple tarte tatin and oh … my … God … her delectable praline panna cotta with hazelnut crème anglaise. At this point, I could actually hear my arteries hardening.

I will drink only water today, I said to myself as I entered Royal Street Café for Sunday lunch. And yet, within minutes, Royal Street’s manager Patty Johnson had placed an award-winning Deer Valley cocktail—the Blueberry Mojito in front of me—along with a brand new yummy concoction of raspberry and citron-flavored vodkas called the Holly Berry. So throwing caution to the wind, I ordered the chipotle barbecue burger along with a glass of Pinot Noir. (Julie Wilson had insisted I do so, saying, “It’s the best burger you’ll ever eat!”) Well, I’m not sure it was the best burger I’ve ever eaten, but it was close. The Royal Street chipotle burger is a choice of certified Angus Beef, turkey or garden burger (I chose beef, naturally) with maple bacon, sautéed onions, pepper Jack cheese, guacamole, homemade chipotle mayo and zippy barbecue sauce, all served with crunchy garlic and sea-salt shoestring fries.

Does anyone happen to have the number for the Betty Ford Clinic?