Do you ever wish that, instead of sitting down to eat in a single restaurant, you could compose a fantasy meal consisting of dishes—appetizers, entrées, desserts, etc.—from all your favorite establishments? I do. Of course, it would be nearly impossible to pull off, even with being from location to location. But, hey, a man can dream. This would be a Sophie's Choice situation where some of my favorite menu items wouldn't make the cut, but sadly there isn't room (even in a gourmand's fantasy) for all of those I'd like to include. Hard choices must be made, if only to avoid the fate of Monty Python's Mr. Creosote, who (spoiler alert) comes to an untimely end in The Meaning of Life when, following a hyper-gluttonous meal, a single "wafer-thin mint" prompts his gruesome demise. So here we go:

Since, in my mind, every awesome meal should begin with oysters, I'd head to Market Street Oyster Bar (48 W. Market St., SLC, 801-531-6044, ginc.com) for an assortment of bluepoint, Kusshi, Northwest and Kumamoto oysters on the half-shell and a glass of crisp white wine. Next—and not solely because my partner works there—I'd enjoy the pretty drive up Millcreek Canyon to Log Haven (6451 E. Millcreek Canyon Road, SLC, 801-272-8255, log-haven.com) for Chef Dave Jones' outstanding appetizer: minced sushi-grade tuna tartare with a crisp miso-sesame tuile, seaweed salad, crushed avocado and pickled shiitakes. Simultaneously sweet, spicy and tart, this tartare hits all the right notes.

For a salad course—and, this is why such a dining excursion is only possible in my mind—I'd motor to Park City for the hamachi Caesar salad at Firewood (306 Main, Park City, 435-252-9900, firewoodonmain.com). Caesar salad can be a ho-hum affair, but that's definitely not the case when creative Chef John Murcko is involved. Romaine ribs are topped with a heavenly dressing, with toasted pumpernickel crumbs (in the place of standard croutons) and shaved Parmigiano-Reggiano, and served with two pieces of smoked hamachi. Look very closely and you'll find nearly invisible pieces of salted egg yolk, onto the lettuce leaves, which impart more flavor and texture than if the yolks had merely been incorporated into the dressing, as is the tradition.

Of course, we'd want bread with our meal. For that, Table X (1457 E. 3350 South, SLC, 385-528-3712, tablexrestaurant.com) marks the spot. I don't normally go gaga for bread, but the in-house baked sourdough here—served gratis with silky whipped butter—is other-worldly. The same is true of the at Stoneground Kitchen (249 E. 400 South, SLC, 801-364-1368, stonegroundslc.com). Essentially, it is baked, slightly charred pizza dough that puffs up like Indian poori or a Mexican sopaipilla. A server delivers the steaming to your table and deftly deflates and slices it. It's lightly sprinkled with Adriatic Sea salt, dried and garlic oil, and served simply with an irresistible sauce for dipping. Yes, bodacious bread. 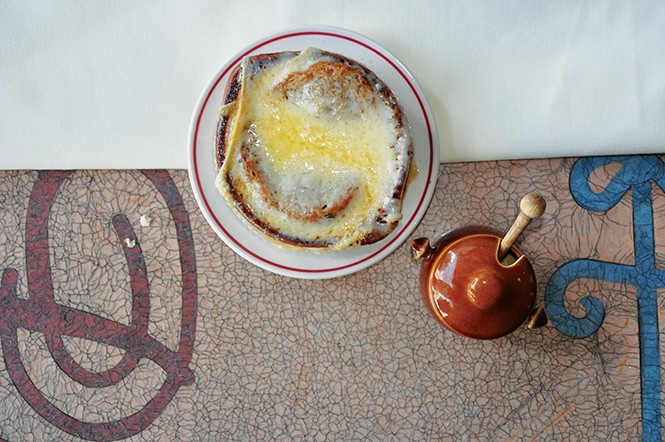 Since this is my fantasy, let's throw in both soup and pasta courses. Let's see ... soup. It's got to be The Paris' (1500 S. 1500 East, SLC, 801-486-5585, theparis.net) gratinée à . I'd belly up to the zinc bar and ask Justin for a wine or cocktail recommendation first—what do you drink with French onion soup? This is something that so many restaurants get wrong, but with Parisian-born Emmanuel Levarek in the kitchen, you can count on your soup's onions to be perfectly caramelized and the Gruyère to have a slightly toasted crust and crunch—a beautiful bowl of soup, indeed. For a pasta course, it's going to be tough to top the ravioli at Fireside on Regent (126 S. Regent St., SLC, 801-359-4011, firesideonregent.com). If you tend to think of ravioli as overcooked, cheese-stuffed pasta sheets smothered in tomato sauce with grated cheese, think again. Although the house-extruded iteration at Michael Richey's restaurant is hearty in texture, it's delicate in taste. The perfect pasta envelopes braised chicken-thigh meat and ricotta, and the are served in a light consommé and topped with fresh minced herbs—chervil and chives. This ravioli is rad. 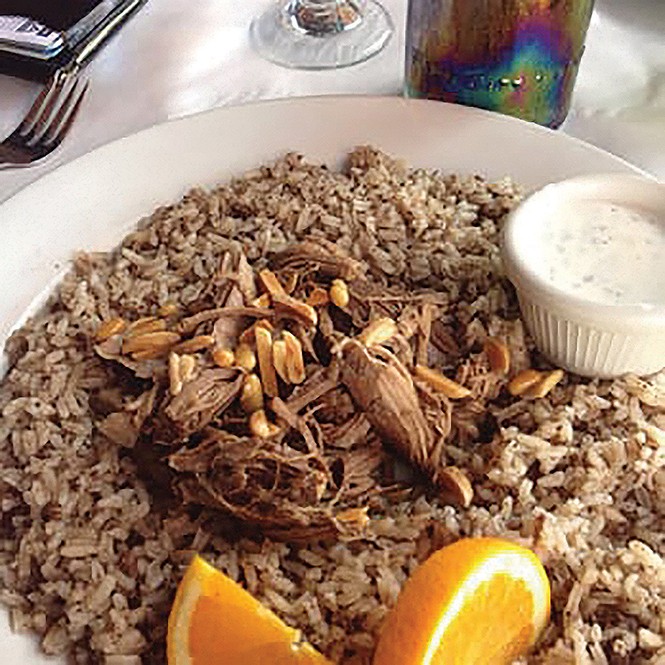 Choosing a single meat course is challenging. But even given all the excellent steaks, chops, filets, shanks and such out there, one of my very favorites is a dish featuring lamb, but it's not hogging the whole plate. I'm thinking of the Lebanese-style lamb and rice at Mazza (1515 S. 1500 East, SLC, 801-484-9259; 912 E. 900 South, SLC, 801-521-4572, mazzacafe.com). It's such a simple dish, yet so satisfying: Lean lamb is cooked until tantalizingly tender with Middle Eastern spices such as cinnamon and allspice, served with rice and garnished with toasted almonds and pine nuts. Alongside is homemade cucumber-yogurt sauce which adds clean, aromatic flavors. Go all out and enjoy it paired with Massaya Terrasses de Baalbeck Silver Selection wine—made with Châteauneuf-du-Pape type varietals—from the Bekaa Valley in Lebanon.

Finally, it's back to Park City for one of the best dessert selections not just in Utah but anywhere on the planet. Tupelo (508 Main, Park City, 435-615-7700, tupeloparkcity.com) Pastry Chef Shirley Butler originally hails from England, so it's not surprising that her sticky toffee pudding should be such a hit with customers, as are her addictive buttermilk biscuits with Tupelo honey butter. One of the U.K.'s great gifts to humankind, sticky toffee pudding, is delicious in its own right, and this version is second-to-none—so moist and luxurious with silky toffee-pecan sauce. But Butler kicks hers up a few notches with the addition of unforgettable Earl Grey bitters ice cream. It's simply outstanding.

Now, maybe I have room for just one wafer-thin mint ...