You work hard for your money, so you better treat yourself right. Go ahead and buy your deodorant and off-brand window cleaner at the dollar store, but when it comes to food, you deserve better than Costco hotdogs and Top Ramen. With some insight to the best restaurants off the beaten path, you can eat like royalty on a pauper's budget. Whether you're broke or just thrifty, here's a list of delicious dining options that won't break the bank.

Breakfast at Left Fork Grill
Start your weekday with a hearty breakfast for less scratch than a latte from Starbucks. For only $4.49, diners can choose from two options: two eggs, potatoes and toast with housemade jam; or two eggs, one pancake and bacon or housemade sausage. Splurge and order the freshly pressed orange juice served in a chilled glass. You deserve it. Left Fork Grill is something special, a classic diner owned by a properly trained chef, Jeff Masten, who purchased it in 2006 and made it a destination for those who are nostalgic for diner food but crave quality.
68 W. 3900 South, 801-266-4322, leftforkgrill.ipower.com

Second breakfast at Fresh Donut
There's no excuse to stick to your diet at Fresh Donut and Deli. Seize the day with these from-scratch, melt-in-your-mouth old-fashioned donuts for under $1 each. Choose from classics like apple fritters, glazed, maple bars and more. Score a dozen for less than a 10-spot and be the office hero, or treat yourself to one or two as a mid-morning snack. Locals in the know consider these doughnuts the best in Salt Lake City, which explains why this family-owned-and-operated bakery gets more popular (and busier) every day.
2699 S. State, 801-467-8322

Lunch at Nico's
It's hard to beat $5.99 for lunch, especially when it's this delicious and filling. Nico's, a small family-run restaurant, serves authentic Mexican food with friendly customer service. Each weekday brings a different lunch special served with your choice of meat, (or sans meat if you prefer) rice and beans and a free soda. If you dine in, you can enjoy a complimentary serving of freshly made salsa and warm, crispy tortilla chips. On Monday, dig into two tacos. Tuesday's special is one taco and one enchilada. Wednesday offers one chile (possibly the best in the city) and an enchilada. An enchilada and tamal are Thursday's special. Fridays, you can taste a huarache—masa covered with your choice of meat—and other tasty toppings. Craving Wednesday's special on a Thursday? No problem, just pay a buck more.
1458 W. North Temple, 801-364-0363 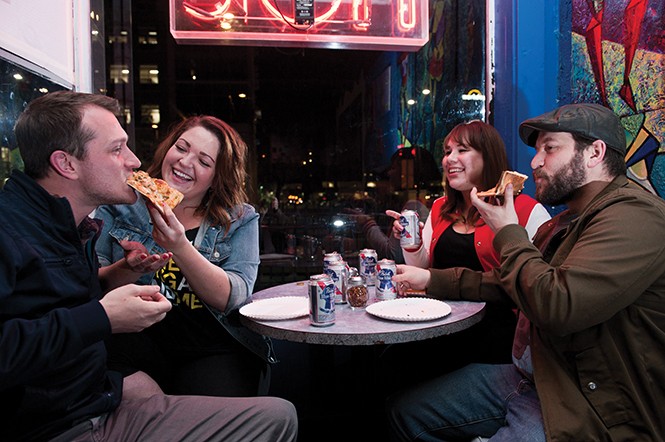 Dinner at Pie Hole
The Pie Hole is known for late nights and cheap slices. Graffiti covers the walls, mountains of empty PBR cans are stacked high, and the arcade and pinball machines are ready to be played. It's the destination after the bars close, but it's also a great place to indulge in a few slices of New York-style pizza on your lunch break. Prices range from $2.09 for a slice of cheese pizza, to $2.64 for the slice of the day. Wash it all down with a Pabst, sold by the can for only $1. Try the popular potato-bacon pie or the vegan slice of the day—they're all good. Hit them up Monday for lunch where you can score two slices and a fountain drink for $5.
344 S. State, 801-359-4653, pieholeutah.com