Hotels are places where people sleep, take showers, then leave. It's one of the most basic services a business could offer. What hotels provide on top of that, however, determines their true savvy. It starts with free soaps and shampoos—customary at even the dingiest of chain motels—and progresses to continental breakfasts, pools, minibars and other such comforts. Suddenly, guests feel so pampered, they start to wish they never had to leave.

Then there are those hotels so desperate to entrap their guests that they add restaurants. Do not be fooled: Nine times out of 10, a hotel restaurant is a fake restaurant. It's an amenity, an illusion of luxury. A veritable sheep in wolf's clothing.

But just as hotels con their guests into paying for counterfeit fine dining, I have conned City Weekly into paying me to patronize and review these afterthought eateries. To be sure, I was sincere in my effort to critique bad hotel food—despite being a vegetarian with the dietary preferences of a 12-year-old. But it was rarely the food that grabbed my attention.

JB's Restaurant
JB's, attached to the Plaza Hotel in downtown Salt Lake City, is across the street from Temple Square. When I dined there on the Saturday of LDS spring conference weekend, I felt underdressed in my heather-gray hoodie.

The establishment is well kept, but it looks old. The décor shares the aesthetic vision my mom had for her living room in 1992. Emily was my server. A sleeve of tattoos was partially concealed under her long-sleeve T-shirt. I ordered the Cajun shrimp pasta without shrimp, and Emily didn't flinch. She smiled, fetched my Diet Coke, and proceeded to explain the local transit system to the elderly South African couple seated in a nearby booth. She even grabbed transit maps from the hotel lobby and gave them directions to the Amtrak station.

The pasta was about as Cajun-spicy as a caucasian man from Utah would pride himself in handling. I made a point of finishing the large-portioned meal, which was a misguided decision I later regretted.

JB's emptied out quickly as the evening conference talks neared. As I left, the waitstaff was regrouping from the conference rush. I overheard a server say, "I think they like to go out for milkshakes afterward."

Sunny's Bistro
Sunny's Bistro is tucked into the Airport Inn Hotel near the western dead-end of North Temple. Drive any farther, and you might end up on an airport runway.

On a sensory level, the dining space is crowded by the adjacent indoor pool's chlorine fumes and cacophony of giggly splashes. Everything else feels more like a typical American-style Chinese restaurant: tile floors, unpretentious furniture, kitschy decorations.

Jennifer, my and the restaurant's proprietor, seated me. I told her I admired the bistro's logo, a cartoon girl in a red kimono. "Isn't it cute? My sister designed it on her Mac," she said. Sunny, it turns out, is their mother's name.

I ordered kung pao tofu from Jennifer, who asked if I was vegetarian. She offered a vegetarian egg roll in place of the customary pre-meal soup, as it had beef stock—a courtesy rarely extended to me at restaurants.

I got a fortune cookie with my check. It read, "An unexpected visitor will bring you good blessings." Thus far, the prophecy has failed to actualize. 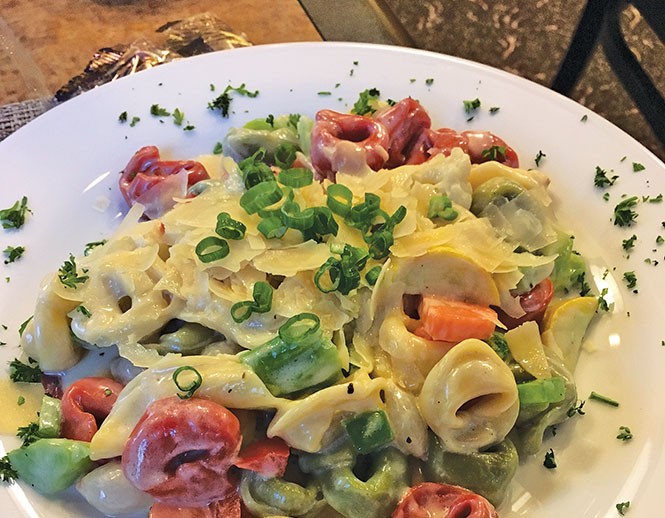 The Garden Grill
The Hilton Garden Inn's restaurant inconspicuously blends into the hotel's lobby on the first floor. It has a dining area conjoined with a bar, where a TV showing the NCAA basketball championship game drew traveling businessmen like moths to a porchlight. The scene felt a bit like a new-money millionaire's mancave get-together.

Alec served me at my table in addition to manning the bar. He looked like the rugged love interest from a made-for-TV movie on the Hallmark Channel. For a brief Alec seemed as transfixed by the game as the bar's patrons, and I wondered if he had forgotten about me. Why, Alec? I recalled my newfound role as a restaurant critic, and I mused on the idea of writing a scathing review. I could pen such a lashing that the Hilton Garden Inn would shudder at every inference of my name. Oh, the power I now arbitrarily wield without any justifiable qualification!

Alec, it turned out, deserved no such treatment. He cheerily served my tri-colored veggie tortellini, which I inexplicably paired with a Michelob Ultra.

Oak Wood Fire Kitchen
The Peery Hotel, rumored to be haunted, has been a downtown Salt Lake City mainstay for over a century, but I suspect it was only recently when they decided to serve wood-oven pizzas. That's the featured dish on the menu of the Peery's street-level restaurant and bar, which looks anything but antiquated on the inside. The dining room has four gigantic TVs all playing different sports channels. A faux fireplace, framed by stacks of real firewood, takes up most of the far wall.

I had a tag-team of servers: Jaxon and Jill. I'll be honest: I couldn't get over the novelty of being served by a Jack-and-Jill duo. There I sat, munching on a four-cheese white pizza watching the rebroadcast of a collegiate softball game, and all I could think about was, "Jack and Jill! What a coincidence!" My powers of observation, admittedly, were compromised. Apparitions could have been floating about the room, knocking over salt-and-pepper shakers, and I would've been none the wiser.

H Bar
The two employees at the front desk of the Hyatt House looked embarrassed when I entered the lobby. Some emotional trauma had affected one of them, who was crying. The other was consoling her when they both looked up at me. The crying employee turned and walked into a back room, while the consoling one—herself teary-eyed—swallowed hard and said, "Hi there! What can I do for you?"

"Alone in the lobby of a hotel in Sandy that you're not even staying at? Sure, weirdo," I assumed she thought to herself.

I ordered a pesto-and-veggie grilled-cheese sandwich with tomato bisque soup, which was served to me by the chef herself. As I dined, the crying staffer slowly pulled herself together at the bar. The entire time, I mentally speculated at what might have happened to her. Did someone close pass away? Did she lose a pregnancy? I wanted to offer some token of , but as the solitary screwball enjoying a grilled cheese dinner in the midst of her personal hour of anguish, I didn't feel well-positioned to inject my condolences. In this fifth visit, I finally felt like an imposter: a schlubby writer wolf in a sheepish food critic's clothing. I left a 100-percent tip and didn't look back.

My newly minted food-critic recommendation: Try the grilled cheese at the Hyatt House H Bar if you're ever in Sandy.