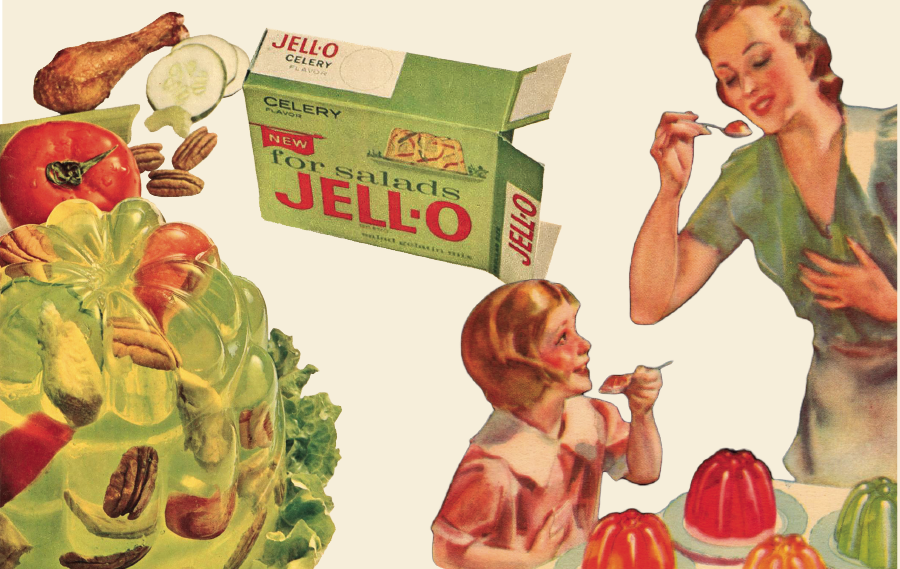 Molded and Set in The Beehive State
Inside Utah's love of Jell-O.
By Carolyn Campbell

U.S. Sen. Mike Lee, R-Utah, serves Jell-O on Wednesdays. He's given more than 9,000 cups of Jell-O to visitors at his Washington, D.C., office since he began representing the state in 2011. "Everyone is welcome to enjoy the Jell-O event whenever the Senate is in session," Lee's communications director, Conn Carroll, says. "We do not deviate from the printed recipe on the Jell-O box, but we do offer whipped cream as a topping."

On Tuesday afternoons, before he leaves to go home, Bradley Beck, Lee's staff assistant, prepares five-ounce plastic cups of green Jell-O and leaves them to set in Lee's office refrigerator. He discovered—as many Utah salad makers have learned—that making Jell-O is more complex than the package instructions claim. "If you mess up any of the four steps, it all breaks down. The first time I tried to make it, the Jell-O didn't set. That was embarrassing," he says. "I made four batches after that, to be sure it would work. Now I have it down to a science. But I still need to make sure there are no bubbles." True to form, the Jell-O is always green, except on special occasions. "It's red, white and blue on the Fourth of July, and red and green at Christmas," Beck points out. He also sometimes prepares the treat for high school visitors in their school colors.

Potential attendees can call ahead to make a reservation to attend the Wednesday afternoon Jell-O event, or they can just show up at 3 p.m. "It's like an open house," Beck says. Adds Carroll, "We usually have somewhere between five and 50 visitors per week, plus we make large batches for special occasions like when high school groups come to visit or the Salt Lake City Chamber of Commerce comes to town." He explains that while some other senators host coffee meetings for constituents, because Lee doesn't drink coffee, he originated the idea of serving Jell-O. "It's a way for Utahns to taste a little bit of Utah while they are here visiting," he adds. Carroll says Lee loves to tell the story of how the Utah Legislature declared Jell-O to be the official state snack back in 2001. In the declaration, it says Jell-O brand gelatin was introduced to the country in 1897, just one year after the Beehive was admitted to the Union as the 45th state. New York construction worker and entrepreneur Pearl Wait originated the gelatin creation. His wife named it Jell-O. The first flavors were strawberry, raspberry, orange and lemon. "Jell-O was a food wonder of the scientific era," says Marsha Stornetta, a researcher who has studied the sticky stuff. "Gelatin, which had once taken several onerous hours over a stove, could be produced by simply dissolving powder in water."

Because three boxes cost just 25 cents in the 1930s, Jell-O helped the Depression-era housewife stretch her budget. Before it became a state symbol, lime Jell-O, introduced in 1930, was an instant favorite with cooks who recognized how well its flavor blended with additions ranging from leftover meat to tuna to garden vegetables and fresh fruit. Mormons seemed to follow that trend. In 1934, The Relief Society Magazine published its version of Fannie Farmer's famous Ginger Ale Salad—a cup of ginger ale added to gelatin and grapes, celery, apples and pineapple. The church-wide distribution of several Jell-O recipes in the magazine not only helped spread the Mormon preference for Jell-O throughout its stakes, but also reflected a national trend: In the 1930s, almost a third of the salad recipes in any cookbook were gelatin-based, according to Carolyn Wyman, author of Jell-O, a Biography.

The Midwest was once considered the highest-consuming Jell-O area in the nation. But, in the early 1990s, Salt Lake City residents bought the most Jell-O nationwide—a total of four boxes per year per person, about four times as much as the average American. "Local food experts attributed Jell-O's popularity to the city's extensive Mormon population with their large families and low alcohol consumption, and compensating high sugar intake," Wyman says.

In 1999, Kraft Foods, owners of the Jell-O brand, announced that Des Moines, Iowa, was now the highest-consuming Jell-O population. "We don't like to talk about that," Beck says. Utahns then rallied to take back the title. The Salt Lake Tribune's editorial cartoonist Pat Bagley penned a cartoon persuading Utahns to purchase more Jell-O. Bambara chef Scott Blackerby hosted a recipe contest, which yielded entries such as "Pool Party," "Erupting Volcano" and "Seagull Splat." Utah Holiday Magazine hosted the Last Annual Jell-O festival, where one sculpture depicted a Utah basement—an artfully arranged pile of diaper boxes and Jell-O packages. "It was astonishing what people could make from Jell-O. There was a Delicate Arch made out of orange Jell-O," recalls Sharon Swenson, widow of Utah Holiday editor Paul Swenson. "It was a way to unleash creativity." Throughout 2000, BYU students campaigned at festivals and fairs across the state, in an effort to make Utah's love of Jell-O known far and wide.

A year later, when Utah won back the title by narrowly surpassing Iowa in annual Jell-O consumption, the Utah Legislature designated Jell-O as the state snack. They named Bill Cosby, Jell-O's official spokesman, as an honorary Utah citizen. He praised Utah for once again landing the title of "Jell-O capital of the world." The 2002 Olympic pin that features a bowl of green Jell-O has become a valuable collector's item. Last month, one such pin was offered for sale on eBay for $90.

Lynne Galia, corporate affairs representative for Kraft-Heinz, says that while she's aware of Jell-O competitions in the past, the company no longer tracks sales totals by state, so there isn't an updated winner. Still, Beck adds that as far as he knows, Utah is still the highest per capita consumer.

"Frankly, for all its talk, I think Utah likes the idea of Jell-O more than it likes eating it," researcher Stornetta says. "Jell-O is a very Midwestern concept. I found many, many states and religious traditions that thought they were unique in their Jell-O traditions.She feels that the ubiquitous Jell-O salad at LDS church gatherings has long been replaced by tossed salads. "There is always a tossed salad. Doesn't require much thought and can't offend anyone," she says, adding, "and yet, the funeral potatoes—which also occur throughout middle America—persist in Utah."

Stornetta admits that her own Mormon childhood included a lot of Jell-O. "It was my job to make the Jell-O salad every Sunday morning. I dipped a quarter cup into the big commercial size boxes of Jell-O my mother had, added the water and some fruit, and put it in the fridge to set," she recalls. "We enjoyed our salad by the time we returned home from Sunday School for Sunday dinner." She also remembers recipes for special occasions, a strawberry Jell-O with a sour cream layer, and an orange one with whipped cream frosting. "But to be honest, we rarely ate lime Jell-O. The first time she had lime Jell-O was during her freshman year at BYU. "My new roommate had prepared a recipe with cottage cheese and pineapple. I choked it down." And it was not the worst Jell-O recipe Stornetta ever saw. While some say that popularity of green Jell-O in Utah stems from Utahns' propensity to add shredded carrots to the green gelatin, in years past, adding other main dish foods to Jell-O was actually common. There were numerous main-course Jell-O recipes in the 1960s. "I seem to recall one with hot dogs," Stornetta says. "I am not sure who ever thought those recipes were a good idea, much less who ever ate them."

Mouth watering yet? Here are some prized Jell-O recipes from a few Utah notables:

Julie Ulrich, banquet manager (retired), The Lion House,
SLC's Pear Whip Salad
1 large Black Cherry Jell-O
1 large can pears-reserve liquid
1 cup whipped cream
Using the liquid from the pears and enough water to make 2 cups, dissolve Jell-O and set it. Mash the pears.
Whip the cream (do not sweeten).
When the Jell-O is set, use two forks and shred it.
Stir in the pears and then fold in the whipped cream. Refrigerate until ready to serve.

Gail Miller, owner, Utah Jazz
Jazzy Jell-O Salad
1 regular container of Cool Whip
1 container 16-ounce cottage cheese
1 can of crushed pineapple (drained)
1 6-ounce package of lime Jell-O (can also use pistachio pudding)
Mix all of this together and then set in the fridge for 30 minutes to an hour. Enjoy!