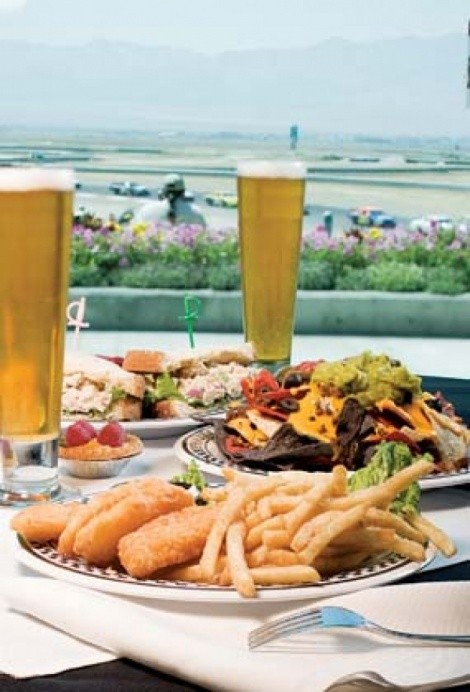 I suppose it was bound to happen sooner or later. But until last week, I’d never been asked to don a firesuit to review a restaurant. I mean, not even in Hawaii, where fire pits and Tiki torches are commonplace. But then, I don’t normally ride a 650 horsepower, 3500 pound, 350 cubic inch V8 NASCAR race rocket to the buffet, either.

“You have no idea how much fun you’re going to have,” said my man at Miller Motorsports Park in Tooele. John Gardner is the media manager there, and when I contacted him to inquire about food venues at the park, things evolved rapidly. Before I knew it, I was being fitted for a helmet and firesuit. Fun? Normally, my idea of fun doesn’t involve helmets or firesuits. But he was right; before the day was done, I was grinning ear to ear.

OK, confession: I am a motorsports fiend. It’s a character flaw I inherited from my dad, who took me to Indianapolis Motor Speedway as a kid and watched NASCAR races on Sundays. Indy racing, NASCAR, Formula 1, Grand-AM, dragsters—it doesn’t matter: If it goes fast, I love it. I have the need for speed. And, if like me, you think that speed thrills, well, you need to haul buns and get your tukus out to Miller Motorsports Park. Because you’re gonna love it.

I know a fair amount about racing. And I know about one-tenth of a percent of what John Gardner knows. He’s been working in and around the world of auto racing for more than three decades, most recently based at Charlotte Motor Speedway with SpeedVision, before being seduced by Larry Miller to join his group here in Utah. Over lunch at the Motorsports Park’s Clubhouse bar, he tells me that Miller himself is a serious motorhead. Auto racing, not NBA basketball, is what really gets him going. As I nibble on very tasty filets of beer-batted Alaskan center-cut halibut ($12), he tells me that Miller, who’s currently battling back from a heart attack, would love to be able to be at the NASCAR Camping World Series race that weekend. While munching on deliciously crisp lightly battered French fries I learn that Miller began drag racing as a teenager and never has lost his lust for speed.

In fact, Miller is such a speed freak that he’s put $100 million of private money into the Miller Motorsports Park—a facility, by the way, that is world-class in every aspect. “People come from all over the world to race and watch races here,” says Gardner. “It’s the locals who don’t seem to know about it,” he laments.

Too bad, because if they did, they’d also discover the best cheeseburger ($8.25) between Salt Lake City and the Nevada border. The Clubhouse’s french dip sandwich ($8.50), stuffed with thin-sliced beast and Swiss cheese and served with scrumptious au jus and horseradish cream sauce is also killer. I had mine with a penne pasta side salad peppered with shredded cheese, minced red onion and cucumber. A cold glass of Squatters’ Chasing Tail beer ($4.50) is the perfect french dip accompaniment.

“Are you ready for your ride?” asks Gardner as we wrap up lunch. He’s arranged for me to take a ride around the Motorsports Park course—North America’s longest, by the way—with Jason Bowles from Ontario, Calif., winner of last year’s NASCAR race here. It occurs to me as I try to squeeze in through the window (these cars don’t have doors) that it might have been a good idea to eat a lighter lunch. “Wanna go fast?” the mischievous Bowles asks as he fires up the car with a deafening rumble. I give him the thumbs up, and before you can say “Mario Andretti” my helmeted head is pasted against the headrest. In a matter of seconds, Bowles has gone through the gears, and we’re going well over 100 mph—top speed on these cars is around 200. The first high-speed left slams my head to the right and the first right pins my skull to the left. Now I see why these guys wear helmets; they take a beating in these cars even when they don’t crash.

What do the drivers eat? No much, apparently. They tend to be young, thin, and favor expensive shades and designer bellbottom jeans when they’re not in racing gear. At the Miller Motorsports Park’s trackside cafes, named for some of the world’s renown race courses—Monza, Ace, Le Mans & Monaco—you can pig out on Colosimo’s sausages ($5.25), barbecued beef brisket ($6) a respectable Philly cheesesteak ($6.25), and wash it down with a cold Budweiser ($6.25). But I don’t get the impression any of these drivers have ever done that. I suspect they live on energy bars.

Spending a day exploring Miller’s playground requires a lot of energy. After all, it’s four times the size of Disneyland. So consider carbo-loading at a Chile Verde stand, where you’ll find a spicy selection of tacos, nachos and California-style burritos. But be sure to bring along a drool bag, especially if you visit the Auto Museum & BBQ, where the ’cue and Larry Miller’s world-class collection of rare Shelby Cobras, Shelby Mustangs and other collectibles will have you salivating.

About that NASCAR ride I took? Well, you don’t have to be a restaurant critic to ride. Miller Motorsports Park offers rides to civilians, too. And if you decide you really enjoy speed, you can even enroll in one of the motorcycle or auto high-performance driving schools based there. And I can’t think of a better place to throw an office party or corporate get-together. I’m sort of hoping that City Weekly will invest in one of those fancy hospitality suites at the track. Speed thrills.