Dining | Think Fast: A pair of quality “quickie” venues might have you rethinking fast food. 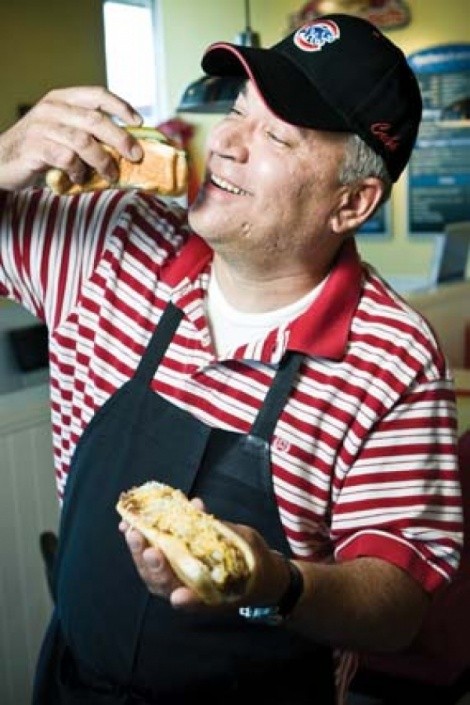 In a recent e-mail missive from one of my trusted foodie informants, I was called upon to “explain why Five Guys Burgers and Fries are taking over the world.” My man went on to report, “I trekked down to Midvale and the place was jammed, so I got an ordinary burger, mealy fries and a fountain drink for eight bucks.” Don’t quite know why I was supposed to explain the popularity of Five Guys—since I’d never even been there—but I guess it goes with the territory.

Well, now that I have been to Five Guys Burgers and Fries, I can weigh in on the topic. And when it comes to Five Guys, I have likes and dislikes. Regardless of my opinion, the rapidly growing Five Guys chain has garnered raves around the country in newspapers, magazines and Zagat. Maybe one of the things that both critics and customers like about Five Guys—I know I do—as that they keep things simple. When Five Guys says “Burgers and Fries,” they mean burgers and fries. Burgers and fries make up the entire menu, except for hot dogs and a grilled cheese or veggie sandwich, the latter of which my wife ordered. It consisted of a choice of veggies used for burger toppings (mushrooms, peppers, onions, tomatoes, etc.), all grilled and stuck between two buns. As my informant pointed out about Five Guys: “No pastrami, no gyro, no chicken gyro, no Mad Greek crispy fries, no milk shakes, no Levantine fry sauce …” But I consider this lack of options to be a good thing. The Five Guys know what they want to be: Burgermeisters.

The joint looks like the set of a White Stripes video: brightly lit and all red, white and chrome. The only other colors you’ll see are on green lettuce and yellow mustard. The lines are long no matter what time of day or night you show up, but the terrific piped-in music selection helps pass the time. When did you last hear Stevie Ray Vaughan, The Beatles, James Brown and Jimi Hendrix in a fast-food restaurant?

The standard burger ($4.39 or $4.89 w/cheese) is two 3.3-ounce patties piled atop one another, with a choice of some 15 free toppings and served on a standard baked bun. As my wife said, “These are great for people who like lots of toppings; otherwise you’re just paying five bucks for a burger.” True, but I found these hand-formed, irregular patties to be scrumptious. They actually tasted like meat—like what a burger you’d make from scratch at home might taste like, although cooked through a tad more thoroughly than I like. According to Five Guys, they use only fresh 80/20 ground beef that’s never frozen and serve it on fresh baked buns. They are very tasty.

I did not find the fries mealy. In fact, they’re the best fries I’ve had since Susie’s Main Street Café in Coalville closed. Five Guys uses skin-on Russet taters cooked in peanut oil. There’s a chalkboard in the front of the restaurant that tells customers where today’s potatoes came from (Rigby, Idaho, for example). The fries had a perfect texture and taste, and a single order is plenty for two to share. Oh yeah, here’s an oddity that’s also a nicety: Five Guys Burgers and Fries offers all the free peanuts you can eat, which is helpful as you wait … and wait … and wait for your “fast” food.

Just ’round the corner from Five Guys in Midvale’s Family Center is Johnniebeefs, purveyor of Chicago-style hot dogs. Note: This is not a chain. It’s a one-off, although it’s easy to see how Johnniebeefs could become a very successful franchise down the road.

Unlike at Five Guys, the choices here are nearly overwhelming. But you’ll have lots of time to weigh your tubesteak options while you wait in the frustratingly slow line to order. There are 13 hot dog varieties, plus another dozen or so burgers and sandwiches as well as a selection of salads, appetizers and desserts. But the real reason to visit Johnniebeefs is to get your lips around a Red Hot Chicago Dog. This is a high-quality, pure beef, never-frozen brand of hot dog made, obviously, in Chicago. It’s the Gucci of hot dogs.

The cozy Johnniebeefs space is spotless, with black and white checkerboard floors, Dijon-colored walls and red and yellow leather booths. Chicago sports fans will love the photos of Wrigley Field, the White Sox and Michael Jordan’s “The Shot,” which buried the Jazz in the 1998 NBA finals. John, Johnniebeefs’ owner, seems to know just about everyone’s name; clearly, he gets a lot of repeat customers. The downside is that many of those customers like to linger and chat with John, thereby creating gridlock since John is the only order-taker in the place.

Fenway Franks notwithstanding, I don’t know that I’ve ever tasted a better hot dog, although I tend to favor Johnniebeefs simple Utah Dog (straight, with mustard) over more complex options like the Chicago Dog (mustard, onions, green relish, cucumbers, tomatoes, peppers, pickles and celery salt). With so many toppings, you miss out on the actual flavor of the lean Red Hot Chicago Dog. The dogs come served on steamed poppy-seed buns, which unfortunately can get a bit soggy sometimes. My New Yorkie Dog had about a quarter-cup of yellow mustard on it, which soaked right through the mushy bun. But I wouldn’t recommend the New Yorkie anyway, since the sauerkraut it came with was cold. Not room temperature—cold. Like I said, stick with the basics; less is more. The Polish sausages, bratwurst, Italian sausage and Fire Dogs at Johnniebeefs are also worth the wait.