Do men really think about sex every six seconds? 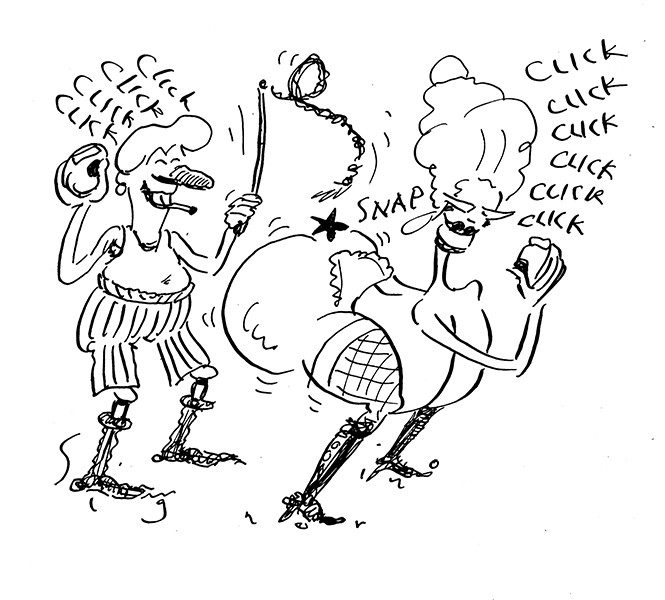 I was wondering if you could settle a dispute I'm having with a charming young lady. She insists that men, on average, think about sex every six seconds. Thinking about sex 10 times every minute just seems a bit much to me. Dubious, no? —Luke Robertson, Massachusetts

Six seconds, seven, 11—some version of the "Men think about sex every X seconds" claim has been kicking around forever. The intended takeaway, clearly, is that human males are just naturally hornier than the females, but nobody knows where the alleged stat came from, and anyway, all evidence suggests it's bunk. The most recent wisdom we have on this subject comes via a 2012 paper from Ohio State University, where researchers equipped 163 male and female students with golf counters—you know, the kind where you click a button to advance the number display—and asked them to tally how often they thought about nooky. (These devices are also known as "stroke counters," a point that for some unimaginable reason the authors left out of their paper.) The most prolific sex-thinker in the group, a male subject, recorded an average of 388 amorous musings a day over the course of a week. Assuming this guy ever managed to get any sleep, that's something like one sex thought every 2.5 minutes, and he's at the very top of the reported range. I think we can call this dispute settled.

How often did everyone else think about sex, though? First let's slow down a little and consider some conceptual and methodological factors here. For starters, what do we mean by men and women? The OSU researchers reported that all in all (i.e., including control groups; see below) their subjects included 43 female and 120 male students, 96.1 percent of whom self-identified as heterosexual. Were any of them transgender? The authors don't say. But you could argue that the very existence of people who identify as something other than the gender they were assigned at birth would seem to complicate any firm binary pronouncements about what "men" and "women" think about.

Then there's the issue of how you get people to monitor their own thoughts without inherently skewing the numbers. On this topic, I refer you to Fyodor Dostoevsky, who wrote, "Try to pose for yourself this task: not to think of a polar bear, and you will see that the cursed thing will come to mind every minute." This is actually a methodological problem in psychology, named after Dostoevsky's challenge—the "white bear problem," also called "ironic process theory." Strictly, the concept applies to thoughts you're trying to avoid, but the OSU authors acknowledged that simply toting a golf counter around might have effectively reminded the subjects to think about sex more often than they otherwise might.

In short, I suspect the actual answer, to the extent there is one, might be the least interesting part of the how-often question. In the interest of keeping the customer satisfied, though, here's what the study found: The women reported rates of 1-140 sexual thoughts per day, with an average of 18.6. The men, meanwhile, showed both higher numbers and greater variability—their rates ranged between 1 and (as mentioned) 388 thoughts a day, with an average of 34.2. For men, that's a sex thought every waking half hour, roughly, compared to once every 55 minutes for women.

We might note that 163 college kids with clickers isn't many—a far smaller sample than (e.g.) a survey conducted in 1973 where 4,420 people were asked whether they'd thought about sex in the previous five minutes. (Results? For respondents age 25 and under, 52 percent of men and 29 percent of women answered in the affirmative.) Rather than rely on subjects' notoriously unreliable memory, though, OSU researchers thought real-time recording might improve accuracy. They also had control groups count their thoughts about food and sleep, to make sure men weren't just generally more in touch with their various physical needs.

Anyway, their findings tracked with earlier work insofar as it identified a difference in the regularity with which men and women think about getting horizontal. What might account for that? There's the possibility, for instance, of research subjects complying with cultural stereotypes about sex-thought-frequency, or that men might simply feel more comfortable than women in discussing sexual cogitation—an idea that won't sound crazy to any woman who's ever walked past a construction site. (But again, that's the apparent point of the every-X-seconds claim under review: providing scientific-sounding cover for guys' gross behavior.) However, in the control groups counting food and sleep thoughts, the men scored higher, too. The researchers suggested these recurring splits could indicate men and women are conceptualizing thoughts differently: "Perhaps men have a lower threshold for the labeling or recognition of cognition." Yep, we're down to thinking about how people think about thoughts, which brings to mind someone who once questioned what the definition of "is" is. Bill Clinton, man—now there's a guy who could skew a study like this.