“If a man does not keep pace with his companions, perhaps it is because he hears a different drummer.” —From Henry David Thoreau’s Walden

Joe Southers abandoned cookie-cutter suburban living for a cozy, cave-like RV in Salt Lake City. One big hitch is that when something goes wrong with Southers’ home, he might just have to drive it somewhere to get it fixed.

Former Utah legislator Christine Johnson gave up a hip loft scene in Columbia, S.C. for a socially remote houseboat on a quiet lake near the capital. “Cool, but crazy,” say some of Johnson’s critics.

Either way, they’ve both done some serious downsizing. You might call them minimalists. But they’re right where they want to be—living with less when, in fact, they could have much more.

Why?
There are no trends or polls that support a widespread socioeconomic shift in thinking that has masses of people ditching the American dream just because they feel like it. These kinds of so-called crazies, these minimalists, just seem to pop up here and there.

Southers gave a bit of attitude when asked if he made the switch because, perhaps, he needed to make do with less in order to contemplate life’s big questions: Where did we come from? Why are we here? What happens after we die?

“I really don’t give a shit,” the reinvented Joe Southers replied over a few beers inside his home on wheels.

Got it.
And he doesn’t care much anymore about the finely edged, manicured lawns in Bountiful where his ex-wife, her new husband and their combined five children live. He’s left behind the many uptight suburbanites who so love their landscaping that their elected city sages decided in 2010 to hire a sharpshooter to, upon a homeowner’s request, blow away any pesky deer that poop on their grass or eat their precious flowers and shrubs.

They are aspects of Southers’ and Johnson’s new lives, ones that are tempting to compare with the likes of Henry David Thoreau, whose RV park or houseboat was a cabin at Walden Pond.

Southers now lives in Salt Lake City in a home smaller than a lot of people’s bedrooms. Talk about scaled down. Southers, 35, has turned his back on consumer-obsessed suburbia, where debt rules and the kind of “stuff” you have actually matters to some people. Now he’s living in a trailer on wheels.

Is it a “box of sadness,” a genius move on his part or something in between?

Johnson’s own daughter, Olivia, equates her mother’s switch to something a poor person would do out of necessity, not something a person would do because of an actual desire to sell or give most everything away to live on what amounts to a homemade modified pontoon boat.

“She’s only 19,” Johnson says about her daughter’s opinion.

When Johnson—the former Salt Lake City Democrat state representative who served two terms before stepping down in 2010—moved back to her native South Carolina for the job of South Carolina Equality executive director, she started out living with Mom and then moved into a noisy loft community. It was too noisy.

So, instead of a rowboat, she bought a houseboat. She was ready for a change, to own her “home” outright and to begin minimizing her impact in the world. In February 2010, Johnson haggled down the $4,500 asking price for the 12-by-36 houseboat to $2,250, which, with a $300 per month slip fee on Lake Murray, gets her back to roots.

“I grew up blocks away from waterways in Charleston,” Johnson says. “I think it’s one thing I missed most—water.” Water is the backdrop for sunsets or coffee in the morning on the deck of the boat she named My Mynrva. You can catch glimpses of Johnson’s life on Lake Murray at MyMynrva.blogspot.com.

One thing that stands out in photos of the boat is how little space there is for stuff. As late comedian George Carlin would have put it, there’s only room for the “stuff” she really, really needs. “It has curbed my desire to consume in the most unbelievable way,” she says. “The days of going to Costco to buy 48 rolls of toilet paper are over.” All of that stuff she used to own just doesn’t mean as much anymore.

For example, her energy consumption is down almost 70 percent, from about $90 per month to about $30. The soap she uses to wash dishes or her hair is biodegradable, ending up in the lake. “I’m more conscientious about spending and being a consumer and my own footprint,” she says.

She’s training geese to visit her for food when she rings a bell, which also happens to attract a particular turtle she named George, who has developed an affinity for cheddar cheese.

One tradeoff is that she gets a little motion sick on land if she’s been on the boat for days at a time. 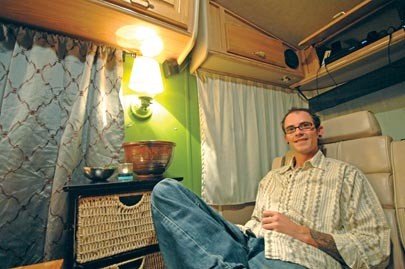 Different Order of Mobililty
Johnson and Southers are kindred spirits in that way.

The meaning in Southers’ life can be found on the road as a fuel-truck driver, in the people he meets, in the tattoos on his arms and in the books he reads. He devours works by Hemingway, Faulkner, Steinbeck, Joyce, Emerson and Thoreau, whom Southers, in some ways, seems to be emulating these days, only with an RV-park kind of twist to the ideas and notions Henry David Thoreau worked out at Walden Pond (on land owned by Emerson).

More than 150 years ago, Thoreau said in Walden, “A man is rich in proportion to the number of things which he can afford to let alone.” Southers just might be a rich man. First of all, he’s got a lot more time to himself these days. Time to think.

“You start with nothing and you start accumulating,” Southers says inside his home. “After I accumulated so much, I realized I was better off before.” It all made his life more complicated, after he felt like the stuff started owning him. Like a gas- sucking lawn mower, a needy old water heater, an obnoxious weed eater and things that generally just fill a house.

He’s got a few techy gadgets around, but about the only tangible things he collects are rocks (which he labels and keeps in a bowl after memorable hikes) and books (although a Kindle has changed that).