Like too many biopics, Judy provides a performance showcase and little more. 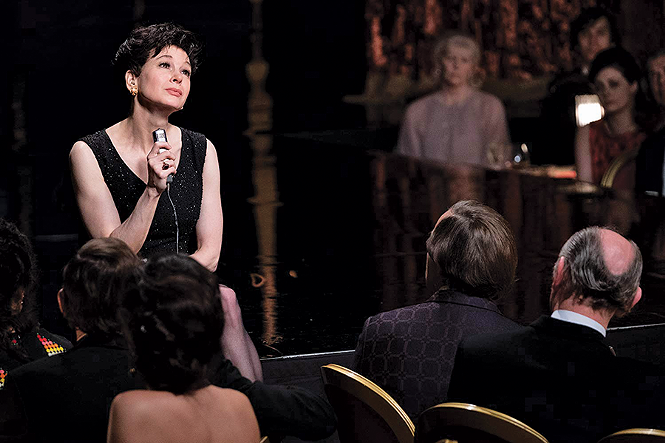 Considering how good America is at producing icons worthy of biopic treatment, it's ironic how bad we are at making biopics. The usual formula is for someone to give a career-best performance as some tortured artist or other, but for the movie itself to be a by-the-numbers recitation of events from the person's history. This formula is effective—Bohemian Rhapsody was a smash and won four Oscars—but it sure is dispiriting, especially for fans of the icon in question who were hoping for a definitive biography.

Judy, starring Renée Zellweger as Ms. Garland during the last year of her life, is just this sort of biopic, and the disparity between the quality of her performance and the quality of the movie is particularly stark. Zellweger, who hasn't done much onscreen lately apart from the 2016 Bridget Jones sequel, doesn't need a comeback quite as badly as Garland did in 1969, but she swings for the fences, adopting a voice and mannerisms that recall Garland without being a straight-up impersonation so that she can make the character her own. The film is centered around Garland's five-week run of shows at London's Talk of the Town cabaret, and the scenes of Zellweger onstage belting out Garland's signature tunes are enough to make you think someday there'll be a subpar biopic about Zellweger herself. (It will star Taylor Swift.)

When we meet her, Judy is still a legend, but a broke one. Her addiction to pills and alcohol have made her "unreliable and uninsurable" in the movie business, so she's grateful for the chance to work in London, even though it means being away from her teenage children, Lorna and Joey Luft, whose father, Sidney (Rufus Sewell), will use Judy's absence as pretense for seeking custody.

In London, Judy refuses to rehearse. On opening night, her handler, Rosalyn (Jessie Buckley), finds her a jittery, fidgety mess—whether from nerves or pills or both, it's not clear. Zellweger excels at showing Garland's extremes: a demanding, confident diva one minute, an anxious wreck the next. This ability to turn on a dime is used to marvelous effect when Rosalyn drags Judy to the night spot, sends her stumbling out onto the stage—and Judy pulls it together and knocks 'em dead, giving her audience no indication that she was only semi-coherent 10 minutes earlier. Who doesn't feel roused by a good old-fashioned "the show must go on" moment in a showbiz movie?

But then there's the rest of it. Nothing in Tom Edge's screenplay (adapted from Peter Quilter's play End of the Rainbow) is bad per se, and Rupert Goold (True Story) is competent enough as a director. There's just no oomph to it. The plot follows Judy's ups and downs, the victories and the setbacks, but the recounting of them is rote. Apart from Zellweger's performance, nothing about the film is noteworthy. Goold is clearly passionate about his subject, but passion is not the same thing as vision.

Actually, there is one other noteworthy element: Darci Shaw's work as Wizard of Oz-era Judy, seen in flashbacks establishing that Judy has been abused by the system ever since childhood. Shaw does a sharp impersonation of young Garland, but the gist of these scenes is always the same: A studio boss tells Judy to do something (or, more often, not to do something), and Judy defies him.

Michael Gambon is also on board as the promoter who books Judy for the London gig, an old friend and supporter who wants to help her but can only do so much. Faithful adherents to Judyism will recall that she got married to husband No. 5 around this time; that's Mickey Deans, played by Finn Wittrock as a dashing younger man who briefly helps Judy feel good about herself again.

As is so often the case, we're left with a terrific, endearing, pitch-perfect performance trapped in a movie that isn't nearly worthy of it. You can see how this was probably better as a stage play, with only three characters (Judy, Mickey and her pianist) and a limited focus. Expanding it to encompass more of Garland's life adds clutter, not value. Still, when it wins all those Oscars, at least we'll feel good about the one for Best Actress.