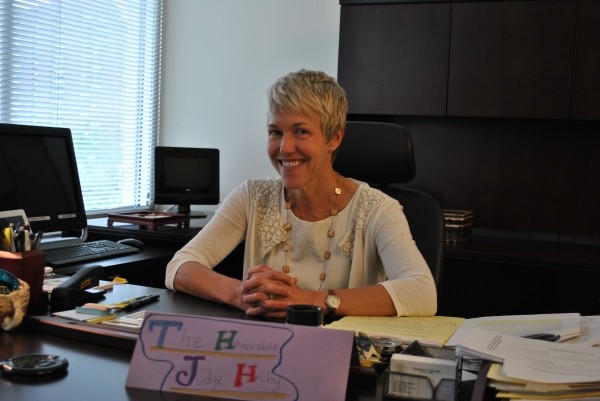 Divorce can leave children feeling guilty and uncertain about how to talk to their parents about the emotions they’re experiencing or ask the tough questions they might have. The Utah State Courts offer a free, voluntary divorce-education class for children ages 9 to 12 to help them understand that divorce is not their fault and learn how to deal with their emotions and communicate effectively with their parents about their needs. The kids-only class, which has been held since 2005, takes place in the courtroom of the Matheson Courthouse (450 S. State, UTCourts.gov) and is taught by a licensed mental-health professional. Judge Elizabeth Hruby-Mills, who oversees the Divorce Education for Children Subcommittee and plays a special guest role in the classes, talked to City Weekly about divorce education. The next classes are scheduled for Aug. 5, Aug. 24, Sept. 9 and Sept. 28; the program is also in the process of expanding to 2nd District and 4th District courts to reach children in the Ogden and Provo areas.

Divorce has become more commonplace and has lost some of its stigma; do kids still struggle with it?
The stigma is part of the issue, and I think the class helps with that. But it’s also the personal grieving of the kids, or they’re feeling guilty or responsible for this. Those kinds of things will also be present, even though you’re not going to be the only kid in the class whose parents are divorced anymore. There’s still a very difficult impact on the kid.

What does a divorce change in a child’s life?
Your identity, your space … your whole definition of yourself. Trying to get the kids to talk about it and to be able to express their feelings is another key part of what we’re trying to do—obviously at a very small level; it’s one class and it’s just a couple of hours long. The feedback that we get from the kids and the parents encourages us that it’s helping the kids express themselves more, and feel comfortable knowing that they’re going to have two homes now and things like that.

If a kid isn’t talking to their parents about the divorce, does that mean they’re not affected?
I think that’s a typical thing, where parents say, “No, I think my kid’s probably doing just fine.” And I’d like to encourage parents even if their child is not expressing or acting out, to come to the class anyway because there’s just no way that this major change in a child’s life is going to be without impact. For some families, it’s obviously a very healthy change to get a divorce, but regardless, it’s a big transition. The child can learn some skills to help get through this transition. A lot of studies show that, particularly at this age group, divorce can have a big impact, so anything we can do to minimize a negative future reaction … and I would hope that most parents would be hoping the same thing.

Can this class work in conjunction with other classes or even just at-home discussions?
It’s an introduction. In an ideal world, it would be complementary, and parents would be encouraging the same things that are taught in the class. And of course, some schools have opportunities, and you can do it through private therapy, but that’s cost-prohibitive for a lot of families. But hopefully even this two-hour piece can help stabilize the situation for them. It can be a springboard for them talking on their own, which is really important.

What’s your role in the class?
Mine is really a fun role. The kids are brought up to the courtroom and are shown around a little bit. There’s a gavel in the courtroom, and I can hear the instructor saying, “Now what’s this called?” and the answer is usually “Oh, that’s that hammer.” And then she asks, “What do you do?” and they’ve seen it on TV, so one child will tap it, and say “All rise,” and that’s my cue. The judge appears—“poof,” there’s this judge there, in a robe.

As the judge, I just tell them about the courtroom and what happens in there, and that children don’t usually come to court because this is grownup stuff that they shouldn’t have to be worrying about. They’re sitting in the jury box while this is going on, which is kind of neat, and then, typically, the judge would come down and unbutton his or her robe and usually has something casual on underneath—it’s a Saturday morning so we’re not dressed as nicely. I think that’s a little shocking to the kids that they’re not all business suits under there.

The visualization—to see that one parent would sit over here and one parent would sit over there—is good for them. It demystifies it, and I think the kids get a kick out of being in court, and they start feeling that it’s not a scary place. I think that, as a kid, that would be a remarkable opportunity because, luckily, none of them has probably been in a courtroom before and hopefully never will be again.