Do all animals yawn and stretch? 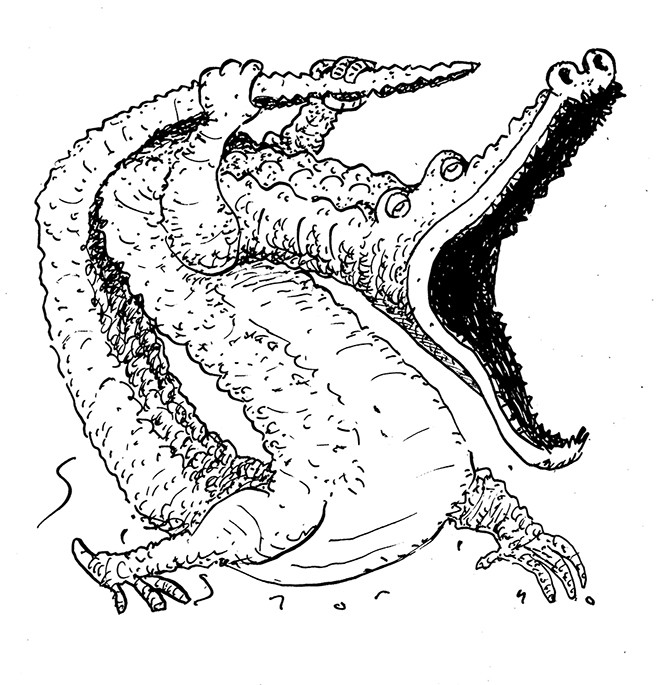 The other day I woke up, stretched, yawned, and wondered: Do all beasts, large and small, stretch and yawn? What about rhinos, hippos, ants, or even the wee little microscopic things? —Mr. Eddie

All beasts? Sorry, Eddie, no, and as it happens the very largest of earth's creatures aren't known to yawn. But that still leaves a lot of yawning animals out there, some of them so small they haven't been born yet: Thanks to a 1989 paper out of Newfoundland, we can confirm the occurrence of fetal pandiculation in sheep.

Pandiculation will turn out to be a very useful word here; as defined by the OED, it's "an instinctive movement, consisting in the extension of the legs, the raising and stretching of the arms and the throwing back of the head and trunk, accompanied by yawning." The ovine womb's not a huge place, but apparently it'll accommodate a decent stretch. Prenatal yawning and stretching isn't limited to sheep, either: Pandiculation can be seen in fetal humans, as early as 12 weeks after conception.

In fact, in the animal kingdom, pandiculation falls along clean lines: with a few notable exceptions—whales and giraffes seem to have evolved differently—it's near-universal among vertebrates, both cold- and warm-blooded. This includes your rhinos and hippos, then, Eddie, but not ants. (Lacking lungs, ants are pretty much categorically excluded from yawning.)

The widespread nature of this behavior is its greatest mystery: What's the point of pandiculation? You figure there must be one. As a contemporary scholar of yawning, the French physician Olivier Walusinski, has put it, "Its survival without any notable evolutionary variations is an indication of its functional importance."

Not just evolutionarily favored, pandiculation is in fact hard-wired into our nervous systems. How hard-wired? Famously, medical patients paralyzed on one side of the body have been observed, when yawning, to involuntarily raise the arm that's otherwise immobile—"with the muscles of the paralyzed limb activated nearly as much as those of a normal limb would be in a voluntary movement," one paper reports, going on to mention that yawning can be seen, too, in animals whose brain stems have been severed from the cortex.

These "decorticated animals," the paper continues, are also able to "feed themselves, express rage and fight, and have sexual intercourse"—i.e., to engage in the behaviors most associated with the basic drive for self-preservation. That pandiculation originates somewhere in the brain stem or the hypothalamus—the parts responsible for involuntary movement, mood, metabolic upkeep, etc., as opposed to higher-order thinking—lends further credence to the idea of its performing some vital function.

But what, exactly? I first addressed this about 30 years ago, and report back today with an update: the jury's still out. (Back then I cast some doubt on the notion that yawning increases oxygen levels in the brain, and I'm pleased to say the science here has solidified—that idea's bunk.) Our biggest clue is that pandiculation seemingly occurs when vertebrates are in transitional states—between sleep and waking, or switching between discrete activities. Beyond that, we're still formulating hypotheses. A couple of the more interesting guesses:

Pandiculation enhances alertness. Yawning might serve to heighten our vigilance when we need it most, or at least when our ancestors did: upon waking, around mealtimes, and in threatening situations. This would explain why, as neurobiologist Robert Provine notes, army recruits about to jump out of an airplane for the first time have been observed yawning more as the big moment approaches, or why Olympic athletes might yawn as they settle into the starting blocks. Under this theory, yawning when you're bored might not mean you've spaced out; it could be your brain stem trying to get you back in the game.

It regulates temperature. In a 2007 study, researchers asked subjects to hold hot or cold packs to their foreheads and then recorded their yawning. They found that the cold-pack group yawned significantly less, suggesting that yawning might be a way we keep the temperature down in our brains, where thermal management is a real issue—they use a whopping 20-plus percent of our metabolic energy.

It keeps muscles shipshape. A 2011 paper wondered whether involuntary stretching and yawning might not have something to do with the maintenance of the myofascial system. That is, pandiculation gives us a regular chance to snap our muscles and connective tissue back to a kind of equilibrium, ensuring their ongoing functioning.

I'll add one last note on the related phenomenon of contagious yawning, the tendency to empathetically "catch" yawns from others. Animals that do this form a far more exclusive group, apparently all but restricted to humans and our closest relatives and friends: great apes and dogs, mainly. Recent work has found that dogs are more likely to yawn contagiously when the originating yawn comes from their owner rather than from a stranger, and that contagious yawning in humans may reflect in-group/out-group prejudices—that even this empathetic behavior, in other words, could indicate things like unconscious racial bias. Yawning: another perfectly good animal behavior that humans have somehow managed to muck up.