For more than 30 years, Kyoto has remained a champion of Japanese cuisine. 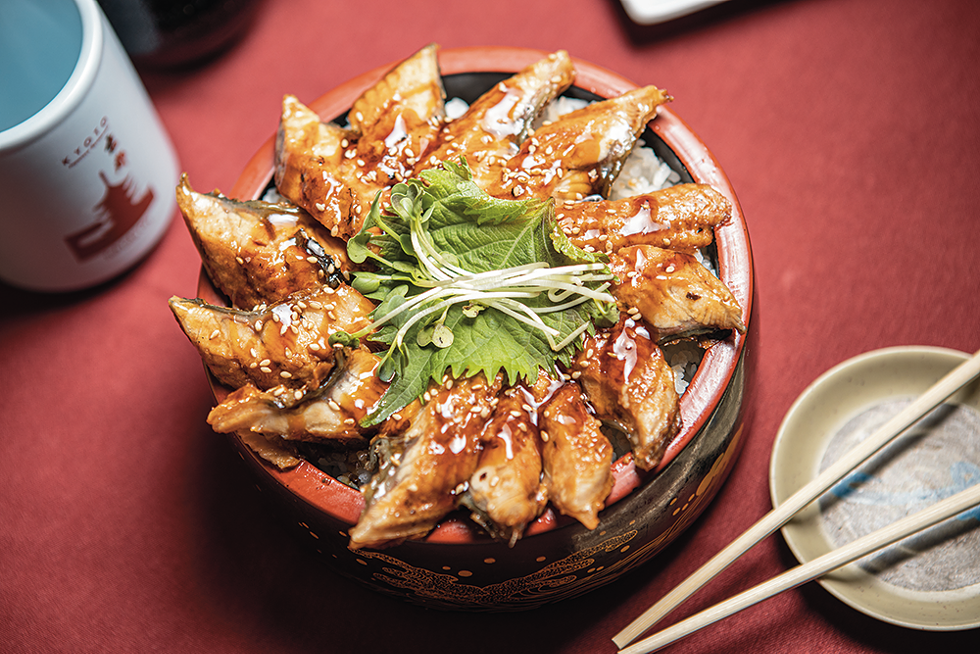 It's a bit startling to see how easy it is for the rich heritage of Japan's incredibly vast and nuanced cuisine to get pigeonholed into California rolls. There are several local places that feel like they can call themselves Japanese restaurants because they've added a few yakitori skewers and a bowl of edamame to their voluminous sushi menu. Frankly, that doesn't seem right to me. While sushi remains an important part of Japan's culinary identity, it's so ubiquitous here in the states, that it often eclipses the wider spectrum of what Japan has to offer. Truth is you could spend your whole life classifying, studying and enjoying Japanese cuisine without even scratching the surface. Restaurants like Kyoto (1080 E. 1300 South, 801-487-3525) are rare finds because they're places where you can get your sushi fix while opening your eyes to other traditional delights.

Kyoto opened in 1984 (the same year as City Weekly), and has occupied a cool, minimalistic spot near the Westminster College campus ever since. Sam and Yoshiko Tada conceptualized and created the restaurant after immigrating here from Japan. It was a tall order to bring the traditional cuisine that the Tadas grew up with to Utah, especially since their chosen location was essentially a restaurant burial ground, still haunted by ghosts of bistros past. Their passionate dedication to traditional cuisine, prompt service and keen sense of atmospheric evocation clicked, however, and the restaurant has been a neighborhood staple ever since.

Perhaps the most interesting thing about checking into Kyoto today, is seeing how the restaurant has managed to evolve and adapt to the industry. The addition of a sushi bar in the early 2000s helped them find their niche among relatively few sushi-exclusive Japanese restaurants, but it hasn't overshadowed the Japanese classics that originally put them on the map. Despite the fact that the Tadas transferred ownership to the LaSalle Restaurant Group a few years ago, Kyoto has remained true to the aesthetic and menu that makes the place special.

When you're after something quick, filling and tasty for lunch, Kyoto's selection of donburi rice bowls are ideal. You can get these with teriyaki chicken, shrimp and pork—but why limit yourself? The unagi donburi ($13, pictured) takes the rice bowl formula and adds tender, melt-in-your-mouth slices of broiled freshwater eel. As someone who had never tried eel, I can vouch for its awesomeness and accessibility—the flavors are similar to salmon, but it's the way that silky texture melds with the sticky rice that makes this a dish worth forsaking your comfort zone.

For those who aren't quite sure what to get for lunch, the recently added lunch box ($15) is a bento-style roundup that includes chicken teriyaki, ebi tempura, gyoza, tuna sashimi and a California roll. It's a box of tried-and-true Japanese favorites—perfect for indecisive diners or for those looking to get a sample of what Kyoto can do before delving a little deeper into their bag of tricks.

I've become a fan of Kyoto's combination dinners ($23) that let you choose two items from a wide variety of house specialties. I went with the beef sukiyaki—a rich and unexpectedly sweet stew of sliced beef, onions, mushrooms and soba noodles—and an order of nigiri of your choosing. Overall, the sukiyaki was very good, but I found the sweetness to be a tad overpowering—when it arrived in its steaming bowl of chocolatey brown broth, I was expecting a mainline of unctuous umami notes only to encounter nondescript sweetness that felt out of place. The nigiri was exactly what I was hoping for—fresh, subtle and simple.

Between my visits, I found that Kyoto is at its best during a busy lunch rush. Service is more casual, in stark contrast to the restaurant's vibe come dinnertime. During dinner, servers don kimonos which infuse the atmosphere with an air of old-fashioned formality that feels out of place in a restaurant known for looking forward. Regardless of when you choose to visit, however, you can rest assured that you'll be getting a fresh and unique taste of Japan—with or without sushi—at Kyoto.