Ballet West's spring production continues a year of moving forward through the pandemic. 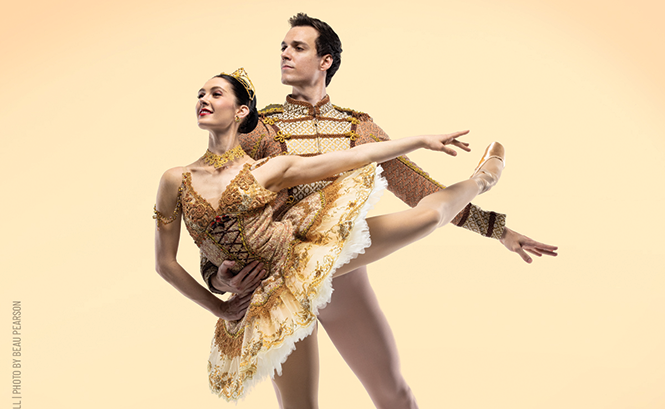 A year and change into the COVID-19 pandemic, many local arts organizations are only just beginning to emerge from a long hiatus. But while a new Ballet West production at the Capitol Theatre might be considered part of that re-emergence, it's more like a continuation of how the company has been operating this whole time. To paraphrase the immortal words of LL Cool J: Don't call it a comeback, they've been here all year.

Precious Gems does bring Ballet West dancers back in front of live audiences at the Capitol Theatre for the first time in 2021. Yet the company has been visible and active in a wide variety of ways since last March, including a live performance in November, operating its summer instruction program and presenting a broadcast version of its annual The Nutcracker. "Except for a small amount of time," says Ballet West artistic director Adam Sklute, "we never completely shut down."

It certainly wasn't clear that would be the case a year ago, as everyone faced uncertainty. "I think in the very beginning, in March 2020, when we had to cancel everything in the spring, there was this immediacy and urgency," Sklute says. "Everything felt very panicked, but we didn't have enough time to think far enough in the future to get too depressed. ... I knew that I just had to make people feel safe, confident and solid in the knowledge that we were moving forward."

That included planning for a way to hold Ballet West's Summer Intensive program at a time when in-person work seemed impossible. "We were the only summer, in-person intensive program in America," Sklute says. "We worked with such strict guidelines and measures, and it ended up working, with not a single [COVID] case. It was incredibly difficult and demanding, but I can say it gave us courage, and gave us this sense that we could go forward."

Going forward included a November program of contemporary works for live audiences, though it did require a lot of re-working to be able to stage the program safely. Sklute was even in the process of planning a reduced, socially distanced version of The Nutcracker when case counts ballooned, and the announcement came that Salt Lake County arts venues would be closing down again. "It was heartbreaking to cancel it," Sklute admits.

Yet out of that heartbreak came another unique opportunity. Ballet West had filmed The Nutcracker for its 75th anniversary production in 2019, which meant there could be a way to present it to audiences—although even that required some scrambling. "We got connected with KSL through our board chair," Sklute recalls, "but they couldn't even think about things until the election [in November] was over. That's a lot of editing to do in a very short time."

Ultimately, however, KSL donated three prime-time slots during the holiday season, an act of generosity Sklute greatly appreciates and which he says resulted in more than 1,000 first-time donors to Ballet West. "William Christensen's Nutcracker is a very big part of our community," he says. "To be able to give it, and give it in a safe manner, we felt we were able to give the community a gift."

The return to live production with the Precious Gems program feels like another gift after the long pandemic winter. As Sklute and his team were selecting the works—which replaced a previously planned program including Bolero and The Dream due to the realization that those works could not yet be presented in a safe manner—he says that they really hoped to emphasize a festive tone. "I wanted it to have a celebratory quality to it, a gala-type approach," Sklute says. "So each of the works, some of them are quieter, some are big and splashy, but all have kind of a glamor to them which is part of what I wanted to project."

Additionally, he says it was important to present more classical works, both as a balance to the fall program of contemporary pieces, and for the very pragmatic reason that it was of benefit to the dancers. "Our dancers had been off for a long time. Nothing rebuilds their strength like classical ballet," Sklute says.

Now, looking forward again, Sklute believes that there's "a light at the end of the tunnel, and that makes us feel very hopeful." Planning for next season has begun with the assumption of even more return to normalcy, while Ballet West also plans to apply the lessons learned in the past year of incorporating more digital presentations as a regular feature. And Sklute says there's a greater appreciation for what they've been able to accomplish and a realization that they shouldn't take what they are able to do right now for granted.

"I'd say [in the fall], 'Let's just enjoy this right now. Let's live in the moment, because we don't know when we might be shut down,'" he says. "Looking back, we're going to say what a unique moment of time this was."