Don't Fear the Dark Side 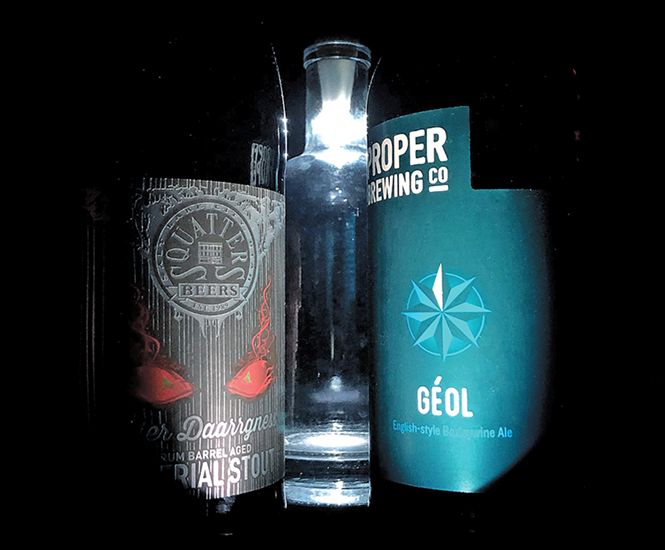 Over the holidays, while I was having my fingernails pulled out—err ... I mean, Christmas shopping—I came across a solid get-out-of-jail-free card in the form of a Salt Lake City beer pub. As I'm sucking down my well-deserved barrel-aged imperial stout, two girls sitting next to me at the bar scoffed at my black brew and exclaimed, "How can you drink that motor oil shit?" Granted, they had never tried this particular beer, but nonetheless I spent the next 20 minutes playing beer missionary—trying to bring them over to the dark side. I failed.

However, City Weekly readers might be more receptive. Dark beer is a pretty broad term, especially if you're used to a diet of fizzy yellow beer. If you're not a fan of walking with darkness, try it out once in a while; you might be surprised by the kaleidoscope of flavors that are out there, like these two new dark beers.

Proper Brewing Co. Géol (Yule): Named for the winter solstice, this English-style barleywine pours a nice cherry-red color with darker ruby accents. There's a nice sherry, almost brandy-like nose. Cherries, figs, and notes of apples are present, with hints of gingerbread if you dig down deep enough. The taste follows the nose quite well. I'm happy this isn't a sugar bomb, like some other English-style barleywines. Dusty flavors of cocoa powder combine with deep toffee and leather up front, preparing the palate for the malt assault that soon follows. Flavors of raisin, caramel, tobacco and dark fruit round out the flavor explosion. The finish has some barely perceptible herbal hops that keep the malts from spiraling out of control. No flavor overpowers the other. They all play well together. It's obviously a barleywine, but not such a big one that you have to back off after each sip. It could have a wee bit more body, but that's just getting nitpicky.

Overall: English-style barleywines are experiencing a bit of a resurgence in Utah. Typically, most of the barleywines you'll find locally are more American in style, with high doses of bittering hops. This 9.5 percent ale is a nice any-time-of-year beer that happens to double nicely as a full-bodied winter warmer.

Squatters Outer Daarrgness: This newest incarnation of Outer Darkness pours like used deep ebony oil, with a full finger of light brassy, mocha head. As I hover above, I'm immediately hit with the wafting aroma of dark rum. Inhale a little deeper, and I'm met with charred oak, dark molasses, chocolate and dark fruit. It's a very inviting nose that piques my interest, due to the fact that it's not the typical whiskey character I've come to expect from barrel-aged imperial stouts. The taste picks up as the aroma started, with rum sweetness and molasses right up front, followed by a lightly charred oak. Once my palate adjusts to the shock of rum, dark fruit and cocoa work to sooth the tongue from the light boozy wash. A slight Kahlua character becomes more prevalent as this beer warms. A very tasty 11.6 percent brew, with some very nice complexities.

Overall: This offering from Squatters makes me wonder what else they have up their sleeves. Very nice, well-balanced complexity going on here. It's a great brew, though I just wish there was a bit more body.

These two beers have been around for a few weeks; the beer nerds of my tribe are quickly snagging them up for cellaring and trading. I'd get over to Proper and the Utah Brewers Cooperative today. You'll thank me. As always, cheers!