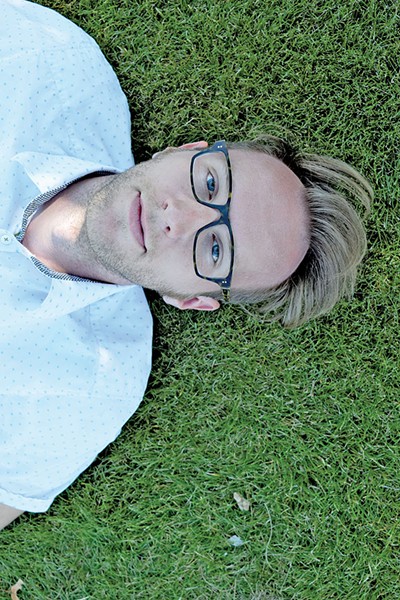 Instead of just another political campaigner, salesperson or missionary knocking at your door, imagine it is Derk Boss, a Salt Lake City troubadour with a master's degree in poetry and a guitar, serenading you and making you his latest audience of one.

How did you get into music?
I suffered from insomnia as a teen and my dad introduced me to Moody Blues and Elton John. I would listen to "Nights in White Satin" and "Belfast" on tape to fall asleep. Music made such an impact on my life, so I saved up from my part-time job, bought a guitar, took lessons and practiced two hours a day.

How did you come up with door-to-door singing?
I've been writing music for a long time and wanted to do it full-time, but I needed a way to break in. I had done door-to-door sales in Oregon in 2011, so I knew how to canvass. That morphed into selling music door-to-door with these one-song private concerts. People say you can't make a living from it. A lot of very good musicians can't make it work, but I'm just willing to do whatever it takes. My tenacity sometimes even surprises me. When I play for people, it really shocks them. They are like, 'Wow, why aren't you already ...?'

Like Billy Joel's lyrics in "Piano Man," asking, "Man, what are you doing here?"
I feel like that—like I am on the verge of really big things. It's just a matter of keeping going. The lead singer of Panic! at the Disco was born in St. George and worked in a fast-food restaurant singing for people. He put himself out there.

With a master's degree in poetry, why give up teaching college English ?
I didn't feel I was following my calling. My father, who was my biggest fan, passed way from prostate cancer in 2008. I had brought my guitar to sing songs to him I had written. [One of] the last things I remember him saying was, 'You know, it's fine that you are getting your degree in English, but you really could have made a career in music if you had decided to do that.' And the way that he said it was like I still could. And that has just replayed in my head a lot. And when I was teaching at [Southern Utah University], I kept thinking of that like I really think he was right. A lot of people I've met have had parents who were not as supportive of their music. I just feel really fortunate that my parents gave me that extra confidence that this is what I should be doing.