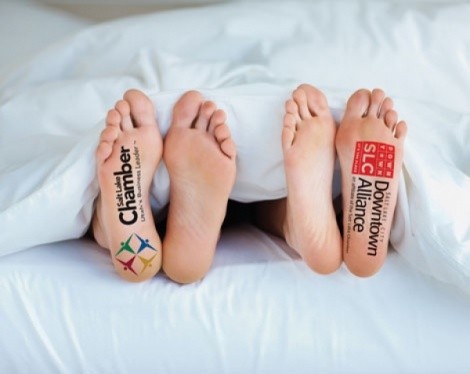 While the city wrestles with whether to place new restrictions on panhandling—banning after-dark requests for a dime, for example—some are looking closely at the most visible supporters of the proposed ordinance. The Downtown Alliance—a recipient of nearly $800,000 in downtown property-tax revenue each year—is a wholly owned subsidiary of the Salt Lake Chamber.

Though technically the nonprofit does not use tax dollars to pay chamber staff salaries, including chamber president Lane Beattie’s $436,000 annual compensation, some are crying foul, anyway.

It’s ironic, says Crossroads Urban Center’s Anti-Hunger Advocacy Project coordinator Bill Tibbitts, that the chamber/Downtown Alliance would argue that panhandlers are harming downtown business “when they take ... tax money from those same businesses each year and pay their CEO $400,000 per year.”

The Downtown Alliance is not a taxing entity itself, though it was formed to receive and spend tax money on downtown businesses’ behalf. In the late 1980s, talks began to form a business organization devoted exclusively to downtown, largely for promotion and lobbying purposes. Four separate organizations agreed to join forces in hopes of better coordination and communication. One of those groups was a downtown committee of the Salt Lake Chamber, whose then-president, Fred Ball, supported closing his organization’s downtown committee in favor of supporting an independent organization. Salt Lake City would close both the Central Business Improvement district—which already levied a special downtown tax—and its Regional/Urban Design Assistance Team, an architecture team tasked with making recommendations to improve downtown.

By 1993, negotiations had settled and the Downtown Alliance was formed. The city contracts with the organization to manage the funds and individual taxpayers vote every three years to sustain the tax.

Favor for an independent organization had disappeared by 2002, when the chamber—a statewide membership organization now with 6,100 members—had reorganized its downtown committee and began discussions for a merger. By April of that year, both boards had voted to join forces.

“They call it a merger. I’ve called it a takeover,” says Sam Weller’s Bookstore owner Tony Weller. “I was an [Alliance] board member when the takeover—or merger, if you prefer—occurred and I was very opposed to it.” Weller says it’s strange to have a neighborhood-based “quasi-government entity” largely funded by tax dollars be under the control of a private entity composed of thousands of members and headed, Weller says, almost exclusively by representatives of big business. Weller says he’s a member of the chamber in hopes of influencing its decisions, but has reservations about his support of it.

At least, however, Weller can choose to stop paying his membership dues to the chamber. The tax that supports the Downtown Alliance is more difficult to dodge. If landowners who control at least 51 percent of the property within the downtown district agree to the tax, all the property owners must pay it.

Downtown Alliance Executive Director Jason Mathis—who, by virtue of his position at the Downtown Alliance, is also the executive vice president of the Salt Lake Chamber—says the merger just makes good financial sense. “It was really a sense of how we could save … the downtown business community some money.” The pairing has allowed the two organizations to share resources—from employees to copy machines, even office space.

He says the alliance maintains independent control of its operations. The Downtown Alliance Board of Trustees, for example, oversees the spending of the tax revenue. Aside from $88,000 per year that the Downtown Alliance pays to the Chamber—its portion of the cost of shared resources, like staff time—it’s financially independent, as well. “That’s really the only financial relationship between the organizations.”

Salt Lake Chamber Chief Operating Officer Heidi Walker says that, like Salt Lake City itself, “Utah’s capital city chamber fulfills a statewide business function.” They also have synergistic interests, Mathis says, because the chamber is largely run by people with downtown business interests. They file taxes separately and have separate bank accounts. Lastly, Mathis says, downtown business people are guaranteed at least one-third of the board seats on the chamber board and also maintain their own board meetings.

As for Beattie’s wage, Mathis says, “The tax dollars do not go to pay Lane’s salary.” Walker adds that Beattie’s wage is based on “the performance of the organization, the CEO’s significant public- and private-sector experience and market-based wages for someone in his position.”

While taxes don’t pay Beattie, they do pay alliance employees’ salaries, and those employees report to Beattie, and, ultimately, the chamber board.

What’s the impact of all this? Tibbitts says but for the Downtown Alliance, Salt Lake City would not even be considering panhandling restrictions that, in his mind, criminalize poverty. “It would never have come up. There wouldn’t be a panhandling ordinance to talk about if the Downtown Alliance had not been pushing for it.” Among other things, the alliance arranged for dozens of billboards and a Website that urged city residents to “End Panhandling” by donating to organizations, not individuals. “We’ve got a really progressive chief of police [Chris Burbank] and … very progressive city prosecutor in Sim Gill. There could have been a more constructive conversation about how to better get homeless people off the streets.”

Amy Coady, marketing director for Squatters Pub Breweries, is the immediate past president of the merchants association, of which Weller is a current board member. Coady, who has also served on the Downtown Alliance board, says the alliance has become more organized and more structured since the merger, and she feels it remains responsive to the needs of downtown businesses. “It’s intended to make people feel safe,” she says of the panhandling ordinance. The Nov. 16 meeting, in which the ordinance was discussed by the city council, “was one of the hardest city council meetings I had ever gone to. It was hard to hear that the homeless feel like they’re losing their rights.”

Ginger Phillips, a co-founder of homeless youth organization Operation Shine America, helped organize homeless individuals to go to that meeting. “One of our youth said that she panhandled to get to the Salt Lake City Council meeting that night so that she could get her voice heard,” Phillips says. “One other homeless youth was diabetic, and he said a couple times he has gotten to the point where he needed some orange juice … and he had zero money. He thought that if he asked for some orange juice, under this proposed ordinance, it would be against the law.” And if, after dark, he asked for juice, “or anything of value,” it would technically be a class B misdemeanor under the proposed ordinance.

In a survey of 100 residents by the Downtown Alliance, 45 percent said panhandling is a “major problem” in Salt Lake City.

The city council voted 4-3 to continue debate on the ordinance.