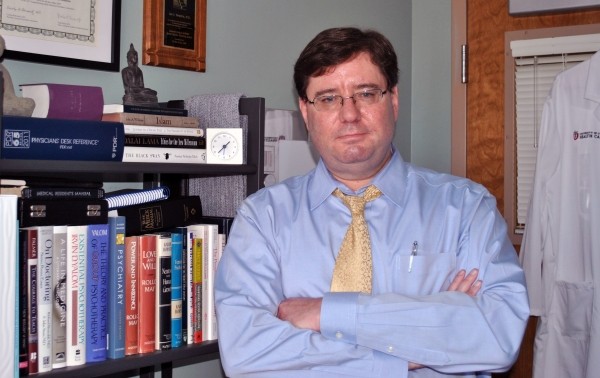 Jan Terpstra is an assistant professor of psychiatry at the University of Utah School of Medicine who will be speaking on the topic of “Mental Illness, Stigma and Society” at the Salt Lake City Main Library on May 10 at 7 p.m.

What stigmas do mentally ill people face?
One of them is fear of violence, that these folks are inherently violent, or will become violent, and harm others. The other two are more unusual that people don’t think of often. One is the sort of romanticization of mental illness, and the third is this idea of folks with mental illness having this compensatory creative capacity that somehow makes up for the fact that they have this mental illness—like in A Beautiful Mind—that there’s this redemptive quality that makes it OK that they have a mental illness.

In your ideal world, how would mental illness be handled by society?
There’s an estimate that on any given night in the United States, about 150,000 severely mentally ill people are homeless and in the streets. If I said, “On any given night there are 150,000 people with severe, end-stage cancer—who can’t afford their medications and can’t work because their illness is so severe—sleeping on the streets,” there would be a national emergency. We have to recognize mental illness exists, and that these are very severe illnesses; they are no different than any other medical illness that we treat. It doesn’t mean we should be throwing medication at them; we should be addressing their psychological needs, and we should be addressing the social issues of these folks.

Secondly, society needs to recognize that what we’re doing now—treating people in crisis, and then underfunding outpatient resources—is ultimately untenable economically, and creates these other problems that people don’t think about very much but are huge issues. The three largest health-care providers in the United States are jail settings: Riker’s Island, Cook County Jail System and the Los Angeles Jail System. That’s ridiculous. Until we start seeing that we need to fund the programs in the community that keep these people healthy and allow them to live lives like other citizens, we’re always going to have this problem.

How do so many mentally ill people end up in prisons?
A lot of folks with mental illness get into the justice system through what are called nuisance crimes. Someone who’s homeless trespasses on private property or urinates in public or makes a disturbance on the street, and then they get into the criminal justice system, which, despite their best efforts, is really ill-equipped to manage those folks in that setting. If you talk to police officers and people in the judicial system, they see it as just much a tragedy as we see it from the outside as mental health professionals. Prisons and jails are notoriously not set up to not be conducive environments for mentally ill patients. They’re loud, they’re disruptive, they’re violent places, and those are not places for chronically mentally ill patients to do well. The justice system does not have the resources to manage these folks. And once they get in, it’s really hard to get them out.

Criminalization of people who have committed nonviolent crimes is enormously cost-draining. And if even a fraction of those resources could go to prevention and funding outpatient care, it’d be fantastic. There are illnesses that we do that for—there are philanthropic organizations that put huge amounts of money into cancer. But for some reason, society—for some of the stigma reasons that I’m going to talk about—does not do that as much for mental illness. There’s not a huge push to spend billions of dollars on outpatient health resources.

Why aren’t people getting treatment?
We’ve defunded mental-health programs to the degree that the level of care we provide these days is usually in-patient care with patients who are in crisis. The interim levels of care are just not available to keep the mentally ill stable in the community. And then they end up being taken care of by non mental-health professionals, like the wonderful folks at the Road Home, the Fourth Street Clinic. Those folks end up having to deal with issues they’re not prepared to deal with, and this has entirely to deal with the fact that our society has decided it’s OK to let these folks not be treated, and end up homeless or in prisons.

How do people with mental illnesses end up on the street?
If you deal with a severe mental illness, you’re less likely to be hired in a job, you’re more likely to be hired in a position that doesn’t make a lot of money, and if you act in ways that other people find strange or different, you’re much more likely to be fired. But people who live paycheck to paycheck in the current economy and are severely mentally ill, then they can’t afford treatment, they can’t afford medications, and then they get severely ill and they end up on the street. And then they have to rely on these wonderful organizations like the Road Home. It is not a good societal approach to this issue.

What do you think of efforts to ban panhandling?
Those are knee-jerk reactions that don’t really address the fundamental problems. They blame the victims of homelessness rather than look at why we have those problems. I understand that a private business doesn’t want to have panhandling in front of their business because they’re worried it’s going to cost them money; I understand that completely. But the problem is that we have created a situation where we allow people to be homeless in the streets. Criminalizing it doesn’t do any good.

What do you think of the red “donation” meters in downtown Salt Lake City, which encourage people to put their spare change in the meter to benefit homeless organizations, rather than giving the change directly to someone asking for it?
That’s a great idea. Having lived and worked in San Francisco for some time, which has a very severe homeless situation, it became clear that simply giving people money often wasn’t very effective because it does feed addiction issues. The way of having people donating and know that the money—even small amounts—go to resources that actually help people get off the streets, that’s a fantastic idea.

Does the difficulty of diagnosing mental illnesses—as compared to, say, cancer—contribute to the stigma surrounding them?
That’s a perception that people have outside of the field, that because it’s a field without biomarkers—specific blood tests or head scans—that somehow that reduces the validity of the diagnoses. It makes diagnosis more difficult, and there are gray areas, but the vast majority of folks with mental illnesses like schizophrenia or sever bipolar disorder, those are not hard folks to diagnose.

It seems even depression has something of a stigma; people who are depressed are often told to just feel happy, or look on the bright side, that their depression isn’t a real thing.
That they’re making it up, or it’s a moral choice, or it has something to do with their strength of character. Everybody on this planet gets sad at times, but that’s very very different from suffering from depression. And people who haven’t experienced that firsthand often don’t understand what mental illness really means and feels like. And once they have that experience, that misunderstanding goes away pretty quickly. I’ve worked with lots of medical students who’ve never worked with anyone with a mental illness prior to medical school. Many of them, when they start seeing patients, don’t know what they’re seeing and are not sure what’s going on, or have discomfort. But once they’re done working with us, they have more of an understanding, they’re more comfortable working with those folks.

What are the other ways people with mental illnesses are misunderstood?
We see people with mental illnesses as unusual or different, and we don’t really get to know them and understand that we have much more in common with the severely mentally ill than we have things that are different. What they want out of their lives is exactly what we want out of our lives. We’re all human beings, we all want to know that our lives have meaning and relevance, we all want to be loved and cared about, we all want to have a place to live and a certain amount of safety and food to eat and clean clothing. That’s exactly what those folks want; we just have trouble understanding the language in which they express it. And because of that, we are scared of them, or we try to lessen or mitigate our anxiety that we treat these people terribly by saying, “Well, that’s just rebelliousness, they choose to do this.” Or, “If you’re autistic, you’re a savant.”

Is that why news stories posthumously diagnose people like Beethoven with bipolar disorder?
There are good reasons for why people have tried to point out that really wonderful, creative people have had to deal with mental illness. It’s a way of helping people understand that these folks are no different from anybody else, and really bright, talented people can be mentally ill as well. Where it does a disservice is to suggest that somehow the mental illness is the reason they have these gifts. If you look at the literature on the most creative people, most of these folks are not particularly creative when their illness is active. I would suggest that Beethoven was a genius despite having mental-illness issues. I think the reason that particular stigma exists has to do with society’s discomfort that these people are suffering—somehow it makes them feel better. The reality is that no one wants to have a mental illness.

So that’s the “creative” stigma—how are mental illnesses romanticized?
Some believe forms of mental illness are not really illnesses so much as they are forms of rebellion or unorthodox behavior that we’re calling mental illness. And while psychiatry always has to be sensitive to overdiagnosis, for the severely mentally ill, there’s nothing romantic or rebellious about it. Famous psychiatrist Artie Lange said, “Schizophrenia is a sane response to an insane world.” And anyone who’s worked with folks with schizophrenia recognizes that this is not a lifestyle choice. No one would endure the kind of pain and suffering, humiliation and degradation that schizophrenia brings, as a form of rebellion. But you see this in movies, in One Flew Over the Cuckoo’s Nest—even though it’s more of an allegory of the Vietnam War—there’s this whole issue of McMurphy being this rebellious character who gets trapped in a mental health facility, and that’s misled people into thinking that severely mentally ill is somehow a rebellion against society.