Home for the Soul

A Salt Lake City club is devoted to helping the homeless—but not in ways you'd expect. 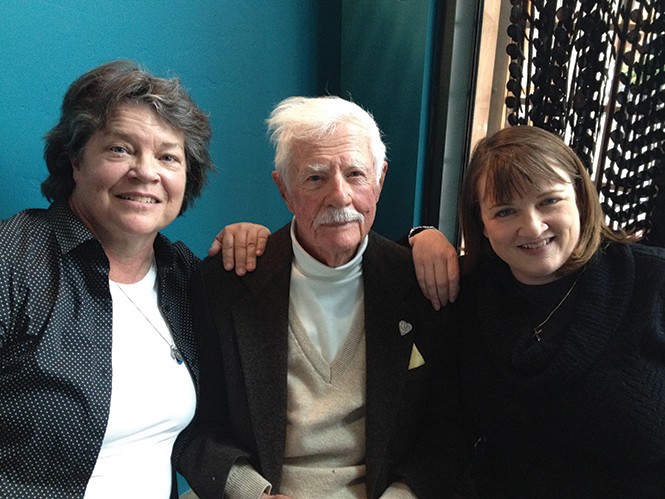 As cold weather moves in, a heap of local agencies and volunteers are mobilizing to help the homeless. But the Salt Lake City Marching & Chowder Club takes a different approach to the problem. Bountiful resident Lauren Smith (above, right) is secretary for the homeless-outreach group, founded by 92-year-old "Dr. John" Shannon (above, center, along with club vice president, Charlotte Mates, left). Smith notes that "Dr. John" began his work after talking to homeless people on public transit. The group bypasses the clothing- and food-donation route in favor of working to uplift the spirits of homeless people, offering them small gifts and engaging them in discussions. The club is open to the public and meets Tuesdays noon-1:30 p.m. at Same Sushi (423 W. 300 South, No.150, SameSushi.com). Memberships cost $1. Read more at SLCMCC.org.

Why were you drawn to the Salt Lake City Marching & Chowder Club?
I was introduced to Dr. John at the Rescue Mission when I went there to volunteer. He is my "chaperone" while we help serve lunch. At 92 years old, he still walks to the mission three times a week and says hello to people near The Road Home and the Weigand Center. He invited me to the first club meeting, and I was honored to take on the role of secretary.

Rather than fundraising and providing for basic needs, your group focuses on raising the morale of those who are homeless. Why?
The top-down approach has been used to address homelessness for a long time, with only limited success. We believe that any lasting change must come from within.

Your group sponsored the Two Rose Initiative. How does it work?
We passed out roses to women in the homeless area. They were each given two roses with a little note. The note said to keep one rose and give the other to a stranger who was somehow different from them. We hoped to appeal to the women's maternal instincts, as it would lessen fear and help them relate to one another better. Then, that would wear off on others. The only way to begin to shift to a more peaceful atmosphere is by way of strength and love.

Describe an encounter since beginning this work that's pinged your emotions.
I hesitantly approached some teenagers who were exchanging money. I told them that I have a teenage son, and I would be heartbroken if I saw him down there. One boy said they were just selling clothes. As I was preparing for rejection and expecting to be told off, he reached out and gave me a huge hug. I told them to take care of each other. It doesn't get much better than that.

Many try to avoid encounters with people who are homeless. Why do you think this is?
It is just plain awkwardness. Most people are not malicious. The way to bridge the gap is to reach out to each other.