Simple fable stuffed with too much extra plot 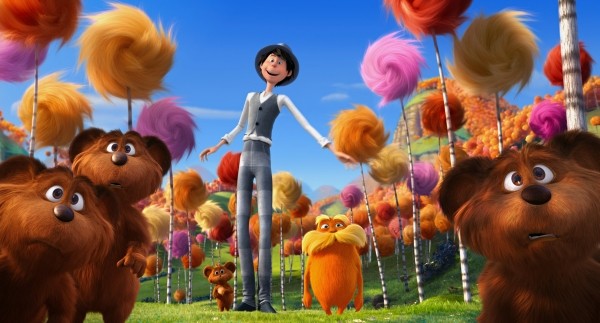 “There’s more to this story than what’s on the page,” announces the titular character in Dr. Seuss’ The Lorax (Danny DeVito) during the film’s proscenium prologue—and you can almost hear the desperation in his voice. Anyone involved in adapting the beloved works of Dr. Seuss knows that while kids may be an easy audience, their parents are another matter entirely—especially when it comes to fiddling with books they might have adored in their own childhood.


Turning Dr. Seuss into a feature film inevitably means adding a bunch of content to the simple picture books: the taunted-child back story of Jim Carrey’s Grinch; the careening chases of Horton Hears a Who!; whatever the hell it was that was going on when Mike Myers played The Cat in the Hat. Sure, it’s disappointing to find the good Doctor’s telltale anapestic tetrameter rendered as simple prose. But the bigger problem is taking a story that could be told in a few hundred words and trying to pretend there’s any need to tell it in a few thousand—the equivalent of a college student trying to fulfill the requirements for a “10-page term paper” by fiddling with the margins and the font size.


So in this telling of Dr. Seuss’ 1971 environmental allegory, the unnamed boy becomes an adolescent named Ted (voiced by Zac Efron), who is living in a walled, fully artificial city called Thneedville. The girl he has a crush on, Audrey (Taylor Swift), dreams of seeing a real, living tree, so Ted ventures outside the city to find her one—only to discover a desolate wasteland. There he discovers the Once-ler (Ed Helms), who relates the story of how he came to turn Truffula trees into thneeds, and how the odd little creature known as The Lorax tried to steer him away from his potentially destructive ways.


As rendered by co-directors Chris Renaud (Despicable Me) and Kyle Balda, the world of Thneedville offers an appropriate Seussian vibe of swooping curves and unsound architecture. The opening production number kicks things off with a solid burst of energy, giving some satirical bite to a world in which people have come to take for granted the fact that their waste disappears somewhere they don’t have to deal with it, and that a dip in the water causes children to start glowing. While the action set pieces feel unnecessarily frantic at times—and include the tired trope of the hipster granny (Betty White)—they’re also well-choreographed, from a bed floating down a river to a chase to rescue the last Truffula seed. It’s high-spirited, and a lot of the time it works.


Yet there’s a baseline level on which The Lorax doesn’t seem to understand that one more is sometimes too much. So instead of simply giving us the tragic myopia of the Once-ler’s Truffula-harvesting operation, we also get the villainous CEO O’Hare (Rob Riggle), who sees Ted’s nascent “green” consciousness as a threat to his business selling bottled fresh air. O’Hare may be the most interesting character design in the film—a Napoleonic tiny person with a Prince Valiant bob—and the intent may be to create a parallel that allows for a rousing finale, but the result is the kind of overkill flailing at evil corporate greed that almost makes one sympathetic with Fox News grumblings. Ditto the unnecessary addition of details about the Once-ler’s family, and how he was only trying to make his unsupportive mama proud. Far too much of the material tacked onto The Lorax does nothing to enhance the narrative or the themes. It just makes it longer.


Perhaps the filmmakers deserve credit simply for taking a stab at one of the more controversial Seuss works, wrapping a palatable coating of silly humor, catchy tunes and cute teddy-bearish barbaloots around the notion of individual responsibility for making the world a better place. But it’s too easy to feel the strain of taking the book’s 72 illustration-heavy pages and trying to turn them into 95 minutes of screen time. Dr. Seuss figured out how much he needed to say to get his story across, and said only that. Studios increasingly have a hard time grasping that fundamental principle of storytelling. Unless we viewers force them to stop padding plot, nothing is going to change. It’s not.