The screamin'-est drag scenes for Halloween. 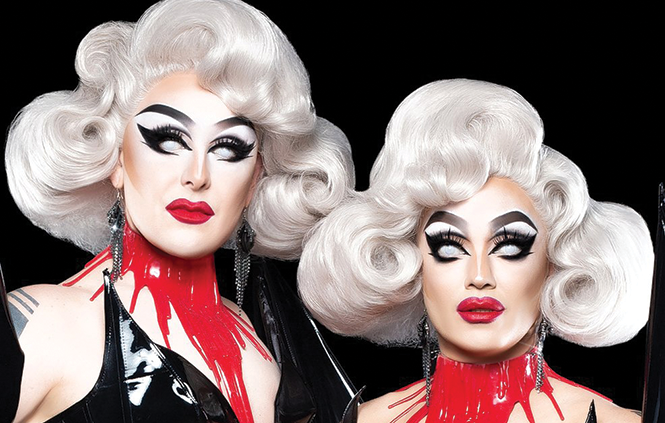 The drag community knows that the time is always right for a campy, funny and even raunchy drag show, but I'm sure the community would also agree there's no better season for it than Halloween. It's even more reason for local drag queens to get dressed in the most fabulous (and maybe scary!) costumes they can think of.

Now that October is officially here, it's time to consider all the opportunities to enjoy all our drag scene has to offer, and to tip our hats to these artists who keep the fun spirit of dress-up tribute alive year-round.

Here are a few of the places and events to look forward to visiting during this spookiest time of year.

The Boulet Brothers Bring the BOO! to SLC. Drag enthusiasts and Halloween freaks alike should know The Boulet Brothers. The pair of drag queens have made a name for themselves to rival that of RuPaul's Drag Race with their show The Boulet Brothers' Dragula, a horror-themed reality TV competition that caters to those who take their camp with an emphasis on leather and monstrous glam.

Before Dragula was in italics as a television show, though, it was a party—because before fame, The Boulet Brothers built a name for themselves as Dracmorda and Swanthula Boulet, party host extraordinaires, famous for events like The Los Angeles Halloween Ball and Queen Kong and Dragula.

They've also dabbled in books, film, podcasts and comics. When not hosting their hit show—which launched in 2016 and has seen three seasons—they spend their time visiting other stages at horror conventions, nightclubs and live events.

It's the latter that we'll get to be treated to here in SLC when they come by for a frightful night of drag and fear. Several of our city's own finest drag queens will be making appearances, including Ursula Major, who appeared on Season 1 of Dragula. Joining her with their own spine-tingling performances will be Tony Berrow, Agony Ray, Ellissdee, Gia Bianca Stephens, Kay Bye, Lisa Dank, Mona Diet, Sequoia, Sally-Cone Slopes, Justice Legacy, Krystal Kut and Lady Facade. And while the performers onstage will most definitely be serving spooky looks, that's no reason for patrons not to go all-out, too! Friday, Oct. 15, The Complex, 18+, tickets $25, at thecomplexslc.com.

Nights on Nights of DIVAS. Fans of the Jason Cozmo-hosted and themed Viva La DIVA Show nights will be delighted with local performances by the lovely DIVAS, masters of their caricature craft. While, throughout the year, the show focuses on a variety of themes, Halloween is certainly one of the more exciting times to see them live because performances include everything from tributes to classic Halloween films to pop-culture favorites performed on stage.

Examples of the drag fodder for the season include the wicked witch sisters from the classic 1993 Disney Halloween feature Hocus Pocus; Beetlejuice and company; Rocky Horror magnificence; and a fan-favorite take on the musical (and horrible car crash of a recent film adaptation) Cats. There will also be something for all the "monsters" out there in a Lady Gaga tribute complete with skeleton back-up dancers.

Stop by Why KiKi. If you haven't already, you need to visit this new hotspot for all things kitschy. The new bar in downtown SLC caters to costumes year-round, as a theme-night friendly, drag-always bar with an emphasis on super-extra tiki drinks. Thus far, theme nights haven included Halloween in July, cosplay night, '90s night and more.

Aside from frequent performances by drag artists like Sally Cone Slopes, Ursula Major, Lisa Dank and Lady Facade, a visit to this bar will transport you to a world bedecked in pirate drag. On the comfortable back patio, a mermaid arches from the prow of a ship, perfect for gazing on while sipping one of their island-themed drinks—usually neon concoctions punched through with several kinds of rums, glitter liqueur or candy garnish.

While their calendar still seems to be in the works online, news of their trivia nights, karaoke nights, Drag Race watch parties and themed nights can be found at facebook.com/whykikibar. Plus, you can reliably roll through on any night to catch some kind of drag performance, or even pop into Drag Brunch, where you can shake off your hangover with some laughs and cure it with some very life-like phallus-shaped waffles, complete with ooey-gooey syrup to dip them in. Why KiKi, 69 W. 100 South (right next to fellow newbies Varley and The Ivy), whykikibar.com.