Provo singer-songwriter clips to the core 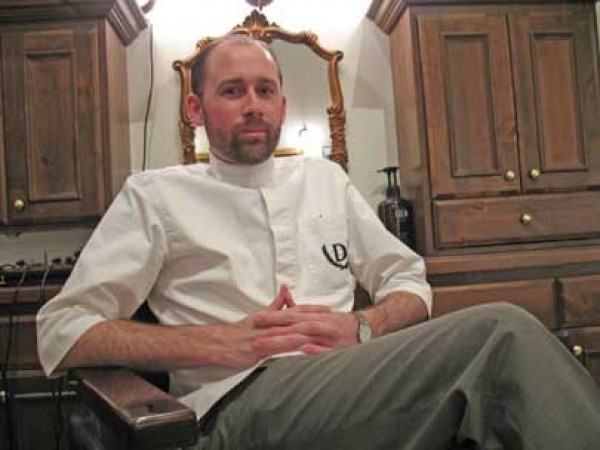 OK, I guess I do clippers.

A trip to the barbershop can be more than a trim. For some, it’s a chance to decompress, to chew the fat or to be informed.

Danburry Barber Shop (55 N. University Ave., Provo, 801-607-1093, DanburryBarber.blogspot.com) is oaky, homey and very nearly vintage. And the man himself—former traveling musician, now exclusively a recording artist and full-time, classically trained barber—has an aesthetic becoming of the scene, with slicked-back hair and oversize Dad-like spectacles. He stands over me with a pair of clippers and a comb—the haircut/interview commences.

Danburry began playing music in 2002, started touring in 2004, released a number of acclaimed albums and logged nearly 700 shows around the country in just over five years. Yet, he was at a crossroads.

While he tapers the back and trims the top, he explains the reasons for his departure from the stage to his latest pseudonym project, Damien Fairchild, to killing off Drew Danburry.

“With Drew Danburry, I painted myself in a corner,” he says. “People would say, ‘Oh, he’s a nice guy. He’s just ... nice,’ which totally sucks, because you don’t get paid and you can’t get upset about things.” He played his last show ever May 14, 2010, at Kilby Court.

“I then wanted to see what people thought about the music with me out of the equation,” says Danburry, who, in 2010, created two pseudonym projects: USS Leland and The Apache. The latter is where he first created the character Bastian Salazar (more to come). That same year, he enrolled at The Barber School in Midvale.

He pauses. “By the way, is that too short? I like it a lot; I just want to make sure you like it,” he says.

“Being a musician in Utah, there have been times when people have commented about my spirituality, or who I am as a person, based on songs that I’ve written,” Danburry says. “I want to disassociate myself from my songs as much as possible.”

The hair clippers continue to buzz.

It’s not uncommon for a balladeer to develop a character—from Bob Dylan to the contemporary Josh Ritter—but not many do it as a concept, a package.

So, Danburry created yet another false identity: Damien Fairchild is a 13-year-old boy who writes short, silly love songs in For All the Girls (February 2012). For Danburry, that age is the perfect iteration of pure, innocent love. “It’s probably the most unintimidating thing,” he says, adding that Fairchild is homeschooled, but his mother introduced him to literature and art; Fairchild lives in West Provo in a trailer park, and hasn’t quite eaten a spoonful of life’s harsh reality yet. “A lot of the songs were about me growing up and capturing those emotions,” he says

It’s on to lather and a hot towel on the back of the neck, a straight razor and the trimming off of errant hairs.

Danburry says he became a barber simply to make money. But it’s obvious there’s more to it than that, and there’s a crossover between his two professions. Musicians rarely have a one-on-one experience with listeners, whether playing at a bar or in that they’re not there when someone has headphones on.

Though he did still meet random folks on the road. “I liked touring for the perspective. You’re meeting different people and getting all these different stories,” Danburry says. “That’s what I like about the barbershop the most.”

The smell of aftershave is a manly thing.

“There’s a lot to be said about letting your job be your job,” he adds. But it’s hard to buy into that philosophy, because his barbershop is such a detail-oriented, eclectic space—it’s a far cry from Great Clips. “Music or barbershops, it’s all an evolutionary project,” Danburry says. “I was in school and gave $5 haircuts, which is, honestly, the worst thing you can do ... I charge what I charge and have this space because I can create what I want here.”

And he’s creating a new space musically for himself, as well. The next Drew Danburry album, Becoming Bastian Salazar, is about the death of Drew Danburry. “It charts how one goes from good to evil, from hope to despair,” he says, adding that it’s semi-autobiographical—fairly dark, dealing with cynicism and self-loathing.

“I think it’s a pretty healthy platform, though,” Danburry says. “In a way, I’m fighting for my humanity with this album.”