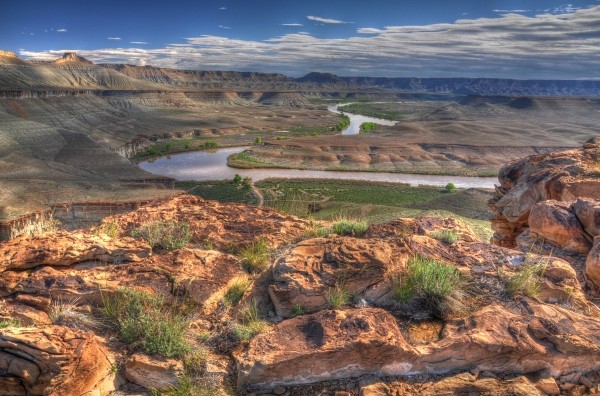 In early March, state leaders flipped a symbolic bird at the federal government when Gov. Gary Herbert signed into law bills demanding the federal government relinquish 30 million acres of public land to state control for energy development. Since then, the Department of the Interior’s Bureau of Land Management has given a preliminary thumbs-up to a pair of massive projects that, combined, will open up nearly 5,000 new natural-gas wells in the Uintah Basin.


While one of the projects has been hailed by environmental advocates as a compromise between development and conservation, the other project, by oil and gas company Gasco Energy, Inc., will thwart potential protections for one of the country’s largest roadless wilderness areas and will have wells and development encroaching upon Desolation Canyon.


That project was rammed through with little dialogue between advocates and the government, with the Bureau of Land Management shelving a proposal that would have kept 200 wells away from the entrance to the canyon, the put-in point for a popular float route taken by rafters of the Green River. Instead, more than 1,298 wells are set to cover over 9,466 acres of largely untouched—but unprotected—wilderness across Uintah and Duchesne counties.


Environmental advocates say politics run deeper than any drill when it comes to the approval of controversial energy projects. But Southern Utah Wilderness Alliance attorney David Garbett says it’s not drill-happy Republicans in state government who are to blame for approval of projects like Gasco’s, but President Barack Obama, who’s usually facing criticism from Republicans for sacrificing the economy for the environment.


“We’re in an election year and there is a pressure that could be summed up as, ‘Drill, baby, drill,’ ” Garbett says. “I think this administration and its civil servants are wary of being tarred as doing anything [negatively] affecting oil and gas prices.”


Garbett says Gasco is the perfect example of the administration’s willingness to rubber-stamp the expansion of existing development. Garbett says Secretary of the Interior Ken Salazar decided to move ahead with the Gasco project, one of the most harmful projects on the table.


Out of six possible proposals for development, the Gasco plan would develop on 24 percent of the land in the area recognized to have wilderness characteristics that would otherwise been eligible for federal protection. Only one other proposal would have developed on more land with wilderness characteristics—35 percent—according to the impact study. The other proposals would have developed on between .02 percent and 16 percent of the wilderness.


The Gasco plan was first put out for public comment in 2006, but it wasn’t until 2010 that a draft proposal was released. That first proposal was criticized by the Environmental Protection Agency for not doing enough to address air-quality concerns.


“We are in step with the EPA on Gasco,” says Beverly Gorney, a spokeswoman for the state BLM office. She says that despite the protests of the EPA on the first draft, the BLM has worked with the agency to improve air-quality standards and has won the EPA’s support for the current proposed project for Gasco. She also says the proposal would have no rigs or equipment in the canyon or visible from the road leading to the canyon.


SUWA’s Garbett, however, says the rigs would be visible from where those floating the river would put in their boats for the trip. He also says that with roads and energy development there, it prevents Congress from designating areas around the canyon as federally protected, even though the BLM itself has acknowledged the area has characteristics of wild lands deserving of federal protection.


Garbett was impressed, however, with the recent agreement between the BLM and the Anadarko Company to develop 3,675 wells in the Greater Buttes area south of Vernal. That was an agreement, Garbett says, where the company met with SUWA and brokered a deal on responsible development and even drafted a conservation easement to limit development on private land in the project area. Garbett says Gasco, however, never met with SUWA, and never had to, as federal regulators basically gave them everything they wanted.


Lee Peacock, director of the Utah Petroleum Association, the lobby group for the oil and gas industry in Utah, sees politics as a factor, but he’s not complaining about the results in these cases.


“The oil and gas industry is the biggest single sector of employment and economic growth for the Uintah Basin and has been for decades,” Peacock says, adding that the industry’s investments have also helped the state as a whole remain on stable financial footing in comparison to other states that have struggled through the down economy.


That’s why Peacock is happy with the new projects being readied for approval by federal regulators.


“It is a welcome sight to see some major projects approved and be able to move forward,” he says. “This is a good thing all the way around.”


For others, Obama’s political permitting is a mixed bag. Garbett applauds the administration for taking
more care in its permitting of new projects. He says that since Obama took office, administrative protests filed against approved projects are down significantly—a sign, he says, of fewer advocates challenging questionable projects. But when it comes to allowing existing companies such as Gasco to expand their operations, he says this administration’s judgment is not much better than the Bush administration’s.


“Why on earth are they considering moving forward with a project with such a devastating effect on one of Utah’s crown jewels, of not just wilderness, but also recreation?” Garbett asks.


See an actual and virtual tour of Desolation Canyon from EcoFlight:

Julianne Waters, an environmental advocate with nonprofit group Peaceful Uprising, says she feels the Obama administration was naÃ¯ve in thinking it could reform an industry with such close ties to Congress, and sees the Gasco project as an unnecessary conciliation to Republicans.


“Desolation Canyon is a huge draw for people on the river. [But] imagine looking out over pristine wilderness and seeing stinking oil-drilling rigs and these massive trucks just crushing this fragile wilderness,” Waters says. “We need to do an about-face in this country on energy, and I think Obama could be pushing that way more than he does now.”

Comments are being taken on the Gasco project until April 16. E-mail comments to BLM_UT_Vernal_Comments@blm.gov or call 435-781-4400.