Patterson Hood's too busy having adventures to write about them—yet. 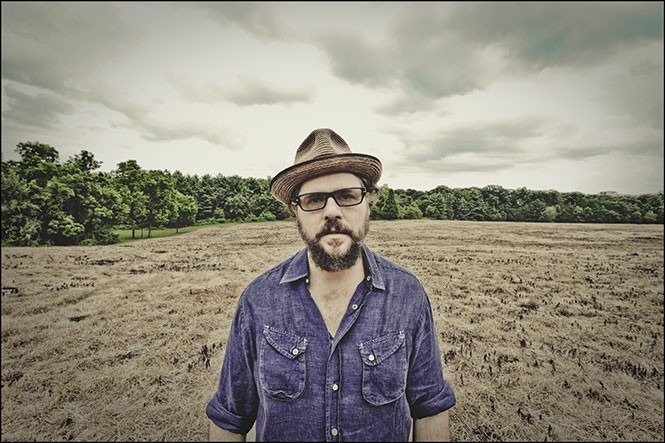 Patterson Hood is aware that his band, Drive-By Truckers, will be turning 20 next year. He's aware, but he doesn't dwell on it.

Even if he had the temperament, where would he find the time? On a solo tour while simultaneously writing and recording a new Truckers album, Hood is too busy thinking of his era-defining, alt-country band's future to spend much time looking back.

Hood formed Drive-By Truckers with his longtime friend and musical partner, Mike Cooley, in 1996 in Athens, Ga. Hood noted that last August, he and Cooley hit a milestone of their own: 30 years of playing together. "We didn't really commemorate it very much at all, other than I think maybe we said something about it one night live or something," Hood says. "I'm still thinking in terms of how we're looking forward more than back."

In fact, even as he takes a minute to look back, the nagging worries of a busy musician keep snapping him back to now. The Truckers' latest release is a sprawling live album called It's Great to Be Alive!, and it covers the band's long discography pretty succinctly—featuring at least one song from each of their 10 studio albums and even going back to Hood and Cooley's former band, Adam's House Cat. It was released in October, but the manufacturing company can't seem to get the vinyl release pressed in time, a common problem for artists working in an age when wax is hot again.

"Hopefully, the vinyl will all be manufactured by June," Hood says with a laugh. "I'll probably still be waiting for it to trickle out of the fuckin' manufacturing company. So, that'll be my celebration."

Supply hiccups aside, the Drive-By Truckers are in a really good place as a band, Hood says. In just the past few months, they've harnessed the energy to write and record a good chunk of the new album already. Just recently, the band was able to record nine songs together in a three-day stretch. Hood plans on playing some of those songs on his solo tour.

Playing solo after the band's own tour wraps up at the end of the year has become somewhat of a tradition for Hood in the past couple years. "It's just fun," he says. "It gives me a chance to play the songs from the solo records and pull out some other Truckers songs in a more intimate setting—and also come in with some new songs."

About those new songs: If all goes according to plan, Drive-By Truckers fans will be able to hear the band's 11th studio album sometime in 2016.

Hood describes the record as more contemporary in its themes than anything they've done before, and the past year or so of American politics has given the Truckers plenty of material to work with. "It'll probably be pretty timely being an election-year record," Hood says. One of the songs on the record was inspired by an essay Hood wrote in The New York Times Magazine this past summer, which addressed the controversy of the Confederate battle flag following June's racially motivated massacre in Charleston, S.C.

Hood is a prolific writer in media outside of songwriting, but his work will often help to inspire new music along the way. Just as he has with his music, Hood's writing digs deep into the complex heritage of the American South. Hood wrote in his Times essay: "The South loves myths and legends, and while they may have roots in the truth, they often overlook certain complexities. ... As a songwriter, I've spent the better part of my career trying to capture both the Southern storytelling tradition and the details the tall tales left out."

Beyond that, there are piles of unpublished stories and a few screenplays and novels he still tinkers with when he has the time. Hood's most recent solo album, 2012's Heat Lightning Rumbles in the Distance, was actually born out of an autobiographical novel Hood was working on about being a struggling musician in his 20s. The idea was to break up the narrative with songs written by the main character. Pretty soon, the songs began coming easier than the story. "It feels important to my growth as a writer to try these things," Hood says. As for the story itself? "I don't think that one's meant to be," he says.

Hood isn't sure if he's ready to sit down and have another go at writing about his own past. Not yet. "I've had a pretty great adventure, but, right now, I'm still more into having it than writing about it."