Diary of a Wimpy Kid author Jeff Kinney goes on the road for a safe, spooky in-person event. 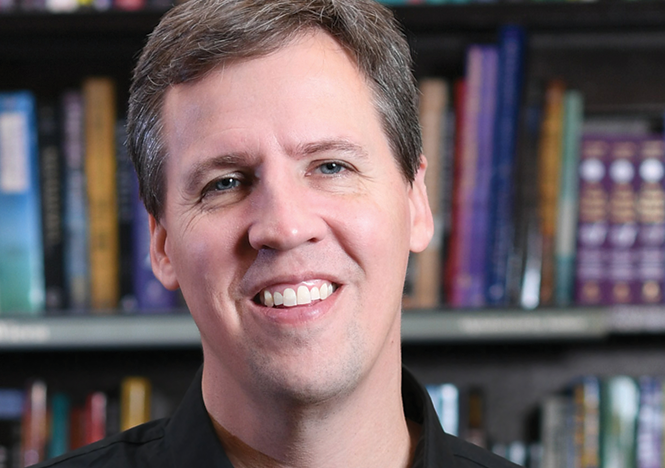 Like all of us, Jeff Kinney—author of the best-selling Diary of a Wimpy Kid book series—has gotten tired of being separated from other people, including his readers. While remaining safe, Kinney has come up with a creative way of interacting in person with Wimpy Kid fans by means of a "drive-thru" tour, which visits Salt Lake City this week to promote his new book, Rowley Jefferson's Awesome Friendly Spooky Stories. Kinney recently spoke with City Weekly from his home in Massachusetts about the tour, how his work routine changed during the pandemic, and branching out from the Wimpy Kid formula.

City Weekly: As the lockdown started last year, there was this narrative that certain kinds of people and certain kinds of occupations would be affected more than others, and maybe someone like a writer would just be going about business as usual. What changes, if any, did the past year have on when and how you work?

Jeff Kinney: In some ways the pandemic made things easier for me as a writer. It slowed things down, got me off the road. I was planning to go to Brazil, China, and those things were cancelled. In other ways, it made it harder. I have high school-age kids at home doing remote learning, so most of my writing in the past year, I did at the cemetery. I took a blanket and a bag of Skittles and Oreo Double-Stuff, and worked there.

CW: How did they idea of doing an in-person tour come about?

JK: It started with the idea that I really wanted to do something physical. Kids are stuck looking at talking heads all day on screens. I live in two worlds: I'm also a bookstore owner, and just about every night we do Zoom events. But for me, I really felt like I had to be out there in the world. For me, it was kind of a psychological need. ... It started off very modestly in the summer—in August I rented a van, and bought a 9-foot grabber tool. Cars would drive by and I'd use it to hand books to kids. In fall, I really ramped that up. The drive-thru became kind of a tunnel that felt like you were underwater; we had sound effects and giant beach balls. Then I'd hand kids their books at the end of a diving board.

CW: What has the response to the events been like?

JK: What was really interesting was, families came out to the event, brought grandma and the family dog. So now I'm reaching a lot more people. On average, there might be about 800 people at a live event [before the pandemic]. Now we're doing 200 to 250 cars, with four or five people per car.

CW: Did being a bookstore owner yourself have an impact on why you wanted to go out and do an in-person tour?

JK: That was important to me. Most of the bookstores that we partnered with, it was the first physical event that they've had since the pandemic. It can be very helpful.

CW: The Rowley Jefferson books seem to be an example of having the best of both worlds—being able to keep working within this popular universe you've created, but tell really different kinds of stories. How do you navigate between satisfying the fans, and a creative person's desire not to get stale?

JK: I think in a way, the template has really been set for the regular Diary books. The theme changes, but the formula stays the same. For the Rowley books, each one is different and surprising. So far, we're three for three on that.

CW: While this is a book of funny-scary stories, why was the choice not to release it in October?

JK: I would never want to write a book that would only work in one month. I consider those sort of novelty books. When you think of sort of a classic scary story, you don't think of them as being just "Halloween stories."

CW: For the stories in the book, you're working with some familiar horror archetypes, but in a light-hearted way. How did you go about approaching them?

JK: In this book, my rule of thumb was to subvert, then subvert again. The typical zombie story, for example, there's an invasion, then people fight for their lives, and there's a few people left standing. That's every zombie story. So, what if instead, the people just let them in? Rowley's point of view is very positive, so that made sense for him. ... Quite accidentally, I made discoveries about these types of stories as I wrote them. I didn't realize that werewolf stories were rooted in puberty until I started writing. A lot of people have had embarrassment at school related to puberty. And a lot of the stories end up like that. Each of these archetypal stories, the reason they endure is they speak to some sort of truth about the human condition.