Dudes to the Back

An educational rant for guys who like music from a girl music editor. 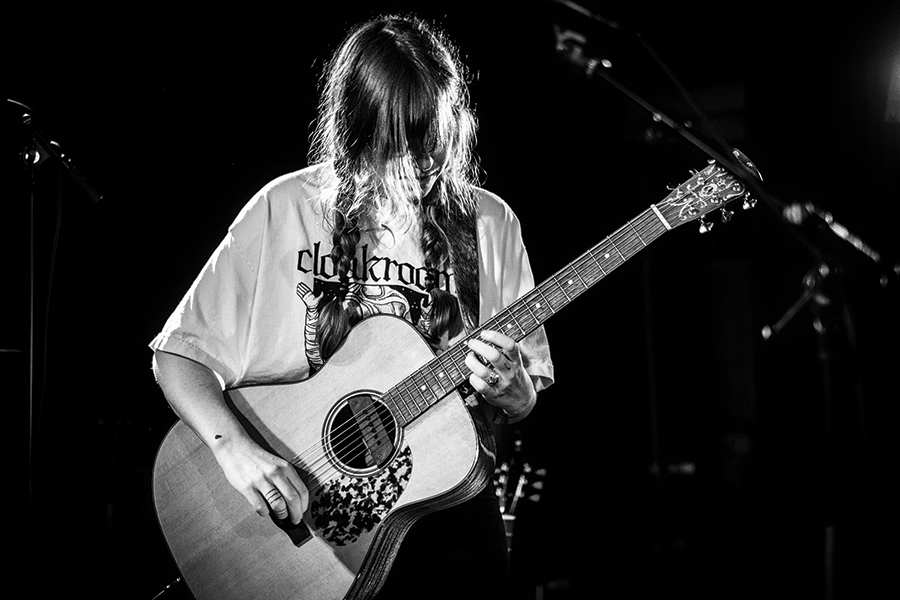 There are myriad ways I could have been inspired to write this piece, but the catalyst was a rather ironic experience at a show recently—Emma Ruth Rundle at Urban Lounge earlier this summer, to be exact. She's on her way to being prolific, like PJ Harvey, with her moody, gothic folk rock, and I was excited to see her. See her I did, but in the disrupted way that most women have experienced at a show: I, a powerful, music-loving woman, watched Rundle, a powerful woman who plays music, from behind and between the shoulders of two tall men in front of me.

Since I began going to shows, I've loathed this phenomenon of men—particularly, like, really tall men—not seeming to consider that their height is disruptive to people around them, especially shorter people. But it's not just matters of size that bother me; it's lack of awareness in general. There's a reason that the '90s riot grrrl battle cry was, "Girls to the front!" It's not just that we can't see, but that we're not even seen, either physically or as music fans. These are some of the ways in which women continue to experience sexism in music still in 2019, and what can be done by our bros to break that cycle so I can see the damn show, unimpeded.

Going out in public as a woman isn't ever easy, and nowhere is this more apparent than at a live music show. Once, while occupying a fairly empty room and watching a lounge set I'm fond of, a bystanding fellow leaned over to ask if I was dating someone in the band, because I was watching "so intently." He was incredulous upon my answer that I was there for the music. Ciera Agnello, from local up-and-comers Lube, has experienced much of the same; "When I was on tour I had multiple men ask if I was 'with someone in the band,'" she says. Questions like this show that women aren't perceived as "normal" in a musical space, that there's no way we're really just there for the music. I can promise that this happens a lot beyond these two anecdotes, and that it's something that should be easy to stop. If you're reading this and think it's whack, and also happen to be a guy, call out your friends and tell them it's rude. We all know guys take other guys more seriously. (Should I have changed my name to "Aaron" for this story?). Men do need to play a role in making sure other men know that they're not the only ones who appreciate music.

If this sort of attitude—that women are just at shows to get guys—persists, it can, and often does, result in men prowling shows for women to outright harass. SLC vintage guru-turned ex-pat Kristen Thomas, who lives in Spain now, tells of a particularly harrowing time at a show at a downtown venue. "One of the local musicians told me straight up that he wanted to 'shag' me," Thomas says. "I kind of ignored it and kept talking to the other people around, and he said it again to me." The man ended up following her into the bathroom, and after she escaped his attempt to lock her inside with him, her boyfriend did indeed chase the guy around the bar.

"[This] happens a lot in many music scenes," Thomas continues. "Shows should be a safe place where we, as women, can enjoy the goddamn music." Fellas, save some guy from having to run around a crowded venue after a creep, and just tell your friends it's not OK to be a creep in the first place.

Eve Asplund, formerly of a now-defunct local band, left her band after she was repeatedly told she just didn't look like a "real" performer, among other things. "I have not been on a stage since," she says. "A few of my friends were still in the band and never stood up for me once."

One has to ask who's doing the gatekeeping there, about who looks right and wrong on the stage. I looked up the band in question, and if their pictures are any evidence, apparently they think "performers" should just be boys like themselves.

It's also important to note that it's not just (cis-gendered) girls who get excluded from scenes, but anyone who deviates from the "norm" (i.e. dude with guitar). Queer folks across the gender and sexuality spectrum are also regularly disrespected and harassed, too. When men refuse to respect us, or defend us from people who don't, we have to work harder to maintain our spot—a spot we deserve.

Some guy reading this might want to interject that they're not shitty, and they bought their ticket, so why can't they stand up front? To which I'd say: For decades men have occupied the front, catcalled even the women above them on stage, belittled women's interests in music. And for that, it's about time at least one guy makes some personal sacrifices as reparations. Take a dig on any music magazine's archives from the 2000s and earlier; you'll find heaps of misogynist reporting. In 2019, an unbelievable number of women are leading the way in many genres, and that diversity is the future.

Grumble if you want to, but do it in the back. I'll be watching the show.