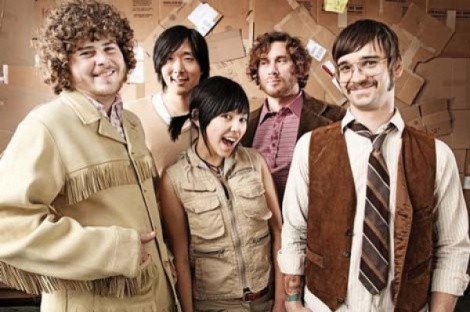 Dusty Rhodes and Co. have become semi-fixtures on the Utah live music circuit, whether headlining small bars or opening for bigger acts on luxurious stages like Red Butte Garden. The soulful SoCal roots-rock crew never met a stage it didn’t like, or a musical style it didn’t want to pillage and mutate into something entirely new. That relentless desire to perform has turned Rhodes and the River Band into an undeniably entertaining attraction, with lyrics about lost love, drunken nights and murderous geriatrics set to lovely, pompous tunes laced with mandolins, accordions and horns. And Rhodes’ smoky croon ain’t a bad instrument, either. How hard-working is this sextet? They’re doing two shows in one night when they visit Salt Lake City. Psychedelic Horseshit and Green River join them on the bill at Kilby Court; God’s Revolver and Broke City join them at The Urban Lounge. Kilby Court, 741 S. 330 West, 6 p.m. $8. The Urban Lounge, 241 S. 500 East, 9 p.m. $8

Sandria Miller Photography Show
Technically speaking, waxing breathlessly about a cool photo exhibit doesn’t really belong in our Music Live section. But, Miller’s photos capturing the ’80s SLC punk-rock scene will appeal especially to local music lovers. Miller was an art student at the time, not necessarily a member of the Salt Lake City “underground”; that probably explains why she had the foresight, and necessary sobriety, to save her stunning black-and-white images of beloved Utah bands like Bad Yodelers and Box Car Kids, along with touring acts like Dead Kennedys and Black Flag, as they played joints like the Painted Word, Indian Center and Speedway Café. Her shots of the fans are at least as interesting as those of the bands, if not more so. The show is only up until May 1. And guess what? The Tin Angel has live music all weekend long, so you can enjoy a bite and some tunes courtesy of Will Roney (Thursday), Patrick Briggs (Friday) and Gaylen Young (Saturday) while you check it out. Tin Angel Café, 365 W. 400 South, music at 7 p.m.

As Tall As Lions
The only reason I listened to the most recent As Tall As Lions album, You Can’t Take It With You, is because of the cool album cover art that reminded me of something Ralph Steadman or Terry Gilliam (in his animation days) might design. But I’m glad I did, because I found a set of smart symphonic pop that is ideal for headphone afternoons. Led by singer/guitarist Dan Nigro, the New York City quartet deals in lush sonic experimentation full of off-kilter percussion, much of it allegedly inspired by a band trip to see Fuerza Bruta: Look Up, an acrobatic performance-art piece set to bruising dance music. The band never lets its love of an odd sound get in the way of its melodies, though, and songs like “Sixes and Sevens” and the album’s title track stick to the ribs, slyly insinuating themselves with an inarguably pretty presentation, even as Nigro takes lyrical inspiration from unusual sources, like Daniel Qunn’s 1991 novel Ishmael, about an omniscient, philosophizing ape musing about humanity. Bear Hands opens the show. Club Sound, 200 S. 600 West, 7 p.m. $10 advance/$12 day of show

Red Sparowes
There’s a time and place for everything, and, for me, the time and place for instrumental rock music is usually “never” and “anywhere I’m not.” But, there are always exceptions to these rules—especially arbitrary and silly rules—and the Red Sparowes are a prime example of my need to be more accepting of the genre. The L.A. quintet boasts three guitarists, a bassist/pedal-steel player and a drummer, and their songs veer from hauntingly ethereal to bombastic and hallucinatory. They work the whole “Wall of Sound” thing with skill. The band’s 2008 EP, Aphorisms, is the one that sucked me in, and their new full-length, The Fear is Excruciating, But Therein Lies the Answer, proves that instrumental rock can be considerably better than simply “background music.” Fang Island and Caspian are also on the bill. Urban Lounge, 241 S. 500 East, 9 p.m. $10

Archeology
Portland duo Jason Davis and Daniel Walker—better known collectively as Archeology—have only known each other for a year or so, after the two “sons of preacher men” met at an archaeological research site in eastern Washington. The year has seen them release a series of EPs to much acclaim in their hometown, and culminated with the March release of Memorial, a stirring full-length slathered in folk and roots-rock. And while both Davis and Walker have left their childhood religions behind, they kept a healthy respect for hymnal harmonies that turn relatively straightforward songs like “Wooden Ships” and “Hunter” into beautifully intricate listens. James Belliston opens the show. Outer Rim, 996 S. Redwood Road, 7 p.m., $8