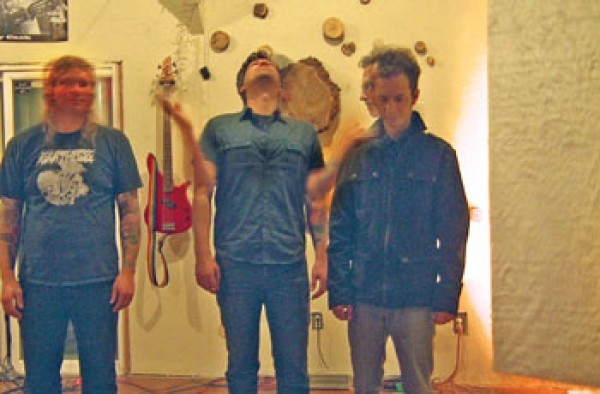 Within the past year, local three-piece Dwellers have made a rapid ascent—not because their music touches listeners’ hearts, but because it hits their guts, with the band’s self-branded bunch of “gut rock”—decisive—tunes.

After three years of paying dues, Dwellers have gone from being virtually unknown to recording an anticipated album and acquiring an invitation from Small Stone Records to play a gig in Austin, Texas, at South By Southwest, the annual music, film and interactive festival and conference.

The band started in late 2009, when lead singer/guitarist Joey Toscano (Iota, Mudfly) and drummer Zach Hatsis (Laughter, Pretty Worms) started jamming together and recording in their spare time between other projects. Early on during their sessions, Hatsis and Toscano jokingly called the music “gut rock,” a term that’s stuck with them throughout the group’s time together.

“[The term is] a way for us to remind ourselves that creativity should never be impeded by indecision, or by some desire to write music that will fit in with some type of genre,” Toscano says. “We write what we feel, and we try to stick with our gut instinct on what sounds right.”

These jamming sessions eventually became the basis for Dwellers’ debut EP, Peace, and Other Horrors. The album consists of four tracks of instrumental music recorded between 2009 and 2010, which include odd varietals like noises from a cardboard box and a leaky faucet, along with randomly placed quotes from films.

“We just came up with various ideas on a single theme and went for it,” Toscano says. “I was reading a nonfiction work at the time called Empire of the Summer Moon [an account of the 40-year battle between the Comanche Indians and white settlers for control of the American West]. That subject matter is what inspired the songs to be performed in the style they were.” The album was released on Bandcamp in June 2011 as a free download.

While finishing up the first EP, both men realized their small side project was slowly starting to become serious, prompting them to find a bass player to complete the ensemble. The two picked up Dave Jones (Oldtimer, ABK Band), whom Hatsis had played with in SubRosa for three years, helping lock up the rhythm section before almost immediately diving into writing and recording the next album.


Prior to hitting the studio, Dwellers tracked several DIY pre-recordings in their private studio, planning their songs in advance before plugging money into professional studio time. The group went with Andy Patterson and his South Salt Lake studio for the official recording, and he helped them hammer out most of the instrumentation over a weekend, allowing for another few weeks to be spent on the vocals and various fine-tuning.

Hatsis recalls these sessions as being “definitely one of the most fun I’ve been a part of. As far as the performance of the record, we tracked the majority of it live, rather than piecemeal. So what you hear is what you get.”

Salt Lake City visual artist Sri Whipple, who has created covers for Laserfang, INVDRS and The No-Nation Orchestra, did the artwork. The three members are draped in worm-like creatures that are coming out of their stomachs—fitting artwork for an album named Good Morning Harakiri.

And this album is not filled with the ambient Southwestern rock from the first EP; Dwellers instead crank up the guitars and kick into loud, bluesy rock. At times, the six-track album borders on old-school grunge, slow and dredging with tense vocals and an overpowering presence. Everything seems to be catered toward deafening the crowd of whatever small venue the band might happen to play, and keep fans coming back for more. The album is loud, pissed-off and unsatisfied with everything around it, and that is absolutely refreshing in a land of by-the-numbers rock.

The group kicked off a small Western U.S. tour, which will see them hitting up major cities in six states before arriving in Austin for their March 16 SXSW performance. Dwellers will open up the Small Stone Records Showcase at Headhunters (720 Red River St.), along with Backwoods Payback, Gozu, Lo-Pan, Suplecs, Dixie Witch and Tia Carrera. “We’re excited to play [SXSW] … and nervous,” Toscano says. “Austin rules in the springtime, and we’ll get to see a lot of great bands.”