Verbatim: A scene from a day in the life of SLC’s Eagle Twin. 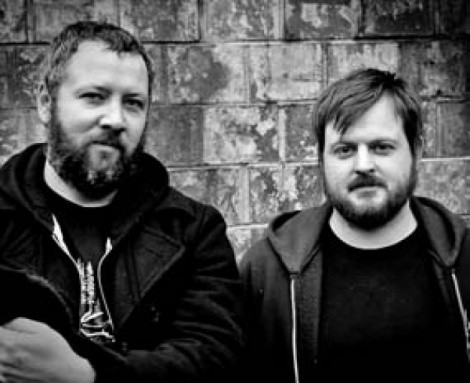 Eagle Twin are Tyler Smith and Gentry Densley: a two-piece metal band from Salt Lake City on Southern Lord Records. A van is an enclosed, box-like motor vehicle having rear or side doors and side panels for transporting people and/or goods. President’s Day is the common name for the federal holiday officially designated as Washington’s Birthday, celebrated on the third Monday of February. Eagle Twin are inside a van, making repairs, on President’s Day.

Tyler Smith: You know what I don’t have? Memory. Or an attention for detail.
Gentry Densley: Mm-hmm.
TS: That’s why when I get on something, I keep going. If I stop I’ll be like, “Oh, what do I do?”
Curtis Jensen: Did you call for your card?
TS: Nah. I should probably get on that. I’ll probably just call and cancel it. I think I left it at Pick ’n’ Pull, and somebody—
CJ: What bank do you have?
GD: Elephantitis.
CJ: Elephantitis of the—
TS: Yeah, I should probably call Zions.
CJ: Umm, you think you are going to get it back?
GD: What the fuck?
TS: I bet they’re closed, though, huh—the bank?
GD: Oh, yeah, today. But there should be … services. That girl was pretty cute at the Pick ’n’ Pull.
TS: The one that was getting shit from the fuck that bought tires from Pick ’n’ Pull?
CJ: [laughs]
GD: [laughs]
TS: I was thinking: Are you the most retarded human on the planet? You bought tires and wheels from Pick ’n’ Pull, and you are bitching about it, that you’ve got to get them realigned.
GD: [laughs]
CJ: [laughs]
GD: They pulled them off a wreck—
TS: I mean, what could you pull them off of? A wreck? It’s a loaded question; it doesn’t even matter what you pulled them off of. You’re a [stumbles] homo fucker.
GD: Homo?
TS: Here, hold this.
CJ: [laughs] OK, question No. 1. Where are we?
GD: Right by the CA-160.
TS: That’s this thing, man. CA-160 air filter.
GD: I blew Tyler’s mind.
TS: Yeah, I pulled this off, and he’s like, “What is this, a CA-160?”
GD: [laughs]
TS: And I’m like, “Yeah.”
CJ: [laughs]
TS: [laughs]
CJ: So, what are we doing?
TS: We’re putting a new heat gauge in the van. Not a heat gauge; that’d be a thermostat. This thing, temperature control pedumbomater …
GD: While he’s doing that, I’m reattaching the stereo in that end. Re-wiring it.
TS: Pedominator.
CJ: Uh-huh.
TS: You know what the hell that is?
GD: And we rigged this guy up so that when you turn the van off, it’ll turn off, so you won’t keep drawing power.
CJ: So it has like a—
GD: Yeah, it just goes in there when it goes off.
CJ: Who is Eagle Twin? Or what?
GD: A mighty god composed of two mountains—
TS: [laughs]
GD: Who rises from the Earth, and on a foggy day …
TS: You’re not writing this down?
GD: ... He can see for miles!
TS: [laughs]
CJ: It’s on tape, man! [laughs]
TS: Oh, OK. I see, we’re—
CJ: It’s all on there. Every little bit.
GD: Eagle Twin, the funny thing is, uh, Randall [Dunn], the guy who recorded us, told us, when we were in the studio, he had this buddy, I think he was Lakota or something, from North Dakota, and he said, “What are you doing, Randall?” And Randall said, “I’m recording Eagle Twin,” and he said, “Awwwggh, Eagle Twin,” and then he said something like, “You know, two mountains rise to two eagles; we are all one.”
CJ: [laughs]
GD: The twin of Earth, on Earth. He related to it somehow.
CJ: Some way.
TS: I may have fucked that up pretty good.
GD: Yeah.
CJ: Who is Eagle Twin?
TS: I’m Tyler Smith.
GD: I’m Gentry.
TS: Why are there two of them?
CJ: [laughs]
GD: Two of what?
TS: Because I fucking spliced the wrong goddamn wire! Fuck you in your retarded face, Tyler!
GD: Are you kidding me?