Convincing bibliophilia makes up for a lack of conflict in The Bookshop. 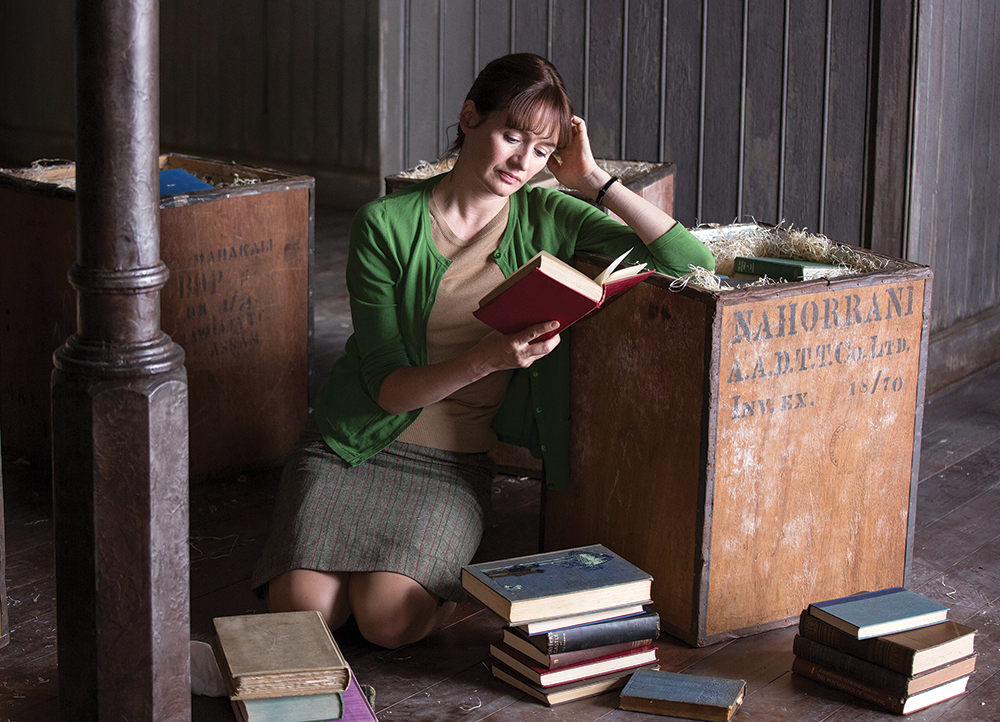 Bookishness is not a quality that translates well to the screen: the quiet comfort of solitude, the strength introverts gain from being alone, Thejoy of curling up with a good book and getting lost in another world. The elusiveness, the peculiarly internal stillness and withdrawal from the world—and from oneself—that delving into another human being's thoughts and psyche brings. Is there anything less cinematic? And yet Spanish writer-director Isabel Coixet (My Life Without Me) manages to capture a hint of that with The Bookshop, in how she eschews the easy comfort we might expect from a storythat is, on its surface, pure twee historical-costume-drama escapism.

In the 1950s, war widow Florence Green (Emily Mortimer) relocates from London to a conservative seaside English town with plans to open a small bookshop.She faces opposition from local queen bee Violet Gamart (Patricia Clarkson), who cannot abide competition for the title of Most Cultured; she is welcomed bybook-loving recluse Edmund Brundish (Bill Nighy), who becomes her first customer; she finds an ally in pragmatic youngster Christine (Honor Kneafsey),whose job as shop assistant might be expanding her heretofore limited horizons, etc. There's not much unexpected to be found in a bare descriptionof the plot.

But the treasure who is Mortimer strides through the unspooling of that plot with the sort of grace that comes from self-possession—Florence is adetermined woman, and has no time for petty nonsense that wants to thwart her—and yet also with the sort of awkwardness that comes from beingsomeone who prefers the company of books over that of people. (Disclaimer: Not all readers are like this! Even Florence isn't all the time. But, book-lovers, you will feel seen by this movie.) The scene in which Florence first encounters Violet, at a soirée at the wealthy woman's home, is beautifullyshot by Coixet. Cinematographer Jean-Claude Larrieu uses handheld cameras to create a slightly jarring ambiance to highlight Florence's discomfort inthis posh and suave crowd, and in her own self-conscious dressing-up to fit in. The embarrassment with which she had previously declared her newparty dress to be "too red," too likely to draw attention to herself, comes flooding back here, too.

Of course, there are moments of coziness. This is a movie about the love of books to the exclusion of almost all else, and Coixet lingers with nerdydelight on piles of books and shelves of books and books beautifully arrayed in the shop window. Florence's establishment is very much a place that onewould happily wander for hours browsing. But the off-kilter way in which Coixet depicts Florence's interactions with other people—with lots of longuncomfortable pauses—brands her as an outsider not just physically, but in spirit. It's oddly appealing, perhaps in the same way that book loverscherish their eccentricity. The love of books here is not a universal one, but a secret shared among the chosen few, which seems like hardly the bestfoundation for a business venture, but that's a mystery of book culture, too.

The Bookshop—based on the novel by Penelope Fitzgerald (which I have not read)—isn't entirely successful as a story. There's a surprising lack ofconflict, which is a terrible problem. Violet's battle against the bookshop doesn't really ramp up until the final third of the film, though Clarksonbrings her usual delicious bite, and the enigma of Mr. Brundish rather fizzles. Nighy, more restrained than he typically is, has a gentle charm. Thefilm is weighed down by unnecessary narration delivered by someone who isn't identified at all until the very end of the story. The bewildering mystery of those ofsmall minds who can't handle the likes of Vladimir Nobokov and Ray Bradbury—with whose works Florence scandalizes the town—could use morepointed exploration, particularly when small-mindedness is a disease that continues to inflict our culture today. But as mood piece and a character studyof an on-screen rarity—an earnestly cerebral woman—there are pleasures aplenty here.