Eat, Drink and Be Merry 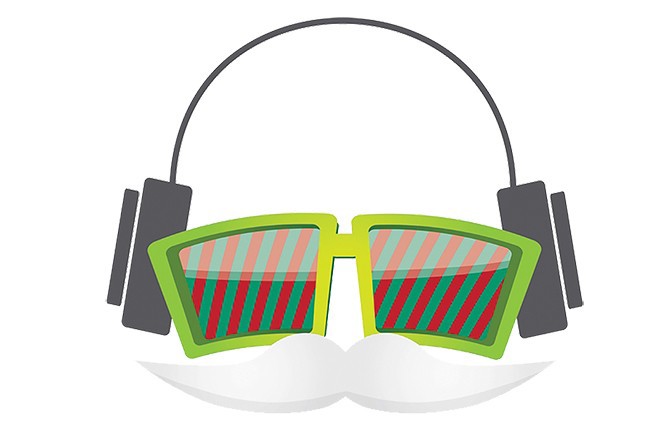 It won't be long until America inaugurates President Grabberpussy. When he takes the oath of office, it'll be really real: The wackadoos are at the wheel, and following too damn close. They're gonna do their best to steer the country—and the world—right into DubyaDubyaThree. It's gonna be a rough four years, so I figure all of us Whos down in Whoville are entitled to spend the rest of 2016 stuffing our faces, marinating our livers and injecting lots of the pot before getting serious about resisting the grinch-y Orange Menace. On that note, let's join hands, gather around the tree and sing a bunch of wacky yuletide carols.

Vista Blue, "Dreaming of the Right Christmas" from Check It Twice (WeAreVistaBlue.Bandcamp.com, 2016)
Simmer down, folks. It doesn't say "Alt-Right Christmas" or "Reich Christmas." Just right. The real kind. "Every December/ I hope this will be the one/ to have a season to remember/ one that's filled with joy and fun/ and we won't think about/ what we don't have/ 'cause we have all we need/ and things aren't so bad." Not only do these guys from Nashville hit the nail on the head, but they're also ridiculously prolific, having dropped 12 EPs since April 2015—all of 'em free, and all of them just jammed with killer power-pop tunes. I love this band so much, it's like I've already received a gift this Xmas. And I'm comin' to you from late November.

Torsten Kudjer, "Weihnachtszeit" from The Christmas Singles (Soundcloud.com/TorstenKudjer, 2016)
If you don't speak German, you might mistake this for a Christmas spin on "Monster Mash" and assume its about a big, hairy Weihnachtszeit eating Santa's elves like so much popcorn chicken. Well, "Weihnachtszeit" translates to "Christmastime" and the lyrics check Christmas cookies, smiling and having fun—not a giant Angela Merkel beating her chest over a candy cane-colored snowscape littered with tiny limbs. Oh well. The free five-song EP leads you to a consolation prize: Kudjer, a singer-songwriter with no allegiance to genre, is pretty cool. And prolific. Get into him.

Chris Mess, "Bong for Your Mom" from Chris Mess (Chris-Mess.com, 2016)
Full disclosure: This ain't no holiday jam. But try this out: Say the band's name like you're drunk. If that's not enough for you, well, the song is about gift-giving. And now you have an idea what to give the woman who gave you life this year. Not to mention a kickass new band in your life. Check out the whole EP by these Seattle glam-rockers (more like glam-grunge-classic metal) fronted by a creative genius who looks like a settled-down Hedwig. You'll happily part with six bucks to make it yours.

Smashy Claw, "It's Technically Possible That I'll Be Home for Christmas" from Snow & Sadness (Music.SmashyClaw.com, 2016)
Inhabiting the common space of a Venn diagram illustrating the overlap between geek-punks Nerf Herder and proto-Ira Glass nerd-band They Might Be Giants is this power pop/punk group from Longmont, Colo. In just over two-and-a-half minutes, the pair wins you over with smart-snarky lyrics, nasal vocals, overdriven power chords and muddy demo-quality production. You'll should stick around for another seven minutes and enjoy the rest of this free EP: "Booze, Boobs, Blood & Blow," "Christmunks" and "Santa Had a Heart Attack" are technically as good as "Technically."

Daniel Songer, "Rudolph the Red-Nosed Reindeer" (YouTube, 2010)
More than acting, comedy or vocal lessons, this very loud man needs help. He has hundreds of "comedy act" videos, and they're painfully unfunny—and long. But there's something about the guy that keeps you coming back. Maybe it's the pelvic thrusts. Or the way he slaps his own ass. I dunno. The way you find Songer's unusual performance of "Rudolph" is to search "Comedy Act 173 Christmas special." You could jump straight to 3:23, but the masochist/awkward humor fan in you will wanna start at good ol' 0:00. Best line: "... as he shouted out with glim." Bonus track: "Jingle Bells." You'll swear you'll never return. But you will. Bonus bonus track: "Wind Me Up (JoeyClassic remix)."

Crudbump, "Fuck You If You Don't Like Christmas" from Crudbump Singles (Crudbump.Bandcamp.com, 2015)
A glimpse into the workings of hipster rage: Sometimes you wonder how 750,000 people possibly beat you to somebody as cool as this dude, Drew Fairweather. And yet, they did. Well, heads up. Here comes a Louisville Slugger, branded "Brightside," delivering a platitude to your dome. Better late than never. What matters is that you did finally discover this slice of hip-hop/nerdcore heaven, which defends Christmas while skewering the "War on Christmas" crowd with droll, true bars like, "It's not even about Jesus/ You gotta respect the holiday," and "You don't even have to put up a cross/ You just gotta get out and go to the mall."