Munching on tacos and more at Taquería Mi Caramelo. 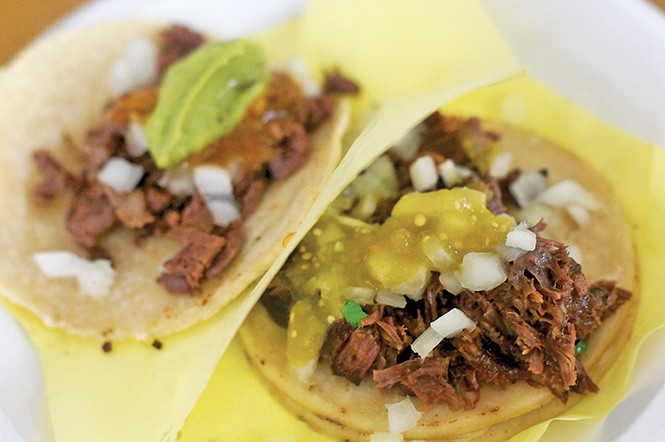 I remember my first taco. In college, buddies of mine would gather on Sunday evenings at a Mexican all-you-can eat joint called La Cafeteria. The price of dinner was $1.89. The first time I tagged along, I'm pretty sure the only things I ate were hard-shell tacos stuffed with ground beef and shredded cheddar cheese—I haven't always been an adventurous foodie.

I'm guessing your first taco was also a hard-shell version—maybe from Taco Bell or Del Taco, or homemade, courtesy of Ortega. This is not about that. We will not discuss the hard-shell type here, but rather the most democratic and ubiquitous incarnation: the corn tortilla street taco. The most popular of Mexican food in the U.S. is available to all, and the phrase meaning "to grab a taco"—echarse un taco—is, according to the book Tacopedia, also used to describe any kind of eating. That's how thoroughly they thread their way through Mexican culture, and now our own.

Food historians estimate that the taco predates Spanish colonists arriving in Mexico, and was invented by indigenous people between 1000 and 500 B.C. The first ones were probably filled with fish, and eaten by people in the valley of Mexico. Today, there are dozens of types, including al pastor, birria, barbacoa, mixiote, insect, stewed, griddled, grilled, deep-fried and more.

To enjoy a broad range of authentically delicious Tijuana-style street tacos, look no further than Taquería Mi Caramelo in West Valley. This is the real deal, and although some of the staff speaks a bit of English, brushing up on your Spanish wouldn't hurt. Google Translate is helpful in ferreting out terms like suadero, cabeza, lengua, cachete, maciza and surtido, which are among the fillings here.

This friendly walk-up restaurant is organized into separate lines, depending on which items you want. That's because, for example, the tacos al pastor are so popular that they have a line all to their own—and rightly so. Al pastor came to Mexico—Puebla, to be specific—via Middle Eastern immigrants. It's pig meat that is roasted on an upright spit, the way Greeks roast lamb for gyros. Somewhere along the line, pineapple was added to cilantro and onion to flavor al pastor, resulting in today's sweet-and-spicy treats, and the version at Mi Caramelo is second to none.

An interesting aspect of this taquería is that although there is a salsa and condiment bar, tacos are topped individually by the taqueros (taco makers) depending on the type. Tacos al pastor are topped with minced white onion, cilantro leaves and guacamole, while the tender, tasty cachete tacos (beef cheek) come with tomatillo salsa in place of guacamole. My very favorite of all the types I tried is the maciza, which is slowly stewed pork shoulder (think carnitas, but juicier). Buche, tripa and asada versions are also excellent. At $2 apiece, you can try a wide variety without breaking the bank.

In addition to street-style tacos, Mi Caramelo also makes quesadillas, vampiros and mulitas. I hadn't seen mulitas before; they're tacos made by pressing fillings between two corn tortillas and adding a hearty dose of cheese. A vampiro is a grilled, crunchy corn tortilla with toppings that gets its name from the tortilla warping into the shape of a bat's ear.

That they're open 24 hours on Fridays and Saturdays, and until 1 a.m. the rest of the week, seals the deal for Mi Caramelo as my new favorite taco joint. It might become yours, too.