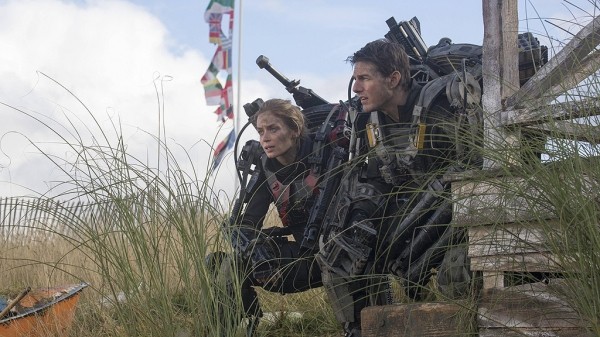 Doug Liman—director of the terrific new science-fiction thriller Edge of Tomorrow—is probably best known for propulsive action movies like Go and the original Bourne Identity. But based on existing evidence, what he really wants to be is contemporary cinema’s foremost chronicler of relationships under pressure.

Some examples are more obvious than others, of course. When Liman deviated most clearly from his background in genre films, it was with 2010’s Fair Game, the fact-based story of whistleblower Joe Wilson and “outed” intelligence operative Valerie Plame, and how the media attention on their story pounded at the foundations of their marriage. Yet there have also been few allegories about the strains on a modern relationship more effective—and entertaining—than Mr. & Mrs. Smith, which tragically has become a footnote mostly as the launch of the “Brangelina” relationship despite being brilliantly insightful about what it takes to right a teetering marital ship.

I’ll ask you to bear with me, since nothing in the basic premise of Edge of Tomorrow—adapted from Hiroshi Sakurazaka’s 2004 novel All You Need Is Kill—suggests that it has anything to do with relationship dynamics. This is, after all, the story of an alien invasion of Earth, focusing on an impending all-or-nothing, D-Day-esque military operation five years into the “Mimics’” occupation of most of Europe. Tom Cruise stars as Maj. William Cage, a military public-relations officer who gets thrown into actual battle for the first time. And when he dies in that battle, a curious thing happens: He wakes up two days earlier, stuck in a time loop where he’s able to repeat the 24 hours leading up to the attack, always remembering the events he’s lived while nobody else does.

That premise has generally been compared to a certain Bill Murray comedy, yet it’s perhaps even more reminiscent of the 2011 thriller Source Code, in which a man is sent back in time over and over again to gather the information necessary to prevent a terrorist attack. Liman and his writing team find inventive, often hilarious ways to tell this story, including montages of Cage’s repeated fail-reboot cycles, and the way he uses his knowledge of events to manipulate others. The circumstances that land Cage in the thick of battle in the first place are pretty sloppily sketched so that it makes any sense for the 50-something Cruise to be a battle rookie forced immediately into combat—the book’s protagonist is a young new-recruit grunt—but everything that follows is too energetic for it to really matter.

That includes the visual style Liman brings to Edge of Tomorrow, which charges through its “find and kill the leader” plot with impressive efficiency; it’s refreshing when a big summer movie realizes a two-hour-plus running time isn’t mandatory. The design of the alien Mimics is inventive—they’re like massive rolling virus cells, covered in frantically aggressive tentacles—and the key action sequences like the initial air drop are choreographed with a dynamic sense of real things colliding with other real things, not just CGI representations of things.

So what the hell does any of this have to do with couples therapy? It’s there, if you look, in the central relationship between Cage and Sgt. Rita Vrataski (Emily Blunt), a soldier already legendary for her Mimic-killing prowess largely because she too was once caught in a repeating loop. While the repeated days provide Cage a chance to learn from his mistakes on the battlefield and try to defeat the Mimics, they also offer him a chance to grow up. Vrataski may never remember Cage from one repeated cycle to the next, but she matters more and more to him every time. And when it begins to appear that Vrataski can’t survive a particular key moment in the cycle, his own survival starts to mean less than finding a way they can survive together.

Great genre work has always been a way to explore human nature, wrapped in monsters and mayhem to help the medicine go down. Edge of Tomorrow’s simple, smart pleasures include a look at how many screw-ups it can take to learn there may be things—and people—beyond yourself that are worth fighting for.