Elders Over Broadway: The Book of Mormon Musical

The LDS Church might be the biggest fan of the saucy, potty-mouthed musical The Book of Mormon. 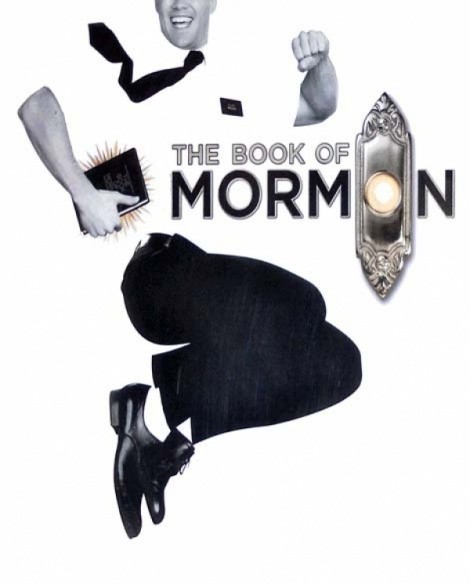 Manhattan’s 49th Street buzzes with traffic and honking cabs. The manhole covers emit steam as if on cue. On one side of the street is The Actor’s Chapel of St. Malachy’s Catholic Church, but it’s the other side of the street where groups of people begin to gather around a theater named after Nobel laureate Eugene O’Neill, ready for an evening’s entertainment at a Broadway show. Most of this scene is classic New York City, but one thing here stands out as odd: The marquee above the theater reads The Book of Mormon. It’s hard to know what O’Neill, who wrote plays that often featured a great deal of despair, would think of the building that bears his name sporting a picture of a smiling, clean-cut, young man in a white shirt and tie jumping in the air next to a sign that reads, “God’s Favorite Musical,” but there it is. Mormonism is the talk of The Great White Way with the March 24 premiere of a musical named after the faith’s favorite book.

Most people are coming because of who created the show, not for any specific religious reasons. They are fans of Trey Parker and Matt Stone, or of their animated TV show South Park, or of Robert Lopez’ hit musical Avenue Q. Patrons’ knowledge of the LDS faith ranges from next to nothing to all too familiar.

New Yorker Bruce Wolfe claimed to know nothing about Mormons while waiting to see a preview of The Book of Mormon on March 4. “I actually wish I knew more. All I know is Big Love, Mitt Romney and that BYU suspended that basketball player for having sex.”

>> Read the theatrical review of The Book of Mormon <<


Kevin Wehrenberg, of Los Angeles, said his friend is a producer on the reality TV show Sister Wives, about a polygamous Utah family, and also noted, “I’ve never met a mean Mormon.”

New York City-based actor Michael Leslie was on hand to see the show, and had experienced Salt Lake City while working at Pioneer Memorial Theatre in 2002 and touring with a production that came through Salt Lake City in 2006. “I thought everyone was very nice,” he said, “and I don’t mean that in a Donny and Marie kind of way. You have to give up a lot of your preconceived notions when you go there.”

One audience member knowledgeable about the LDS faith was Dave Smith, who was raised Mormon in Salt Lake City before having his name taken off the church records and moving to Seattle while his parents were serving an LDS mission. “I was watching South Park one night, and I saw one little commercial for the show,” he said, “and I had to find a way to come see it. I’ve never been to New York City before. It’s the whole reason we came here.”

For Mormons, the good news is their faith is the talk of America’s pop-culture capital right now. The bad news is, the mouthpiece is a couple of animators known for talking poop and a puppeteer known for puppets that have sex. The musical is clearly meant to be a satire of the religion and its missionaries, not to mention Utah culture, although the promise is that it is done in a loving way. (See accompanying review of the musical on p. 21.) That audiences would clamor to see a musical that mocks Mormonism suggests the religion is finally in the mainstream. Others argue it only reinforces the notion that Mormons are now and forever a “peculiar people.” Likely, it is some of both.

Stereotypes
Megan Sanborn Jones has studied how Mormons are perceived in popular culture going all the way back to the 19th-century melodramas when they were cast as villains who kidnapped young women and took them to Salt Lake City to be forced into polygamous marriages. As an assistant professor of theater and media arts at Brigham Young University, she now studies how Mormons are perceived in contemporary culture, and finds that while the stereotypes have improved, they are still stereotypes nonetheless. She finds that Mormons are now seen as “Boy Scouts or clean-cut Americans,” and notes, “the stereotype of the Boy Scout or clean-cut American may be just as prejudiced as some of the previous stereotypes about Mormons.” After all, stereotypes are ultimately limiting, even if meant as a compliment. Is saying that Mormons are “so nice” really just a backhanded compliment?

Nevertheless, if there’s somebody who can break that stereotype, Sanborn Jones, a South Park fan herself, thinks it could be the South Park guys. “They know things about the church and can embed things that go beyond cultural stereotypes. They can weave Mormonism into the narrative in complicated ways. They’re willing to mock and reveal what they see as hypocrisy, but even so, while they are critiquing they are simultaneously turning that critique back on itself.”

Of course, as many South Park fans are aware, The Book of Mormon isn’t the first time Stone and Parker have shown a fascination with Utah’s predominant religion. On the Comedy Central show, Joseph Smith is part of the “Super Best Friends,” a group of religious leaders that includes the likes of Jesus and Muhammad. In 2003, a South Park episode titled “All About the Mormons,” featured an LDS family with a son, Gary, who befriends Stan, one of the main characters. One part of the episode recounts the Joseph Smith story in a song that has a chorus of “dumb, dumb, dumb, dumb, dumb” after every assertion about the Mormon prophet. Stan complains about the lack of empirical evidence for the religion and that Mormons just get people to do things because they are so relentlessly nice. The next day, Gary tells Stan that while the Joseph Smith story might not make a lot of sense, “I have a great life and a great family, and I have the Book of Mormon to thank for that.” That interplay between finding Mormon doctrines and history unbelievable while also recognizing the positive effect the church can have on its members is also present in the musical.