The 2012 election threatens to sweep Democrats from Utah politics 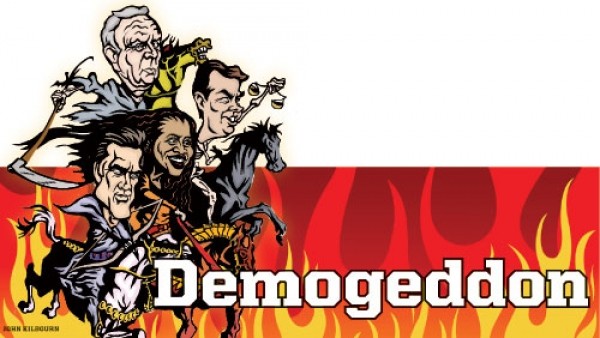 Political junkies have marked their calendars for Nov. 6, 2012, when the general election will decide the political leaders who’ll fill county seats and other offices, all the way to the White House. Some also may have marked Dec. 21, the so-called “end date” of the Mayan calendar, as well. Depending on how you look at it, Dec. 21 could mean a Michael Bay-style catastrophic ending or the dawning of a new golden era. And oddly enough, your vote could be a deciding factor.


While City Weekly doesn’t make a practice of endorsing candidates, our Election Guide will help you appreciate the urgency of casting your ballot. First, we look at “Democalypse,” a view of post-election Utah where embattled liberals not only have a Mormon running the country, but also have lost key legislative seats, the county mayor and their lone Democrat representative in Washington, D.C.


We’ve also profiled some donkeys who, to win elections, wear elephant’s clothing: key Democratic candidates who bear no shame in their conservative backgrounds nor in their decidedly moderate views. Utah’s obstinate straight-GOP-party voters might want to give these Blue Dogs a second look.


What do novels and poetry reveal about a candidate? Check out the inspiring verse of Justice Party Veep Luis Rodriguez, as well as the disturbing end-times fantasies of congressional Republican candidate Chris Stewart and the sexual frolics of characters in Libertarian Ken Larsen’s depiction of a near-death experience.


Confused about who’s running for Salt Lake County Council or why you should care? We’ve asked candidates to distill their message down to 100 words to spare you the need of deciphering their campaign literature.


Rocky Anderson, Justice Party candidate for president, talks about the need for and importance of good attorneys, especially the one who will serve as Utah’s attorney general.


With the election fast approaching and end days near, it’s crucial to learn all you can and make an informed vote. Check out “He Said, He Meant,” in which a liberal blogger has translated a speech of Mitt Romney’s, and a conservative state senator has done the same for Barack Obama.


On Election Night, follow @EricSPeterson and CityWeekly.net/Election2012 for live tweets as the polls come in and the hopes and dreams of politcos and voters are dashed/realized.


The Last of Their Kind

Democrats Who Run with Elephants

Where Are the Lawyers?