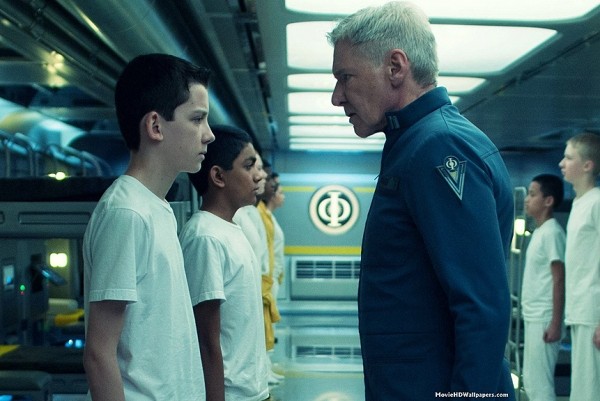 The book is better.

I haven’t even read Orson Scott Card’s book, and I know this must be the case, because there’s little here in the adaptation by director Gavin Hood (Rendition, X-Men Origins: Wolverine) that can account for how highly fans esteem the 1985 novel. For the book and its hero, Ender Wiggin, to be as beloved as they are, there’s gotta be some heart lurking in there somewhere. This Ender’s Game engages the mind—in some ways that are uncomfortable, and yet never intriguingly so—but it does not engage the heart.

I might say that that odd omission could be intentional, because the Big Science-Fiction Ideas in this strange mashup of Starship Troopers and X-Men—gifted kids go to fascist military school!—are ones that seem positive only if your heart is made of stone. Decades after Earth repelled an invasion by insect-like aliens who killed tens of millions of humans, the planet is preparing for another invasion by the “Formics,” which may or may not come by way of training all kids in tactics and strategy in the hopes of finding a new “Julius Caesar or a Napoleon” who will win the war decisively. Andrew “Ender” Wiggin (Asa Butterfield) is plucked from his regular school to attend the orbiting Battle School, because Colonel Graff (Harrison Ford) and Major Anderson (Viola Davis), who run the place, think he could be the kind of legendary-scale genius they’re looking for.

And what makes Ender stand out? He accidentally stumbled upon the strategy Earth’s leaders believe is needed to defeat the Formics: pre-emptive assholery on a personal level, and pre-emptive war on a societal one. It’s prison rules as a cultural philosophy: Gotta beat up the biggest badass in the yard in order to put him off the idea of even thinking about attacking you in the future.

Ender’s Game is all might-makes-right and justification for violence. Ender himself articulates it neatly at one point: “Follow the rules, you lose; chose violence, you win.” What just barely saves the movie as something worth a look for kids—and probably only kids; more on that in a moment—is that Ender does eventually rebel against the attitudes that his manipulative education has inculcated in him. This is far more science fiction of ideas than of action, and it demands discussion of its ideas, though in a weak sort of way, as if it doesn’t want you to question them too much.

But here’s another problem with Ender’s Game. Ender’s about-face is possible because, we’re told, he has a special sort of empathy with his enemies that helps him to understand and even love them. But we never see how this is possible, such as with the many bullies he faces in his various schools. And we certainly see nothing that would explain the empathy he comes to have with the Formics. A certain connection between Ender and the aliens jumps out at the end as an almost mystical thing that is entirely at odds with the film’s hard-science-based approach up to that point. Way too much of what is inside Ender’s head is missing in the film in order for the very dramatic ending to be plausible.

And why is Ender’s Game probably best suited to kids, at least in this version? For one, Ender’s tactics and strategies that amaze his elders don’t seem terribly ingenious. I was stunned, in fact, that all the adults here are surprised by how Ender utilizes a new weapon in a battle scenario. How can the people who designed the weapon not have had this in mind? Also, too: While it’s commendable for the film to play around with zero-g ideas—like how there’s no up or down in space—and it’s smart of Ender to have figured this out even on his first trip off the planet, it seems kind of ridiculous that the Formics appear not to have hit upon this reality. I suspect adult fans of science fiction will find much of what goes on here, science fiction-wise, to be rather simplistic.

Watch Ender’s Game with a kid, then—and talk about it afterward. Unless you’re cool with an endorsement of pre-emptive violence as a way of life.