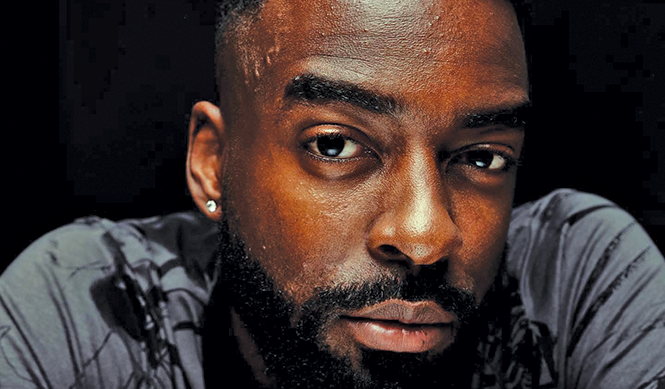 A party is not just a party, as much as it may feel like it when you're at one, drink in hand, music bumping around you. Clermont Dossous—better known as DJ Joune—knows that.

A local DJ known best right now as the official DJ for the Utah Jazz, DJ Joune is expanding his scope, past simply setting the vibes for a room or an arena with his music selections. He wants to collaborate with other kinds of tastemakers who have their own talents to offer when it comes to parties, and all that they can be. Afro Paradigm is that first attempt at collaboration, and its first event, The Interlude, will be the first test-run.

"When I started, I just wanted to play music and be free to explore, learn. That's it, that's all I wanted to do," says Joune about how he got into DJing. As time went on, he began to wonder how he could expand from creating an experience for people at house parties, to experiences that could be enjoyed by people all over the world.

As he began to navigate the world of promoting himself to clients as a brand worth paying, while balancing his own distinct creative style, he also began to realize that the intertwined natures of parties, local arts culture and our growing city could use some work. "When you go out to any regular event that has a social aspect to it, you normally don't get to meet anyone," he says. "Based on how the schedule is, or how it's set up, all the focus is on the people on stage, and everyone that's attending, they're just left standing and probably with someone important in the room—a photographer, an agency, a magazine, whatever. I haven't done anything where the focus was community connecting, and having different elements of focus, highlighting the other artists, discovering different djs..." He even wants people to be able to connect with those who help decorate an event, citing that art credits often get lost in the mix of big promoters.

With Afro Paradigm, he hopes to create an atmosphere with plenty of room for engagement—with the music folks, but also with other types of creatives and artists, local influencers and entrepreneurs, and more. He also hopes that this will build interest in Salt Lake City as a city with cultural draw, outside of the outdoor recreation that defines us.

In nabbing artists for The Interlude like Reginald Ellison, a saxophonist from Florida, he hopes to establish ties in other cities, too. "We can bring different people from different places and have them come here," he says. "For example, people in Florida are gonna see him travel to Salt Lake City, and they are going to be like, 'What are you doing in Salt Lake?'" Working for the Jazz has helped him build connections like the one with Ellison all over the country, and he hopes to spread Afro Paradigm events to places like Los Angeles and New York, too.

At The Interlude, DJ Joune will of course DJ, spinning afrobeat, reggae, dancehall and hip hop, while the programming flows through a cocktail hour that attendees can use to network and talk; a professional "portrait party;" and performances from locals like the aforementioned Ellison, singer-songwriter Karlee Crowther, and West African R&B-inspired artist Micon. "Why do we need to host this?" Joune asks."Salt Lake City is growing so fast, I'm looking left and right, and apartment building after apartment building is being built. But I don't know if the focus is also on the culture. When you first come to Salt Lake, what is the first thing you think about? The church, the mountains and skiing. What is the cool culture, what is the arts culture? What is the music scene? Is there anything that is happening that can grab people from other states to check it out?"

While members of different respective scenes may all have their own answers to these questions, Joune's fixation on the gaps he sees in SLC nightlife culture are where he's placing the building blocks for Afro Paradigm. "There's so much potential and growth," he says, "[in] food, art; there's a lot that is happening, but I don't feel like there's a vision to where we want to be in the future. Who do we want to be?"

An interlude is, by definition, "an intervening period," or, in a song, "inserted between the parts of a longer composition." A lot of important stuff can happen between the larger moments of a night out at a party. Here's to hoping DJ Joune answers all his questions, and finds new meaning in SLC nightlife, somewhere between the music and the mingling.